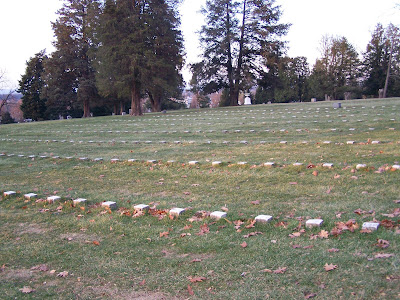 It was one of those epoch moments for me to finally get to Gettysburg just before Christmas. I have dreamed of going for years - really - and finally making it there felt very much like a home coming. I always feel very proud visiting the Mall and Capitol in Washington, DC, but I don't think I ever felt more American - and more love for my country, than I did standing at the crest of Little Round Top, looking out across the Gettysburg battlefield. There is a funny sense of ownership as an American at Gettysburg. I felt like the place belonged to me - belongs to all of us as Americans for whom it was purchased by the conviction and courage of our fellow Americans years ago.

The Gettysburg Address monument - "We can never forget what they did here." 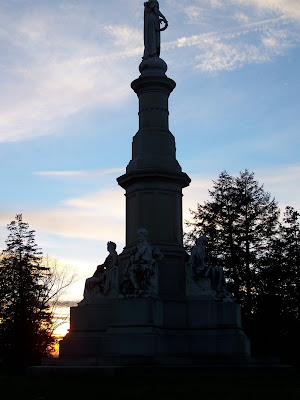 All of American history seems to come together at Gettysburg because of the state monuments all over, and the stories of how they were built throughout the years as America continued to move on but still look back at the defining moments of July 1-3, 1863. It is a funny thing for the people of Gettysburg to live there. They were just a sleepy little hamlet of a thousand people, and then, history came knocking and transformed the place forever.

A detail on top of the monument dedicated to the Pennsylvania troops who fought at Gettysburg. 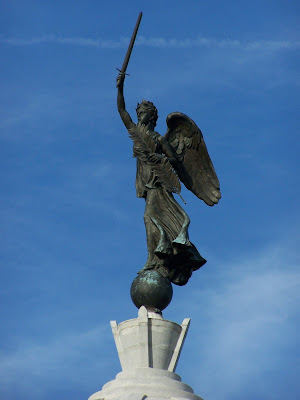 And the locals absolutely know it. Our guide, John, told us with pride that he had been giving the battlefield tour for 45 years. And he was still so full of passion and love for the place, that he gave us an extra hour of tour for free, I think probably because I knew a lot more about the place than most tourists, and he wanted to make sure I saw some cool stuff that he doesn't get to in the regular two hour tour. 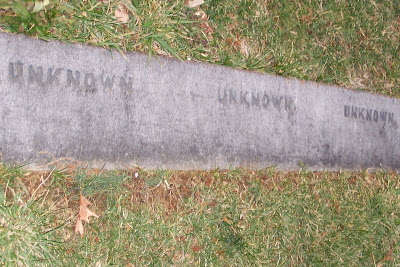 My friend Katie and I had an absolutely beautiful day for our nearly five hours of trekking from the Lutheran Seminary to the site of Picket's charge, to Little Round Top and the copse of trees, and then finally ending up in the Union cemetery. It had been raining and freezing every day before, and I was ready to see the battlefield through whipping winds and squinted eyes. But the day was sunny and very temperate for the time of year - about mid 40's. And because the leaves were all off the trees, we could see the battlefield vistas almost without obstruction. It was a perfect day. 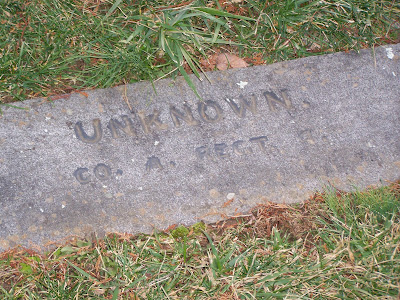 If you have never been, you should go. It is one of those places on earth that, as Lincoln noted, has been consecrated by the blood of the hundred thousand men who fought there. It felt holier than most churches I've been in. 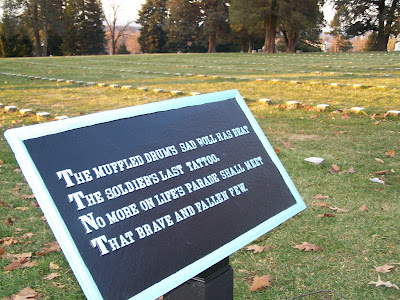 There are more than 10,000 Union graves here from those who died during the three day battle. All told, there were 50,000 casualties - dead and wounded between both sides. In the decades after the War, the Confederate bodies, hastily buried all over the field after the battle, were dug up through the efforts of a group of Southern women and interred at a cemetery outside of Richmond, VA. So the actual Gettysburg cemetery holds only Union dead. 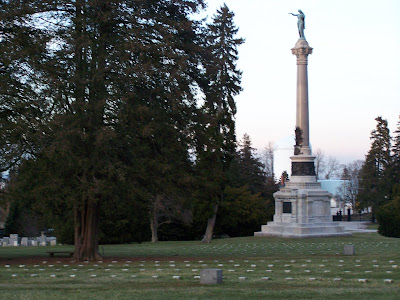 Just in case there are any other Gettysburg geeks out there (and, Lord knows, everyone SHOULD BE a Gettysburg geek!), and also so I have these images close at hand when I want to gaze at them, here is a photo journal of the battlefield. And because I am really, really geeky, the photos are in chronological order according to the action of the battle.

This is the guy who literally saved the day at Gettysburg - that is, in his actions on Day 1, he did much to help the Union win the three day battle, which victory perhaps also may have saved the Union.

Buford was a cavalry officer who got into Gettysburg first on July 1, 1863, ahead of the nearly 100,000 Union troops and just in time to intercept a small detachment of Confederate troops. Buford recognized the value of the high ground just south of the town and brilliantly dismounted and deployed his 2,000 horsemen, positioning them to hold off the Confederates long enough for General Reynolds to bring his infantry up in support. It was a gutsy, visionary, and courageous feat of generalship, and earned Buford an immortal place in American military history. 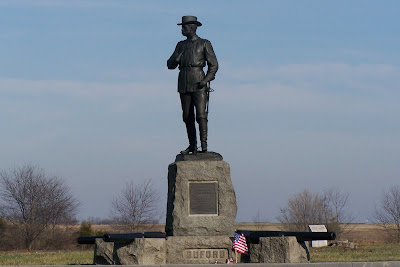 Buford's monument stands on the outskirts of Gettysburg, looking toward the west from which the Confederates under General Lee would make their assault for the next three days. 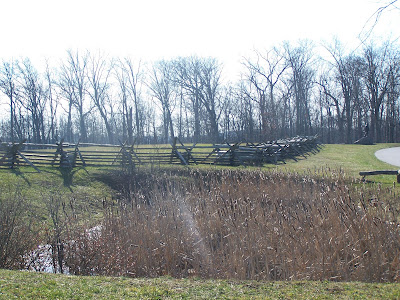 This is a shot of the ridge just west of Seminary hill upon which Buford's cavalrymen dug in. They held off ten times as many Confederates for a couple of hours. The fence line leads into the woods in which the famous black hatted, Minnesota Iron Brigades valiantly engaged the Confederates at great cost to both sides. 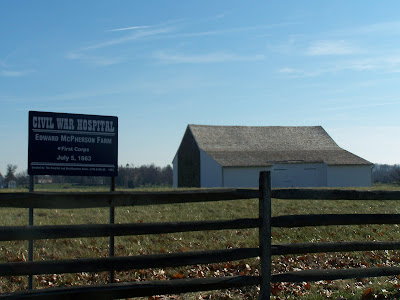 Just behind the fence above is McPherson's barn, the site of terrible fighting as the Union forces slowly withdrew during the day.

Here is a shot of a building that is one of the original battlefield structures still standing. During the battle, it was a ladies' school. Like most of the structures in the little town, it was a hospital by the end of the first day of fighting. This house stands right in the middle of the action of Day 1. 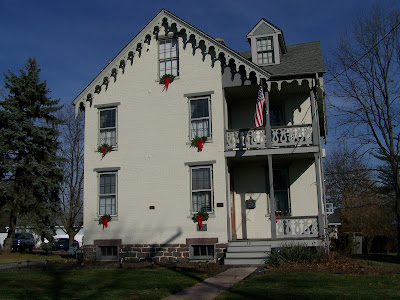 And to prove it, it even has a cannon ball still stuck in its facade, visible here as the little black spot. 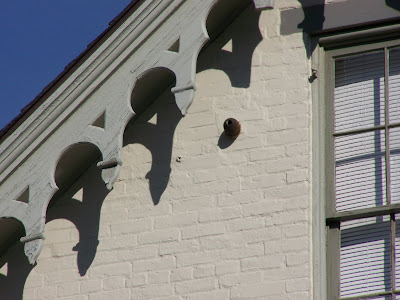 The most well-regarded and talented of the Union generals, John Reynolds was picked off by a sniper within fifteen minutes of arriving on the battlefield. It was a huge psychological and tactical loss to the Union and probably contributed to the disordered retreat of the Union forces at the end of Day 1. 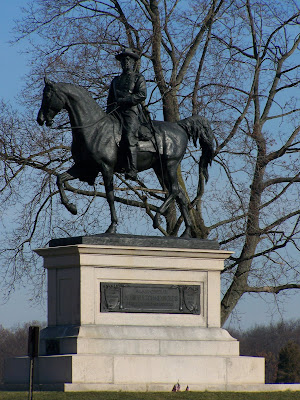 The Lutheran Seminary cupola from which Buford surveyed his troops during the action. 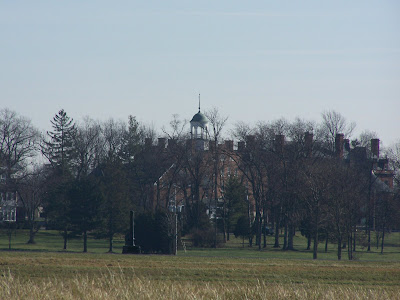 Two days later, it would be used by the Confederates particularly to survey the fateful Pickett/Pettigrew/Trimble Charge.

Okay, I have to do some paying work today so I will post photos of Day 2 hopefully tomorrow.