Frakking With My Brain

How did I miss this?! 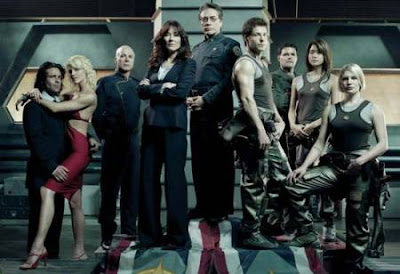 None of my friends and regular readers will believe this, but as of about two weeks ago, I am a total nerdy fan of the new Battlestar Galactica from the Sci-Fi Channel. (If anybody out there has Season 3 on any kind of format, I want to be your new best friend!) Why didn't anybody tell me about this show? It's the smartest dramatic writing I've seen on television in years - maybe ever. And by smart I mean the pacing is exciting - really daring sometimes, the stakes are high, the dialogue is great, the characters are multi-leveled and the themes are important. I discovered it by accident at Christmas with my sisters. (And all that matters now is, how do we get our hands on Season 3?!)

I choke this out as a life-long, confirmed despiser of all shows in which people have dogfights in space ships, wear vinyl clothing and do the ER style fast dialogue only about anti-matter hyper drives instead of IV pushes. I hate sci-fi. But I love this show.

What Exec Producer Ron Moore has done with Battlestar Galactica is craft a truly wonderful drama, that just happens to be set in, you know, spaceships and occasionally vinyl flight suits. The shows are all about the issues we are facing as a society today, although without the hallmark left-sided agenda that one normally expects. And it isn't transparently talking about today's issues. It just feels like the themes arise naturally out of the dilemmas faced by the last surviving 49,763 humans (or is it 48,765 today?) who are desperately fleeing across the universe trying to get away from their own creations - Cylons - who are out to kill them - and "have a plan" (sorry, I had to say it). I can't even figure out where the writers stand most of the time on particular issues because the writing is so balanced - although on the big universal questions, the show always gets it right. 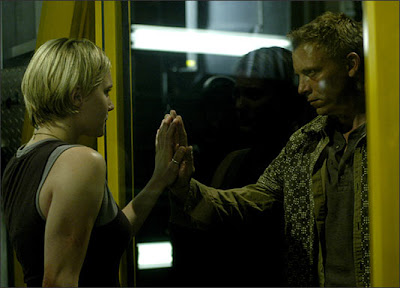 The background issue of the show - and probably what most sci-fi is about - is the problem of mankind losing control of his own tinkering with science. But the showrunners seem just as much preoccupied with the old Nuremburg trial question (and a perennial wartime question relevant today with all things Iraq War/Patriot Act/Quantanamo) of how far "I was just following orders" works as a ethical framework. It comes up nearly every other episode. As Dostovesky said, "The primary drive in human nature is to give over responsibility for our own lives." In many ways, BSG is all about that struggle.

And then, because the Cylons are essentially a terrorist network, there are all the issues of how tough is too tough when you are trying to save innocent people from terrorists. How far do you go before you become worse than your enemies? And then there is the whole problem of the humans had it coming for being so profligate. And then the Cylons find their strength in religious commitment. Other cool questions include, "Is it okay to steal an election from someone who you know is very, very bad?" and, "how much do civil liberties change in times of crisis?" and "Abortion is a luxury that a dying civilization can not afford." It's very concerned with the complexity of moral decisions -- no issue is pat or simple. (Which is very interesting to watch with the background of the Presidential Primaries in which every issue is over-simplified on the stump.) But I want to be clear that this show is not an anti-war screed. Anything but. 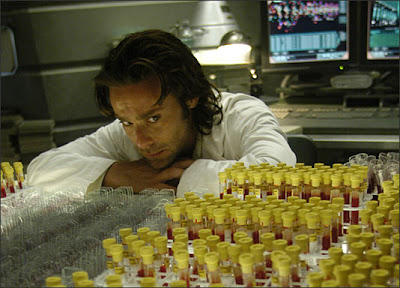 On the inter-personal level - because the characters are what really make the show - Battlestar is all about how love can make us heroic and then paralyzed, and how historic events can never be separated from the mystery of one on one human attractions and antipathies. The characters, while being extraordainary, aren't the stuff of plastic super heroes. They are all deeply flawed, but not in a cynical way. They make mistakes from exhaustion, because the burdens of their very hard life wears them down. Or because they are jealous or afraid. But then, they summon their best humanity again and die for each other. Very cool. But it would be hard to put a poster of this Starbuck (great portrayal by this new kid Katie Sackhoff!) or president Roslyn (where has Mary McConnell been hiding?!) on my wall. In the same way that one wouldn't put a poster of Pierre from War and Peace or Sebastian from Brideshead. (Oops, sorry Karen, did that reference just go over your head?) These are characters for grown ups.

Such smart writing. Really good acting. Surprisingly uncheesy special effects for a TV show (where the standard is now always going to be the cinema of George Lucas, this show holds up.)

A real gem if you haven't seen it. Especially with nothing entertaining on now during the strike. It's for adults. (Note: Season 1 had some over the top sexuality and every so often there was a moment of the same in Season 2. Also, some of the violence is very intense. We didn't watch the show around my eight year old nephew.) But frankly, the themes are over the heads of most kids. There is enough action to keep you following all the ponderous choices (and I mean ponderous in a good way), but this isn't Star Trek by any means. (Nor is it the first Battlestar series as my sister Alison has asserted. This is a whole other animal.) A real gem.

So say we all.