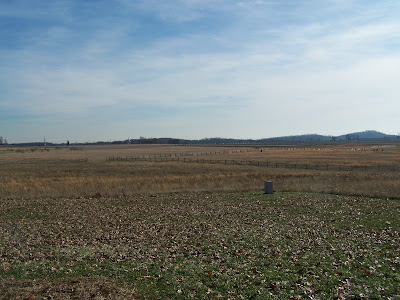 Here is a shot of what would be the Confederate perspective of Cemetery Ridge upon which the Union army had dug in on the evening of July 1st. The Confederates had ultimately prevailed on Day 1, driving the Union back into these hills, but now (the traitorous - sorry but that's how I feel - he should have been hung for violating his oath to the U.S. and causing the deaths of so many hundreds of thousands of men!) Gen. Lee awakens to the proposition of fighting on the offense by attacking the Union positions. (On Day 3, Lee would order his men to suicidally charge across this field in the culminating action of Gettysburg.) The situation on Day 2 was very much the reverse of the set up of Lee's blood-soaked victory at Fredericksburg a few months before in which the Confederates were dug in on a slope behind a stonewall. Lee's troops cut down the brave Union soldiers by the thousands until idiotic, blustery Gen. Burnside withdrew. Now, Lee is looking across this mile of field, at the Union dug in on a sloping hill behind a stone wall.

On the extreme left of the Union flank (seen here on the right) are the hills known as Big Round Top and Little Round Top. Both were thickly wooded, although Big Round Top is the more dense and steep of the two and nobody had time or means to get troops up there. The rear side of Little Round Top is almost sheer and inaccessible, but if Lee's troops could take Little Round Top on the front or southern face, the dug-in Union army would be flanked and then over run. (And then the Southern army can sweep right over to Washington, force the Union to surrender, end the American experiment, and keep their slaves for another thousand years.) As we say in the movie business, it was a high stakes situation.

Lee entrusts the action on the Union left to Gen. Longstreet. (There is another attack at the same time on the other Union flank on the Union right on Culp's hill -- but I don't have any pictures from that side of the battlefield.)

Here is Longstreet's perspective from the tree line just west of Cemetery Ridge of his objective, Little Round Top. The land in between was high with golden wheat on the day of the battle, and there was a peach orchard and then a patch of woods at the base of the Round Tops. 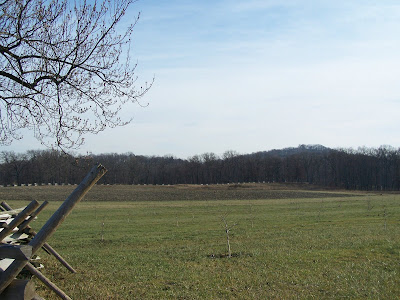 Here is the Union perspective looking back at Longstreet. In the top right hand corner of the photo is the monument to the Union General Warren. Very much like Gen. Buford on Day 1, Warren arrived on Little Round Top to scout the battlefield, and was horrified to note that the hill was unfortified. He realized immediately that if the Confederates got Little Round Top, the battle would be over. So, with the glint of Mississippi and Texas steel creeping through the woods just below, Gen. Warren hastened three regiments of Union troops into position on Little Round Top. They were there only a few minutes when the Rebels surged up the hill. 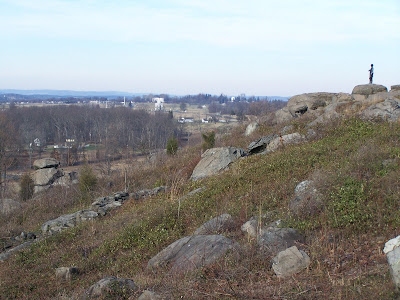 Here is the detail of Gen. Warren's monument. 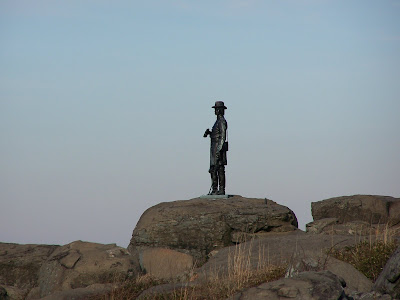 The Union almost lost the Day because of the actions of the weird, glory-seeking numbskull General Sickles. For no discernible reason, on the morning of Day 2, Sickles disobeyed orders and led his troops off of his dug-in position on the left side of Cemetery Ridge, and pushed forward across the wheat field to attack the approaching Confederates. Thousand and thousands of men died because of this fool-hardy action, although Sickles managed to get a Medal of Honor for losing his leg in the fighting.

Here is the site of the Peach Orchard. Our guide told us that the peach trees had all gotten some kind of parasite, so the National Park Service had them dug up and the soil treated. There will be new peach trees planted next year so that this part of the battlefield will be restored to it's original look. 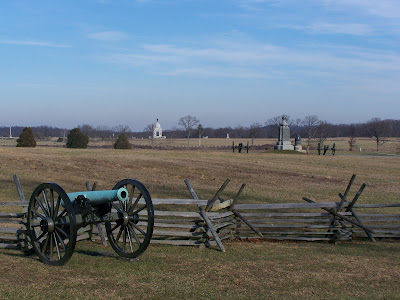 After changing hands six times and heavy losses on both sides, the Union forces of Gen. Sickle retreated across this wheatfield. 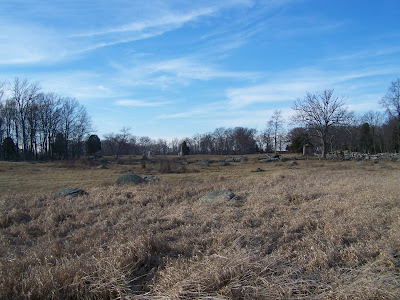 From the top of Little Round Top, this is a perspective of the battlefield called "the slaughter pen" because of all the men who died there. Over the course of Day 2, Rebel snipers in the woods and rocks shown here picked off scores of Union officers. 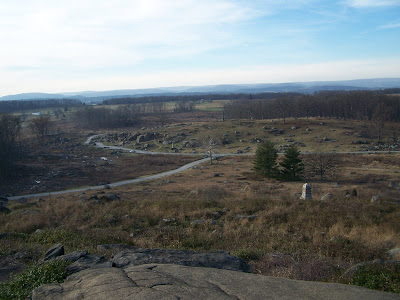 Front view of Little Round Top. I can't remember whose monument this is. Somebody heroic. 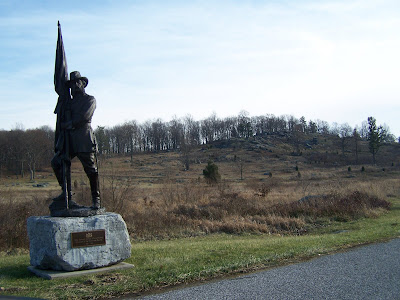 I can't believe I didn't take any pictures of Devil's Den. I do remember that it was much smaller than I expected considering the hundreds of men who fought and died in that part of the battlefield just southwest of the Round Tops. Guess I'll have to go back to get some pictures.

Here is the slope of Little Round Top looking slightly southwest. After prevailing in the peach orchard, the wheat field and Devil's Den, the Confederates charged up this hill over and over until the bodies covered the ground. 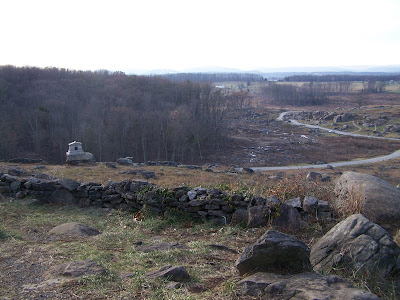 After unsuccessfully charging up the front of Little Round Top many times and sustaining heavy losses, the Rebels tried to cut through the little valley between Little Round Top and Big Round Top assaulting Little Round Top from the side. Here they were met by about two hundred stalwart New England farmers and fisherman - the 20th Maine. 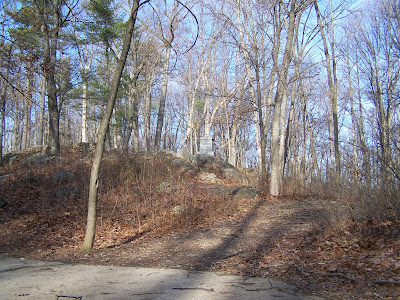 Led by a former rhetoric and religion professor, Col. Joshua Chamberlain, the 20th Maine were veterans of many battles and had seen their numbers dwindle from nearly a thousand. The Maine was formed up in a near right angle to the other Union troops on the front of the hill with the steep impassible back slope of Little Round Top to their left and behind them. Here is the perspective of the 20th Maine looking down on the charging Rebels. 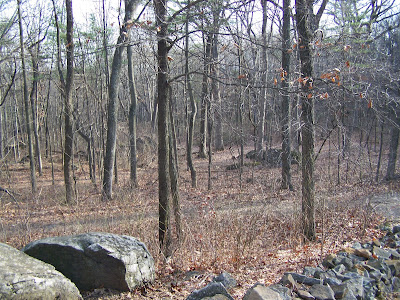 In the end, the Union would run out of bullets, and in a dashing and astounding feat of soldiering, Col. Chamberlain had his men fix bayonnets and charge into the oncoming Confederates. The Rebels were so shocked at the charge that nearly 600 of them surrendered and the rest ran back down the hill in terror. The charge of the 20th Maine ended the attacks on Little Round Top and subsequently the action of Day 2, and won Col. Chamberlain the Congressional Medal of Honor.

Here is the monument to the men of the 20th Maine. 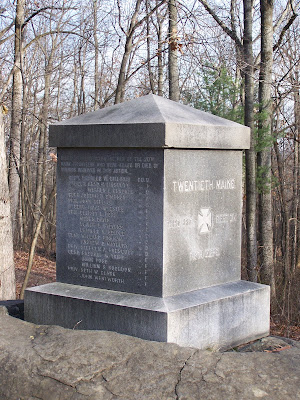