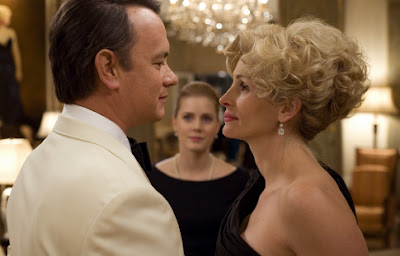 Compared to Sorkin's brilliant The American President, this is a piece of sloppy crap. It doesn't have Sorkin's wit. It doesn't have good characters, it doesn't have a particular theme or internal struggle for the leads. There was a palpable ambivalence reflected in Sorkin's writing - probably because as a liberal he isn't real sure defeating the communists in Afghanistan was really worth it. And also, because the heroine of the piece is a (oooh grosss!) Christian from (eeeeeeeew!) Texas. Just in case you didn't know it already, Sorkin makes it clear in several places in the film that Christians are stupid, lame, hypocritical, and intolerant. At one point I turned to my friend and said, "Good God Aaron, would you just frakking leave us alone?" I never, ever understand how this crowd which so prides itself on tolerance has no filter against this kind of religious bigotry.

Anyway, the movie has lots of problems, but one of the main ones is that it assumes that because the lovable Tom Hanks is the lead, there is no need to do the usual work of establishing sympathy for the character. So, we meet the lead character, a thin-haired, chubby, aging baby-boomer, doing cocaine and shots in a hot tub with three naked hookers, and we're supposed to think it is charming because, you know, it's Tom. (Yeah. How's that working out for you, audience? No, huh?) The audience never gets over it and Tom's character never becomes someone we like or trust. And then the fact that Sorkin doesn't bother to give Charlie a real arc just compounds the problem. Charlie converts to the Afghan cause before the mid-point of the movie and then has nothing left to learn.

My main pique with the project was the way it studiously avoided giving Republicans or Ronald Reagan - who was president at the time of the events of the movie - any credit AT ALL for any of the efforts made to defeat the Soviets in Afghanistan. It is as though Reagan wasn't even there in Washington. Which made me really mad because it is just so damn unfair. I hate unfair. Unfair is the dragon temptation of people who are offered the golden key of media power. (I pray we believers always keep in mind that manipulation and deception is always wrong, even in the name of a really really good cause.)

Philip Seymour Hoffman created a cool character, but he really doesn't have much to do besides toss out sarcastic lines.

Despite the high production and star quality in Charlie Wilson's War I found this movie dumb and a waste of my time. And my much more mellow, Democratic friend who was with me agreed.