So, as I noted below, through many machinations and an abundance of natural grace, I did get a hold of all but two episodes of Season 3. (The two episodes I haven’t seen are nos. 6 and 7, but I have read the episode recaps enough to catch up on the substance of the stories.) And several folks have asked me what I thought of it. Well, brace yourself. You asked...

Several people had warned me that Season 3 wasn’t as good as the first two, and I admit that the first time I watched it, I tended to agree. In a second screening, I’m not so sure. Clearly, Season 3 is different from the first two. It wasn’t as filled with intrigue and I was often disappointed with what happened to some of the characters, namely the whole Kara and Lee sub-plot…which it seems to me now, on a second viewing is actually the essential plot, and that I was just wanting it to be Cinderella and soap-operaish, and the show is so much better than that. More about that below.

Having said that, I think that much of Season 3 was brilliant. And the last three episodes were really, really brilliant. But yes, there were a few episodes that felt more like a conventional episodic situation drama, that didn't add a lot to the A-story of the series. (Most egregious of these was the whole "Tyrol as Labor Leader - Dirty Hands" episode. Good thing they didn't do that a lot.) 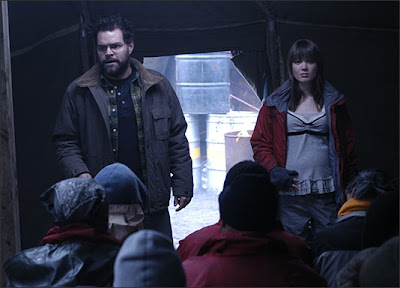 Life as an Occupied People – A lot of people wrote me that they thought the time spent on New Caprica was overdone. I thought it was fascinating. But then, I am always wanting to stare at what makes some people in extreme situations heroic, and what makes others collaborators with their oppressors. Watching our beloved characters fight over the use and abuse of suicide bombing was fabulously uncomfortable.

The only part of the Occupation story lines that I found disappointing was the whole Kara with Leoben thing. It was never clear to me exactly what Leoben wanted from her. And I wanted to see her break psychologically much more completely than just having her heart warm to the cute little girl. I wanted to see Kara being driven to really betray herself/humanity with Leoben, or at least almost do it, in such a way that she would leave New Caprica with absolutely no idea of who she is anymore. The show hinted at this, but seemed to run out of time and didn’t quite get there. 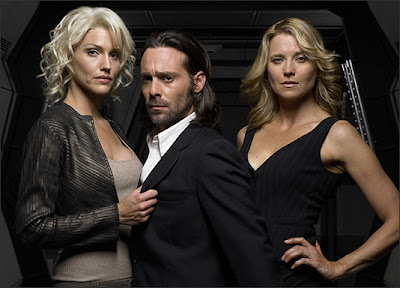 Life in Cylon World – I found most of the glimpses of Cylon life aboard the base ships to be deeply unsatisfying and lacking in imagination. The sterile sets and Cylons walking purposefully down neon-lighted hallways reminded me of low-production value of the original Star Trek episodes. It seemed to me that there needed to be more thought put into exactly what computerized robots would do on a base star. A more interesting vision would be, well, they do nothing. They sit, plugged in, and stare. They have no need to walk around, eat or sleep when they aren’t with humans, so they would all be immobile, like laptops sitting on a desk. (This would render opportunities for human interaction either highly entertaining or highly annoying for the Cylons.) I thought the half-submerged hybrid to be a problem because it seemed to me that the whole problem of the show was their effort to conceive human/cylon hybrids. If they’ve already done it, then why all the fuss? (I feel sure I missed something here and one of you more geeky than I can fill me in.) 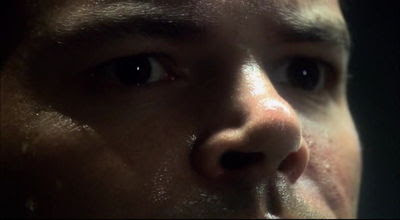 Four of the Final Five - I have to admit, I loved how the show did the gradual reveal of four of our heroes as Cylons. The music thing was just so smart, and opens the doors to so many other possibilities of the whole gang on Galactic being played despite themselves. But I can’t say I believe that Tyrol and Tigh are Cylons. Tigh was involved in the first Cylon war, so he predates the decades in which Cylons retreated and developed skin-job technology. And Tyrol, as the father of a son, can’t be a Cylon without completely diminishing the whole huge build-up of Hera as the all-important Human-Cybrid offspring. And honestly, until the show tells me what the profound difference between skin-jobs and humans is, I can’t be that horrified about finding out the names of skin-jobs. If there ain’t anything radically different about human life and Cylon life, than why should I care who ends up being a Cylon? (ref. My earlier post about this flaw in the show.) 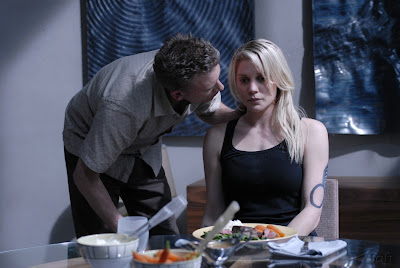 Kara and Lee - Kara Thrace’s character (so beautifully realized by actress Katee Sackhoff) is the fan’s favorite, and mine, and I think it's because on several levels she is so emblematic of a whole generation, or two, of us who were raised during the Sexual Revolution. I have met a lot of Kara Thrace’s in my life (sometimes in the mirror – although I tend to be more Lee-ish, the other "holding it together/responsible" part of the generation that has to share classrooms, offices and homes with the Kara’s) and have found them thoroughly devastating and also always compelling. They elicit so much tenderness, and then revulsion and rage – which are the same cycle of emotions that poor Lee has had to go through being on the periphery of “Kara Thrace and Her Special Destiny.”

I don’t want to belabor it, but most of us who were raised in the late 1960-s through the 1980’s had a mother who wasn’t sure who she wanted to be. She wasn’t sure whether being a mother was going to be enough for her. And that ambivalence resulted in children who spent their lives yearning for unconditional love, but then throwing it away whenever it presents itself because of a deep-seated sense of unworthiness. It’s particularly acute in women because the struggle that our mothers played out sets us as women against our own nature. (Don’t have time here to go into that more, but I think it is the key story of the post-Sexual Revolution mess.)

Now, as I see it, God has to intervene to save Kara so that she can save humanity. Part of that saving of Kara has had to be cutting her off – “like a cancer” – from everyone else whom she might use as a crutch. Kara’s “death”/baptism in Maelstrom was so insightful and perfectly mysterious that I almost couldn’t believe I was watching it on television. Kara can’t be a Cylon, because then the ofering of her life wouldn’t have any meaning, because, um, Cylons don’t die. (And also, they gave us a two-second shot of her hand hovering over the eject lever! Good grief, que obvious!) 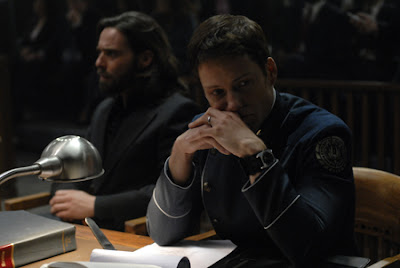 Lee is also broken in Season 3, primarily by Kara’s death. Lee’s life without Kara has no meaning and everything he was falls away, in the ultimate coming of age journey. Now that he is in a real sense, his own man, he can either become a saint or a demon. The end of Season 3 leaves him approaching the demonic.

In watching his gradual corruption in the last three episodes, I think I finally understood why people watch NASCAR. What might happen is so potentially terrible, that you just can’t look away. The corruption culminates in his awful testimony on the stand in which he asserts an “immoral equivalency” to everyone’s choices since the start of the Cylon Wars. He becomes the guy who says that the Marines who shot civilian Iraqis in a raid, are the same as the 21 demons who crashed airplanes into buildings on 9/11.
I know I am belaboring an obvious bunch of connections, but I have to say it. Lee’s other name is Apollo. Apollo is the God of the Sun, the Lightbearer. In the scene in which he resigns his commission, the beloved son of Admiral Adama looks his father in the face and says, “I will not serve….” Lucifer, was the most-powerful of the Angels. His name literally means “Light bearer.” Tradition has it that Lucifer’s response to the vision of the incarnation and redemption of mankind was, from the Latin, “Non serviam” which means, um, “I will not serve.” I expect Lee to become much darker in Season 4 -- unless his character's spiral is somehow truncated by Kara's resurrection....but dramatically, I would hate that. Kara and Lee have to be enemies now, as Lee has lost his purity, just as Kara seems to have found hers.

My guess is that after saving all of humanity, it will be the last part of “Kara Thrace’s Special Destiny” for Kara to save Lee. Which would be just, because he did sustain her and hold her up so many times, saving her for her ultimate destiny. But I wouldn’t place bets on it either, because BSG justice is just never that simple.