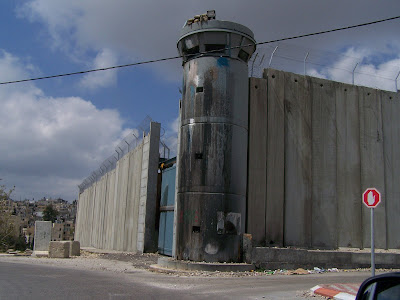 The security wall. It's awful. Much more massive than I had imagined, and utterly without any relieving factors that would make it look less like, well, the walls around a prison camp.

It's covered in graffiti on the Palestinian side, much of which is in English - which struck me as odd. The most impressive graffiti I saw read, "Mr. President, Tear down this wall!" 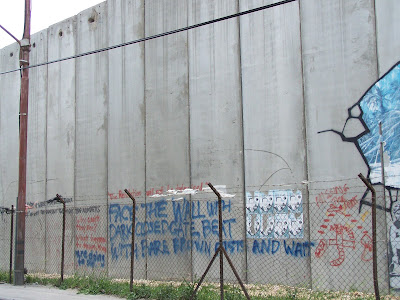 It has temporarily stopped the bombings. But it is the source of such ominous simmering rage in the Palestinians, that it seems to me that it will cause an even greater outbreak of violence at some point.

People kept saying that the Wall should naturally become the border in the eventual negotiated two state settlement that will fix everything and bring peace to the region.

My feeling is that the two state solution is a pipe dream. It is impossible to realize because the Muslims are ubiquitous throughout the whole region. Except for a few places around Tel Aviv, the whole land west of the Jordan to the Mediterranean is filled with Muslims (and Christians...but they are almost a non-factor in their current numbers). Nazareth, for example, is west of the Sea of Galilee. It is 80% Muslim. What are you going to do, just expect the 80,000 Muslims who have lived there for a thousand years to up and move to the other side of the wall? It's just not going to happen.

The thing that should happen to bring peace is that the Muslims should grow up and accept that the Israelis are the best thing to have happened to the region. The Israelis are really good at governing when they aren't having to be warding off suicide bombers. They bring order, prosperity, modernity. The Palestinians seem completely inadequate to the task of governing. They don't build half as well as they destroy.

(I snapped this shot from one hillside. It seems to me to be a testament to Palestinian self-rule. Just over the hill a piece, the Israelis have pioneered amazingly 21st century methods in agriculture and food production. But here is a Palestinian farmer, using a wood plow and a donkey, pretty much exactly the way it was done 2000 years ago. It's more than poverty, folks. It is a rejection of modernity.) 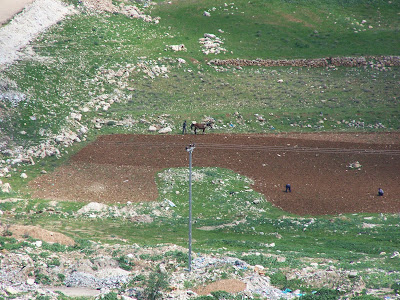 But the Muslims aren't going to accept life under the Israeli flag because their religion has no provision for anythng but dominance by Islam.

So, the answer to peace in the region is to abolish both States of Israel and Palestine. And then you create one new state - call it the Holy Land - in which the rights of minorities are protected. And then you have elections and the Muslims win most of the seats because they are the majority.

This is the only realistic solution. But it will never happen. Because of the Holocaust. We visited the Holocaust museum in Jerusalem and it is life-changingly powerful. After their European neighbors had sold them to the Nazis and watched them get herded away in box cars, it would have been impossible for the Jews to go back to their homes in Europe. They had to go somewhere. But it wasn't right to move in on Palestine and just declare it Israel. So that injustice continues to cause unrest, and it won't stop until it is corrected. Which will probably be never. Because of the Holocaust.

Anyway, back to Bethlehem...

Bethlehem is a thirty minute drive from Jerusalem on the other side of the security wall. It is pretty much completely Arab and under the administration of the Palestinian Authority. So, we heard tales of widespread corruption and extortion, and saw blocks and blocks of abandoned buildings and garbage dumped everywhere in the streets and empty lots.

This lot filled with garbage is just down the hill from the Church of the Nativity. 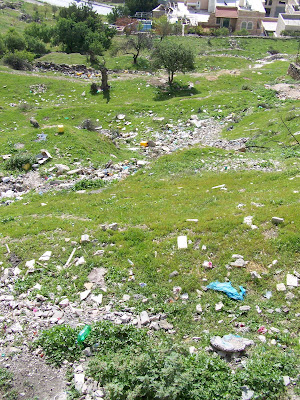 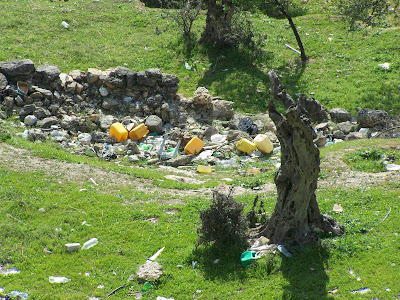 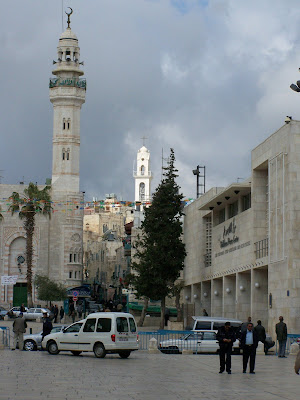 Here's a shot of part of Bethlehem from the nicest spot in the whole area, the Shepherd's Field. 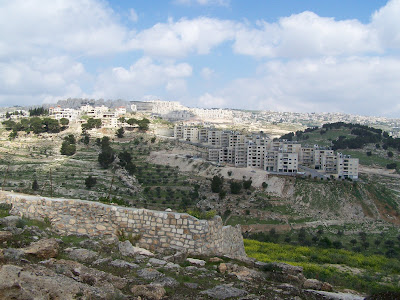 Here's the Crusader's Cross (in neon!) directly across from the mosque, over a Franciscan residence beside the Church. Every major site in the environs of Jerusalem is tainted with this kind of "We're Here! So There!" kind of spirit. 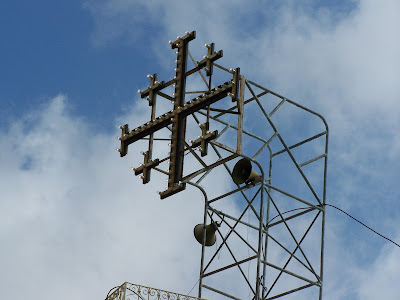 Here is the entrance to the Church of the Nativity. The door was made little in medieval times so that people wouldn't ride their horses and camels into the church. 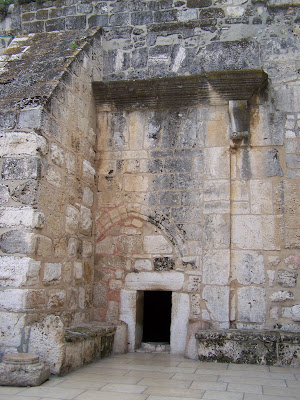 The Church is maintained by some kind of Orthodox group, and most of it has been burned out and whitewashed at some point in the Middle Ages. Up in front, there are all kinds of (gaudy? that's my Roman bias, I guess?) lamps and icons. Which makes for an interesting survey, but a lot of them were so darkened by years of smoke that they just looked like black shadows in gold frames. 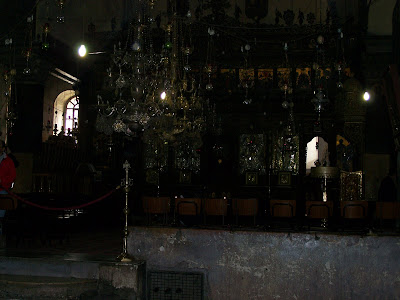 Under the Catholic half of the Church of the Nativity, they have excavated the cave where St. Jerome lived and worked... 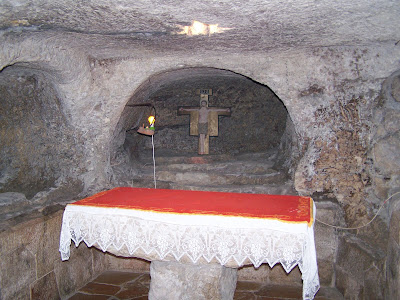 And have found his grave. 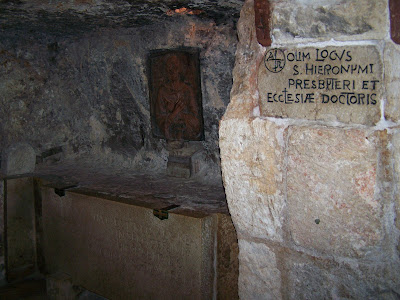 A beautiful must-see in Bethlehem is the Franciscan maintained site that for centuries has been venerated at "The Shepherd's Field." This would be the site in which the heavens opened and angels proclaimed the news of the Incarnation to the shepherds who were watching their flocks. 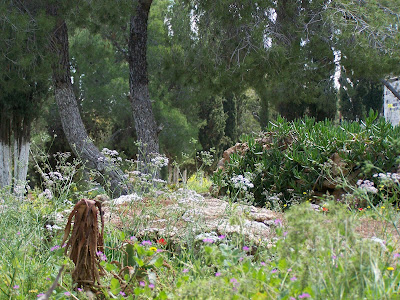 Archologists have excavated there a first century cave of the type used by shepherds, as well as a Christian Church and monastery that was built on the site fourteen hundred years ago, indicating that the location had been established at that point as being a place of significance. 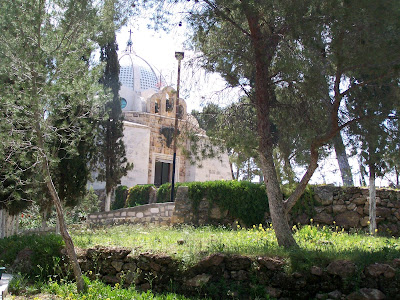 The Franciscans have built outdoor Chapels all over the grounds so that visiting groups can offer the Mass. It's very peaceful and holy feeling there.

Here is the small but impressive main church on the site which was the last building built by an architect whom our guide told us was very famous, but whose name I can't remember (because he never made a movie?). 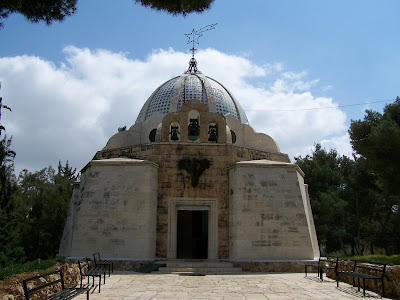 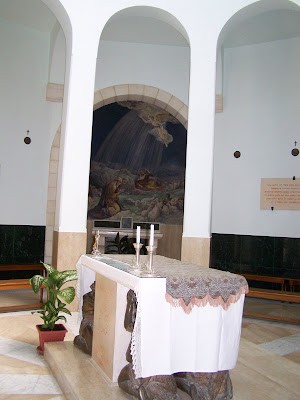 There is a line of angels like this all around the inside of the chapel ceiling. 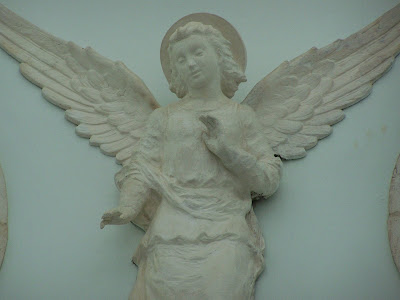 I walked all over the site which really kind of emits the presence of angels, and prayed for my city, the city of the angels. (How do pagans deal with the fact that Los Angeles, a city dedicated to the angels - God's messengers - became the global center of world media?) 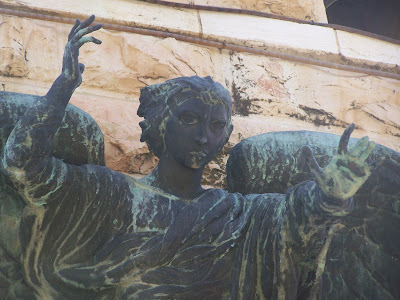