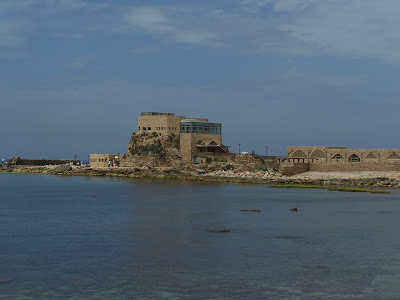 I missed the day trip to the site of Jesus' question "Who do you say that I am?" because I opted to spend the afternoon reading the Gospel by the shore of the Sea of Galilee. Some times you have to make tough choices.

The pictures that follow here are from another city named Caesarea, which was built on the Mediterranean by Herod the Great to be one of his play palaces. It included swimming pools and a chariot racing stadium and a amphitheater that would seat Herod and about 4000 of his closest friends...or, for Herod, 4000 people who were the most terrified of him to not show up when he staged a play.

From a Christian standpoint, the only significance of the place is that St. Paul was imprisoned here for a year before he was sent off to appear before the Emporer in Rome. It's a lovely seaside place even today when it is mostly just ruins. I was glad that St. Paul was in a place where he could at least hear the sea and hopefully feel a cool breeze every so often. If you have to be in prison, might as well be in a resort town.

The amphitheatre has been restored pretty close to its original glory. Behind the stage, the Mediterranean makes a stunning backdrop for the audience. Can't ever fault Herod for his architectural taste. 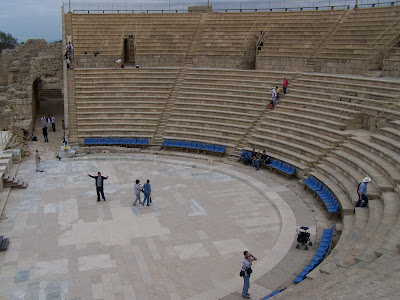 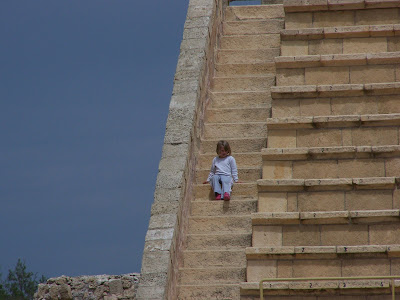 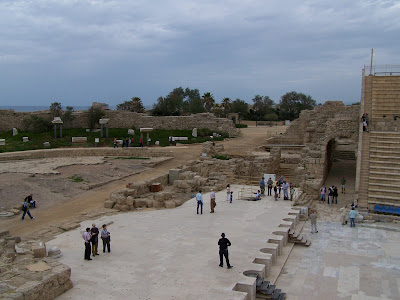 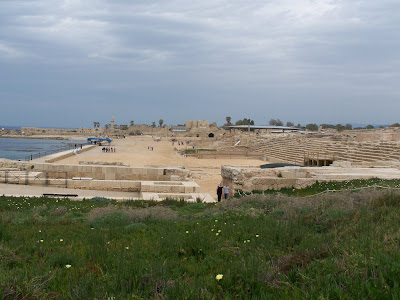 The remains of Herod's palace. 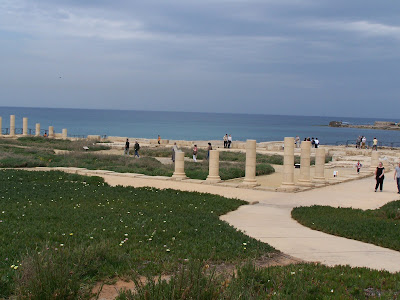 We ate at a restaurant that is very typical in Israel for not having any meat. That's because it had cheese in some of the salads. It's not kosher to have restaurants that serve both meat and cheese, so you can either eat pizzas or hamburgers, but rarely both in the same restaurant. Here are friends Rob and Cindy in said kosher restaurant, one of the loveliest spots I have ever eaten an artichoke pizza - with cheese. The Mediterranean is just outside the frame off to Cindy's left. 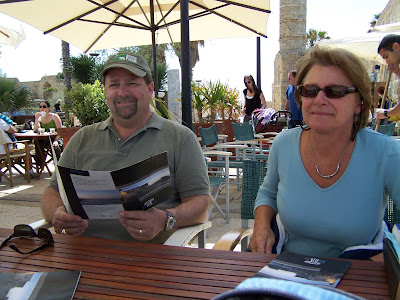 We also had the coolest most-refreshing drink I have ever had in this place. It is a Minty Lemonaide, in which they blended up lemons and mint. Delicious. Really memorable. 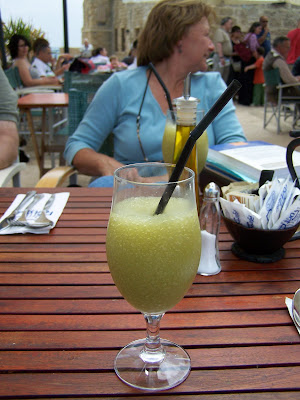 St. Paul also said: unless you work you will not eat. It's a wonderful thing, if you've found a way to explore our heritage, eat good food and work! What a blessing to you. Thanks for the pictures, people think the Bible is not about history, and it is!

The area is called Caesarea Phillippi becace the area was under the control of Caesar Phillip. Caesarea Phillippi was first called Balinas after the pagan god baal(story of Elijah), even to this day some people refer to the are as Banias.