An Open Letter About Being A "One-Issue Voter"

I just sent this message off in an email to yet another of the annoying useful idiots who define themselves as Christians supporting Barack Obama and have felt the need to try and rally me to the cause of supporting the man.

In the name of missing a chance to take a stand on the slavery of our day.....

I have received your heartfelt appeal for me to consider voting for Barack Obama. As a Christian, I find your message way beyond galling, and into the realm of the surreal.

I can not, under any circumstances, ever support a candidate who thinks it is okay for a baby human to be chemically poisoned in its mother womb.

That is, nothing could ever prevail upon me to vote for a man who vehemently argued it was not a moral problem to have a late term child, delivered intentionally in breach, so that it's head could be punctured with scissors and then have it's brain sucked out so that it's skull could be readily collapsed.

In other words, there is no possible scenario, under which I would vote for a man who shrugged that the separation of the humanity of unborn humans from their rights as persons was ABOVE HIS PAY GRADE!!!!! It is particularly mind-numbing that such a blithe dismissal comes from a man of color, whose own personhood was voided only a short hundred and fifty years ago by the same Supreme Court that has arbitrated this the greatest social evil of our lifetime.

It is proof of the complete triumph of the civil rights movement that the group that was once oppressed now gets to declare another group subhuman so as to nullify their civil rights.

But let's be clear for the record, shall we? Not once, in the history of the human race - NOT ONCE! - has a group of humans separated another group from their rights as persons, and been right. NOT ONCE! In fact, the people who voided other's personhood - the others being Jews, women, Native Americans, blacks - have all been judged by history as being among humanity's most vile and evil of groups. So why the hell do you think this time will be any different? It's the EVIL, stupid! 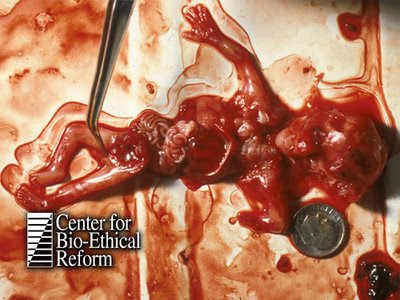 I guess it takes an intellectual of Obama's stature to render the above image obscure and subject to debate. Above your pay grade to say what that is, IS IT?! Above your pay grade??!!! A flipping five year old can tell you what that is, you gutless hypocrite. It's a little dead person.... Looking out for the little guy, huh, Obama? Gonna take care of the poor? It's not quite going to be UNIVERSAL health care is it, Senator?

Don't kid yourself. Abortion ain't just one more issue on the horizon anymore than slavery was in the 19th Century, or anti-Semitism in Germany in the 1930's. There were certainly other issues in 1858. There were economic problems and international disputes - but the truth is, today, we remember none of those other issues. Slavery was the DEFINING issue in the same way that abortion is today because the failure of a person to have a gut-wrenching horror over both slavery and abortion, reveals everything about the quality, insight and wisdom of that individual. Myself, I am not going to see my name on the rolls of history's dupes alongside the slavery question's Steven Douglas who found a political rationalization to support keeping black people as slaves. He was wrong then. You and your ridiculous Obama are wrong today.

So please, stop trying to convince me that your guy is great. He isn't! And don't you effing dare try and convince yourself that Jesus is somehow indifferent to your lukewarmness about abortion or that the war in Iraq somehow balances out the Democrat party's obsession with abortion rights. Don't you dare try and duck the ramifications of your vote in this matter. You must own the screams of the unborn echoing back to heaven in the way that the German people had to own the stench of the burning flesh of the death camps. Own it. Because you are a useful idiot for the demon of this age.

May God help us.