Crikey, mate! What a total mess! 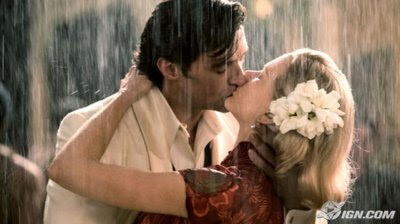 I remember when I was in Australia last year that somebody explained to me the local euphemism in which something very nice is called a "dinky di." Well, let's just say the new movie Australia by director Baz Luhrmann needs a whole new euphemism, maybe, "dinky doo-doo"?

It is a spectacular mess. That is, it is lots of spectacle but all strung together in a very messy way. so much of the movie comes across like a travelogue, only of the most ugly, unsightly parts of Australia. The exceptions of course are the two gorgeous leads, Nicole "Can Her Eyes Be Any Bluer" Kidman and Hugh "Any Excuse To Remove the Shirt is Fine" Jackman. They look lovely here. Too bad what they have to do is act ridiculous.

I felt very often in the 2 hour and 55 minute long project that I was watching a kind of cartoon. It was over-the-top, but we've come to expect that from Luhrmann, but generally it's okay because it is the service of a larger, universal theme. Here, the theme seems to be a weird politically correct apology for white Australians, and a highly romanticized depiction of all things aboriginal - except the aboriginal women, who were all horribly unattractive. Along with the over-the-topness, the period establishing shots of 1939 Darwin, Australia were badly executed paintings that looked like they had been bought in a hotel lobby art sale.

Australia is too cute. Too long. Too sentimental. Too episodic. Too melodramatic. The score too loud and swelling. The acting too theatrical. The script just too, well, um, shitty.

But no worries. If you haven't seen it, you have been warned. G'day.