"Transition advisers to President-elect Barack Obama have compiled a list of about 200 Bush administration actions and executive orders that could be swiftly undone to reverse White House policies on climate change, stem cell research, reproductive rights and other issues, according to congressional Democrats, campaign aides and experts working with the transition team." 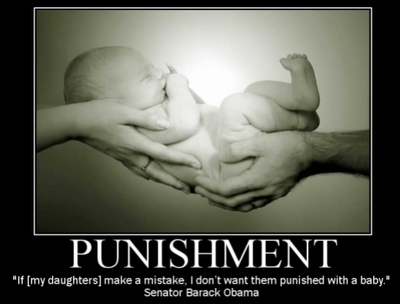 Hmmmmm..... Please one of you Christians for Obama, please help me out here with one of your swift and tortured rationalizations about how an Obama presidency won't mean more abortions. Because, two of Obama's three FIRST ACTIONS AS PRESIDENT seem to be all about killing the Jews. Oh no, excuse me, I meant oppressing the slaves. Oh! What is wrong with me today? I meant, of course, killing the little inconvenient humans in the womb.

It's stunningly terrifying how killing little people ISN'T above Obama's paygrade, heh? A wise man ("a philosopher king") would hesitate before taking any action that might end up in the death of other people.


But I want to say a word to my Catholic Obama-supporting readers. I have to ask the indulgence of my non-Catholic readers here while I take a rare moment to address my own who frolic on the Fullness of Truth side of the Tiber.

The question is, was it over-stepping of me to suggest that a Catholic voting for Obama was a sin? Okay, well, with St. Thomas, I will grant you that hopelessly stupid Catholics could possibly be exempted from the pain of sin here. Also, a case could be made that Catholics who are invincibly ignorant (that is really, really clueless through no choice of their own and completely unaware of the gifts available to them to inform their consciences through the compassionate light of the Holy Spirit as it speaks through the teaching authority of the Church) could also escape responsibility in this matter. So, if you, Catholic for Obama are either of these, hopelessly stupid or invincibly ignorant, you would possibly not be flirting with grievously sinful behavior by voting for Obama, and I would feel compelled to apologize to you for suggesting it. Of course, you would then probably also be too stupid or ignorant to understand my apology, but hey, that would be a matter, say, above my pay grade to correct.

But, if you are not hopelessly stupid, or invincibly ignorant, you are in spiritual trouble. Big trouble. Because you aren't like the Protestants in this matter. Through the choices of their ancestors centuries ago, the Protestants have grown up basically on their own in sorting through questions of faith and morals. They are over their heads in this because it isn't a fair fight between silly human brains up against "not flesh and blood, but principalities and powers." But when millions of them get stuff wrong, like whether it is okay to support a politician who wants to unjustly screw Native Americans out of their property, or who, like Obama, want scientists to suck the brain stems out of unborn humans, the Protestants will not be fully culpable for their errors in judgment.

But you, Ted Kennedy - Pelosi - John Kerry - Joe Biden, you are another matter.

In choosing to empower Obama with your vote, you have acted in flagrant, willful disobedience to the Magisterial voice of the Church, YOUR Church. The Holy Spirit set up that Magisterium for exactly such a time as this: a time when a handsome, hip, articulate and compelling leader comes forth who would confuse your screwed up little nature by the disconnect between his bearing and his message. You really want to vote for him because he moves your emotions. But the things he says makes your intellect disturbed. But then your commitment to WHO YOU ARE as a Catholic should step in and say, "I don't know what to do here. What does the Church say?" And the Church says, "When you vote to empower someone who advocates something that is objectively immoral, you share in the responsibility for what they will do with that power." And then you, acknowledging your puny, overwhelmedness against the conflict between your emotions and your reason, would submit yourself humbly in faith to the Holy Spirit as He speaks through the system He set up. And then you couldn't vote for the Planned Parenthood candidate.

In this case, Catholic-for-Obama, WHO YOU ARE as a Catholic took a back seat to WHAT YOU WANT as effectively your own deity/magisterium. We're right back in the Garden with this as the words of the snake echo down through the centuries, "But YOU shall be like God, deciding what is good and evil..." You are suddenly just like the Catholic who voted for Hitler because he made your heart beat with pride through his speeches, even though you felt a bit queasy about those harsh things he said about "the Jew." But you really, really wanted Hitler because he promised to fix Germany's economy and global standing. So you talked yourself into a posture that the Church should just stay out of things like the bedroom or the hospital or the, you know, racial ghetto they're building on the edge of town. REALLY! Have you never ever wondered how it happened that so many good Christians supported the Third Reich? THIS IS HOW IT HAPPENS! 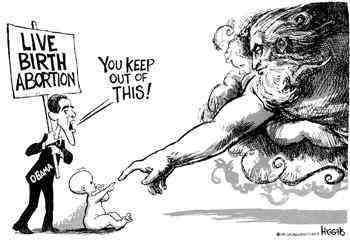 So, the Protestants, who, flailing around helplessly on their own, talked their consciences into supporting Obama, will get into heaven before you. Their sin is foolishness and some level of willed ignorance. Yours, is disobedience and arrogance. A much more serious matter.

If you really couldn't see your way to supporting McCain as a perceived "lesser of two evils," than you should have voted for a third party candidate. Because, as St. Thomas says, if you act when your conscience is conflicted about whether a matter is sinful, than you are willing yourself to possibly commit a grave sin. And we don't get to do that. (Try now and dismiss everything I have said for "judging you." It is your privilege to dismiss me the way you have dismissed the Magisterium of the Church. But maybe, you would be dismissing a prophetic voice that has been sent to you. Yeah...... "See, they murder and stone the prophets.")