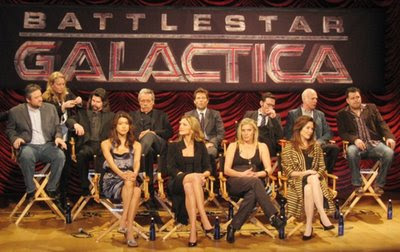 Okay, back to what's REALLY important....

The IMDB page for the much anticipated last ten episodes of the great Battlestar Galactica (2003) (all bow) is listing a "freaking me out!" casting addition.

If you don't want a potentially mind-blowing spoiler of who just might be the Final Cylon, then, by all means, don't click here.

Now, I own that I had thought of this a while back, but dismissed it as being dumb from a story/character standpoint. And the words "dumb" and BSG don't often end up in the same sentence. (Unless that sentence is, "Why is the global audience so DUMB as to not be insanely obsessed with the wonder of BSG?!?")

My feeling is, making this character "the one" is way too cute. And also left-fieldish.

But it sure will make Kara's life (whatever that means since Season 3) much more complicated...