Being on the Wrong Side of History, II

"You see, those people in there,
they're not really people at all."

(from The Boy in the Striped Pajamas)

Not surprisingly, I have gotten many emails in reaction to my post about the election of the man I principally think of as Barack Obortion. I'm going to reprint a few of them here and then add some more kindling comments to the fire.

Barbara, Although we’ve never met, I just wanted to tell you how much your words mean to me. I live in Canada but we are directly affected in so many ways with what happens in the US. As the saying goes, when the US sneezes, we catch cold. I became a Catholic just a couple of years ago and for that I thank God. I would have never had the spiritual strength to even attempt to stand up against this unmitigated evil that could well be foisted on North America. It reminds me of the line from No Country for Old Men…”it’s the tide, the dismal tide.” I can’t believe the gullibility of people, especially those who call themselves Christian. It makes me want to weep and it makes me want to scream. St. Michael the Archangel, defend us in battle.

Thank you for your bold statement! I am a German screenwriter and director, and your words cut into my heart, because I know what it means to live on soil that is still drenched with the blood of God's people. We Germans are the way we are. because of the things we try (hard) not to remember, and still, we cannot escape them. There is no innocence, no end to responsibility, no cover-up through the shifting sands of history. The holocaust is as alive in our hearts, minds or collective unconscious, as it is in the memories of its few survivors who are still around. There is only forgiveness, and no escape for those who do not seek it. I know that God's law tolerates no exception. I know that God accepts no argument, no pragmatism and no delay in the execution of His eternal will.

Proverbs 21:1 "The king's heart is in the hand of the LORD, as the rivers of water: He turneth it whithersoever He will."

But there is hope - God can still change Mr. Obama's soul, and we can do our part by prayer. Thy kingdom come, thy will be done, on earth as it is in heaven... We can command the love of heaven to earth, and we should do so now. Prayer, repentance and submission under God's loving will had changed the hearts and ways of many of the kings of Israel, and why shouldn't it change a democratic leader of our day. God can do so, and He is eager to do so, and we can certainly play a role in it, now that the ballots are cast.

Romans 13:1 Let every soul be subject unto the higher powers. For there is no power but of God: the powers that be are ordained of God.

No matter what deception he used, regardless of the secular multi-media power behind him and the obscene amount of moneys spent - Obama was elected by a Christian virtue, that of hope. People put faith in him, and experience shows, that where there is faith, it can be put into other things, and persons, too. Let's pray that the American people will put their faith in God alone (again), and see that all other things (and people) are subordinate, and subject, to God's will. Jesus was an optimist from the beginning of time, and so am I. America is a wonderful nation, and still the most faithful nation of our time.

John 19:11 Jesus answered, Thou couldest have no power at all against me, except it were given thee from above.

All the very best from Berlin,

I am ashamed to admit I have been cowed by my friends who have accused me of being a one-issue voter (sigh, which I am, and always will be until abortion has ended). Shame on me for not yelling right back. This articles gives me my, um, ovaries back.

Tonight, after reading this, I went to my parish's prayer service for the election, then proceeded to another parish's adoration chapel to say the rosary.

Should BHO win, it will be a sad day for unborn children everywhere and women of color in developing nations, especially, who are going to get artificial birth control and abortion stuffed down their throats (thanks to BHO's cozy relationship with Planned Parenthood and people like George Soros). We could be in for a very bumpy ride.

God bless you for giving voice to what many, many, many men and women know in their hearts to be true.

Several folks also sent me an article by Fr. George Rutler about a book by Robert Hugh Benson called The Lord of the World. Written in the early part of the 20th Century, the book eerily seems to predict the whole weird cult of Barack that we have watched unfold in these last few months - a guy with nothing to recommend him except style comes forward and sends people into thrall. They faint in front of him and place on him all the kind of hope and adulation that is proper to God. It doesn't end well for the world.

The most interesting reactions to my post were the ones from people who were enraged about the picture of the little hum an slaughtered by abortion. People seemed more infuriated by the fact that I had posted the picture, than they were by the contents of the picture itself. Amazing, no?

What you had in that reaction was fury that I would distract them from their ravings about Obama's compassion, wisdom and how much he "gets it" about the poor, by an image of the barbarism that he actually stands for. 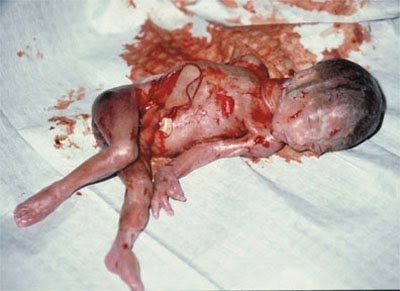 Please, please, do tell me about how humane Obama is. And how he won't torture people like the Bush Administration, and how he wants every child to have a great education. Please, do go on. Don't let the evidence of your senses sidetrack you from what you want to believe.

I wonder if the people who are enraged by these images get similarly furious when people post pictures of starving children in Africa, or of civilians killed in bombings in Iraq, or of the people being persecuted in Tibet or East Timor?

No, they don't hate those photos, do they? Because those are so safely far away. It's creepy to see the images of the aborted child who might have been your next door neighbor but for your vote for people who support abortion rights. Somehow, supporting those who support slavery, makes you complicit in slavery. It does. Yes, it does.

So, the pictures are really, really uncivil of me to post, aren't they? Don't want to have to think about those babies. Those tortured faces and massacred little bodies. Want to think about "hope" and "CHAAAAAAAAAAAAAAAANGE!"

Good luck with that.
Posted by WGA Member at 7:23 AM