Shaken Awake by The Boy in the Striped Pajamas 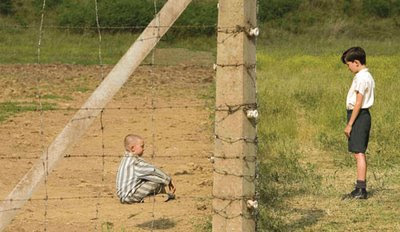 I'm in the Phoenix airport and the Wi-Fi here is uneven (- which I find disconcertingly cheeky. Don't they know that Obama has been elected and has ushered in a new era of complete transformation of hope and change?!), but I wanted to send a heads-up for the haunting and eerily relevant movie now in theaters, The Boy in the Striped Pajamas.

The film is being distributed by Miramax and was co-produced by BBC Films. It is worthy of your time and I think should be a must see for teenagers and perhaps junior high students depending on their maturity.

I generally have a bias against Holocaust films. They have to work very hard to win my recommendation because so many of them seem to just rehash the same issues over and over again. I also tend to smart against the notion that the Nazis were the worst thing to happen in the 20th Century. It seems to me the crimes of the Gulag and Mao and Fidel and the other leftist dictators have been arguably worse. They certainly lasted longer. But anyway, be assured that you haven't seen THIS Holocaust movie before. While we have seen the German perspective, we haven't seen it from this angle.

Dramatically in "the eyes of a child" genre, The Boy in the Striped Pajamas is all about the inevitable personal toll that an individual will have to pay for dabbling with evil. Set in a German family in WWII, it provides a fly on the wall look at a family just like yours - two cute kids who are the center of their parents' world, a mother who is proudly supportive of her husband who has just gotten a promotion, a little bit of tension with the mother-in-law who seems stuck in disapproval of the new ways, and a young husband and father who is just trying to earn a living in the new Germany. The thing is, he just happens to be an SS officer who has been promoted to be commandant of a death camp.

The eight year old son, Bruno, provides the point of view of the film, and he does the confusion and boredom with adult politics and inconsistency very well. The inconsistency here is in the parents who are raising their two children to be delightful, well-rounded good people....all the while trying to keep the uncomfortable truth of the death camp at bay.

The two highlights of the film are the haunting score by the uber-talented James Horner, and the key performance of the mother of the family, played by Vera Farmiga. Farmiga makes her character so wonderfully sympathetic to us and, then, slowly unravels before our eyes. This mother is not the stero-typical robotic and barbaric "Goebbel's Wife" we have seen time and time again in the Holocaust genre. This is a human being who finds herself being swept along in the weird and increasingly dark momentum of her people's history. She isn't sure how it happened. She never signed on for it all, but by the time she takes action to extract herself and her children, it may be too late. 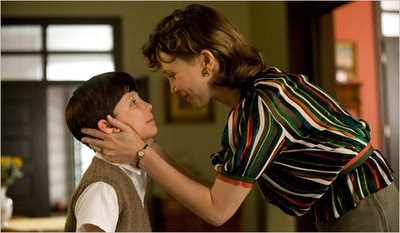 I would love to see Farmiga get an Oscar nod for her work here. So far, her performance is the most notable, and compelling one I have seen this year, with the possible exception of Richard Jenkins' great job in The Visitor.

There is a little bit of controversy about this film. Critics seem to be annoyed that it derives its central tension from the threat to one little German boy, as opposed to the millions of Jews. This criticism seems to me to be idiotic. Every movie derives its power by foregrounding the problems of one or two little people. In this case, the point of the film is to point a finger of condemnation at the German grown-ups here, who thought they could "handle" the evil they were dabbling in. In the end, it becomes a snowball rolling down hill that has the same effect as in the life of the Pharoah Ramsees when he perpetrated evil on the Hebrew people. If you do evil, it will consume you...or at least your children.

The film is not at all graphic, but the end is very disturbing. The people sat in the theater silent during the credits. The ladies behind me were wiping away tears. But I think everybody needs to see it. ESPECIALLY this week when so many Christians have seen their way to compromising with the greatest social evil of our day - abortion. Our people voted to overlook a little thing like the slaughter of the unborn, because of other considerations like economic prosperity, climate change and the desire to have all the other nations in the world like us again. This kind of a choice gets a very dramatic and cautionary treatment in The Boy in the Striped Pajamas.

I walked out of the theater ashamed of my country, and for the first time in any Holocaust movie, seeing in the German people not a scapegoat of history, but people just like us Americans in 2008. Only we will get judged harsher then they will, eh? Because we had their mistakes to study. My thought as I drove away in my car was, "The only real lesson of history is that people never learn from it."

Strong recommendation for The Boy in the Striped Pajamas.