I've been very sad ever since hearing the news about Tim Russert's death. I've been a political junkie since I was very young, and Tim has always been there in the background. We used to watch Meet the Press in my family every Sunday morning. It felt like Tim was part of the family.

He seemed to me to be a very fair man. And in a media environment in which the polarization in the main networks was so often achingly and insultingly consistent, I never felt like Tim Russert was part of that. We never knew from the way he questioned his guests if he agreed with them or not. He wasn't at all like Chris Matthrews or Larry King or Bob Schiefer in that way. I was always relieved to see him behind the desk in debates or interviews, because I felt like he was on the side of America as a whole -- not just the left.

Here's a shot of Tim getting an award from one of our great Hollywood priests, Fr. Willy Raymond, the Director of Family Theater. Not sure what the award was for, but it was cool of Tim to show up to get it. He was a gracious man. 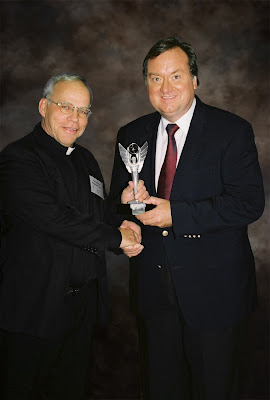 We're all going to miss him. IMagine that. An entire nation of 300 million people missing one man. That is quite a tribute.

Eternal rest grant unto him O Lord,
And let perpetual light shine upon him.
May he rest in peace. Amen.