The Fault Lies Not in Your Television, But in Yourselves 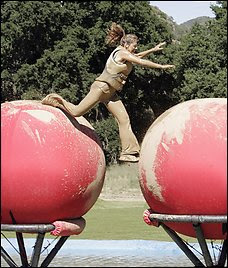 I just have to ask. Why, oh why, America, did so many of you watch ABS'c latest summer entertainment for the brain dead, the idiocy-fest Wipeout? It was the biggest summer premiere for the network in the last three years.

Which means we will now see many similarly themed, but probably not as stunningly produced and intellectually stimulating, knockoffs on the other networks, and certainly a rash of super-extended, extreme degradation Wipeouts on ABC.

All I hear as I travel around the country is how all of you out there want better entertainment on television. So, why, why did someone in your house vote for Wipeout this week?