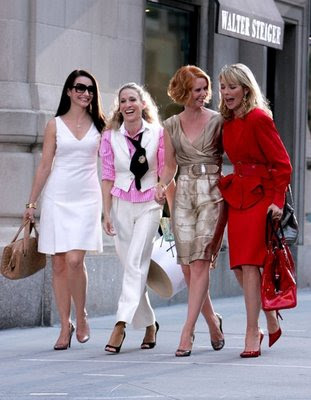 (Sorry, but you have to give me a couple stars for just how clever that heading is.)

I saw this film on its opening Friday a couple weeks ago, and have been wanting to blog about it ever since. I was going to post a mostly positive blog, but then I started reading a lot of what other Christians are writing about the movie and I chickened out.

I am also always fascinated by how episode after episode of the source material TV show here - and to a lesser extent the movie - seems to be a Genesis mystery play built around God, rubbing the Divine eyes in the Garden and grimly forecasting to the Woman, "Your desire will be for your husband, and he will Lord it over you." SATC is nothing if isn't watching women desperately trying to obtain and then maintain the male focus.

Everybody is talking about rampant materialism in SATC as manifested by Carrie's and her friends' 800 or so costume changes (yes, I'm exaggerating, but it really seems like there are that many fashion moments in the movie). Really, this didn't bother me, and in fact, this was one of the "cinema of attractions" elements that I really enjoyed in the film. The clothes in Sex and the City are like the CGI special effects of a planet getting nuked in a male-oriented action flick. I mean really, why are shots of a super dress with great accessories more ominously bad for the culture than a bunch of dudes whooping it up at a visually clever rendering of an 18 wheeler bursting into flames? From one standpoint, I was enjoying the fashion moments as just appreciation of the art form of women's couture. I never felt that Carrie's love of fashion was about showing up other women or making herself feel compete. She's just really attracted to the beautiful as it presents in silk, satin and heels. Nothing wrong with that.

SATC is largely the stuff of female fantasy, although the real fantasy here is not about clothes and swinging in NYC. The fantasy strikes me much more as being the desire for the kind of friendship that the four main characters have in each other. Imagine if you could actually have three friends who would drop everything and just fly off with you to mourn in Mexico for a week or two. Despite her struggles, Carrie has something most of us want, a few caring somebodies that she can always call, who always accepts her no matter how big she screws up. That's the fantasy behind the show's success. And it isn't an altogether bad thing for people to want for themselves.

And yes, there are two or three brief but certainly over the top, sexually graphic moments in this film. But they aren't prolonged and I almost felt like they were there almost apologetically, like the audience didn't leave the production company a lot of choice, seeing how the rep of the show is that it is unabashed about sex. I also don't think they undermined the whole good of the film for its almost exclusively Gen X female audience, which needs to hear the producers' underlying assertion here. Because, in the end, the explicit message of the film is a good one, and it is laid out very strongly and reinforced in all the sub-plots.

Contrary to the bad rap the film is getting from a lot of conservatives, the real theme of SATC is not, "be shamelessly promiscuous and materialistic", but somewhat shockingly, "If you don't forgive, you will never have a happily ever after." All of the main story lines in the movie are about the need for mature relationships to move into forgiveness. And reaffirming that the film is really most about the female friendships, the most poignant moments in the film come around the falling out between Miranda and Carrie that comes towards the end of the third act. When Miranda demands that Carrie forgive her, and Carrie throws back at her friend her own refusal to forgive poor hapless Steve. The movie wants to tell its audience in no uncertain terms, that loving without forgiving will leave you shallow and after a few rounds with different relationships, very cynical. Everybody has to learn to say, "I'm sorry, " and then to accept others back into their lives who are trying to say the same. So, what's not to like about that?