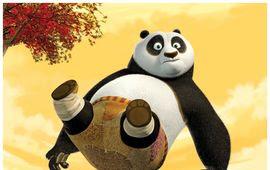 About thirty minutes into the new feature Kung Fu Panda from Dreamworks animation, I found myself thinking, "Wow, Pixar really IS amazing." This non-Pixar film has lots of beautiful CGI, but after the added meaning we're used to from the Nemo/Incredibles/Toy Story people, this movie feels empty - like a Prada suit on a hanger. If we've learned anything from Pixar, it's that even kids movies can have, and indeed, deserve, a meaning. But it is certainly tough to do - as Dreamworks proves by this latest inadequate attempt at kids' entertainment.

And in the interests of full-disclosure, I have a bet riding on what I predict to be the ultimate box-office failure of this project. Mark, a friend of mine from Paramount is going to take me to a really, really nice dinner at Citrus at the old Hollywood Athletic Club, when Kung Fu Panda does NOT make $250 million at the box office. He thinks it will. Confucious say, "He who make bets against Sicilians spend great deal on dinner."

Now, Kung Fu Panda isn't mind-numbingly embarrassing, like, you know, a Walden kids' movie. The animation here is gorgeous. Lots of lovely images of a fairylandish China of long ago. It just doesn't amount to much. At a party yesterday, I expressed this thought to a friend who works over at Paramount and he shrugged, "Well, they went ahead without a script. They just had an idea about doing something in China because of the Olympics this year, and then they set on it having Kung Fu because it is so popular, and then animal characters because it's for kids. But they had no story, when the animators just started drawing animal characters in Kung Fu fights. The story really got pieced together by the story editors." Eggzackly. And it shows. Pixar, takes fourteen months working out their stories. Ahem. Oh well.

There are a myriad of disjointed themes here. For the first hour, the movie seems to be arguing that fat pandas have no reason to live. Then, in the second hour, when the fat panda saves the day, the message seems to be that fat pandas have all the advantages as Kung Fu fighters over disciplined, well-trained, hard-working and committed Tigers, Monkeys, Snakes and Praying Mantis-es (what is the plural of that last word anyway?). And, of course, I don't agree with that. There is also a mostly incoherent message about relying on yourself and not looking for external helps ("there is no secret ingredient"), which I also didn't agree with.

I never really bonded with the main character here. A kind of dumb, fat panda who is a big fan of Kung Fu while making noodles in his family's shop, Po gets accidentally recruited to save the world from a bad, bad cat (I think -- maybe a lion, except he was kind of bluish) who is the greatest Kung Fu fighter of all time. I was never really on Po's side just because he was set up for us to be amiably resilient (-- that is until he decides to quit and has to be talked into staying at the cause by the talking turtle who spent half the movie channeling Yoda). It felt like he was the product of a bunch of animators reaching for cliched character elements as opposed to a cogent, fresh personality. I think little kids might be okay with Po's weaknesses as a hero, but older ones - like 8 year olds and above - are going to be disengaged.

And there's a problem with that because this project is quite brutal. Granted, it's animated brutality, but fully half the film is spent in characters getting the sh*t kicked out of them in visually creative ways. And I'm not sure I would want my six year old to sit there digesting all those kicks, slams, grunts, crashes, stompings, and falls from impossibly high altitudes. Somebody with an expertise in child development help me out here. Do six year olds distinguish that readily between CGI violence and the real thing?

I am not going to pan the panda here, but I am not going to give it the coveted two karate chops straight up either. It's got some cute stuff in it, but, well, they really all can't be Pixar movies.