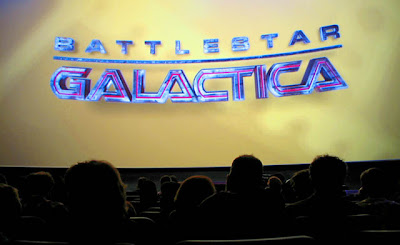 So, Wednesday night I attended the ultimate BSG nerddom event with my friends Vicki and Mark (the foolish advocate of lost cause animated panda movies...) It was the Emmy voters screening of Battlestar Galactica's "For your consideration" episode - which happens to be the mid-season finale airing tonight, "Revelations." The showrunner, Ron Moore, actually had us raise our hands in the air and swore us to secrecy upon pain of spoiler hell, so I won't say anything about the episode here, except... It is one of the best episodes of television I've ever seen. Riveting. Really exciting. Beautiful CGI and cinematography. Haunting music. And the last three minutes manages the almost inconceivable achievement of taking the viewer from the height of exaltation, to the guts-just-got-kicked-out depths of desolation and shock. Amazing entertainment that.

This guy was brought in to protect the cast and crew from sneering and clueless non-believers in the wonder of BSG. 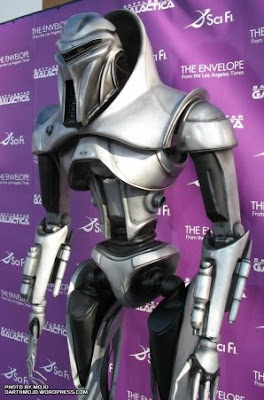 Here is everybody waiting outside to get in. The room was almost full at about 800 seats. 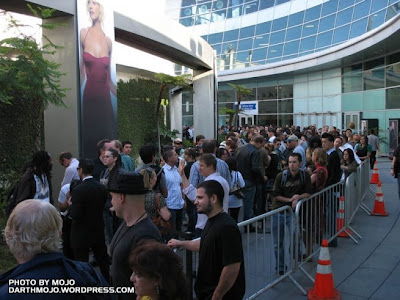 They had these giant posters of the whole cast hanging off the dome outside. Very cool. 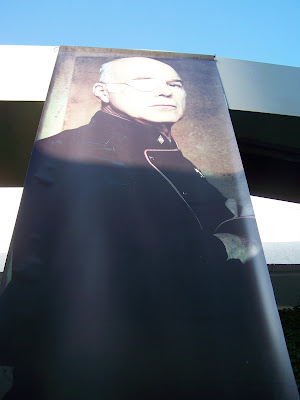 The bloggers over at scifiheaven.net have recorded a minute by minute account of the evening here, that I can't add much more too.

We were sitting up in the plebian seats, so I couldn't get much good with my camera in the dark. But here are a few shots of the panel after the screening. From left to right that is Katee Sackhoff ("Starbuck"), Mary McDonnell ("President Roslin"), Tricia Helfer ("Caprica #6"), and Executive Producer, Ron Moore. 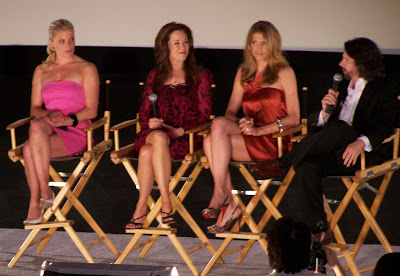 Under the "Actors Should Never Speak Without a Script File" was Tricia Helfer responding to a question about the religious faith depicted on BSG. She noted with a mystical lilt in her voice, "I am very spiritual. But truly an agnostic." I could almost hear all the writers' (sitting in the first three rows) eyeballs smack into the back of their heads. Um. Agnosticism is the deep commitment to being ambivalent. And the ambivalence is entirely about the realm of the spirit. So, you can't really be a spiritual agnostic, can you now? It's like saying you are a tall short person. What is it about the air out here?... We also had to endure Mary McDonnel making a coy pitch for Hillary Clinton. Sackhoff thankfully didn't stray into trying to preach or politicize - just sat there looking slightly uncomfortable at these two comments. She strikes me as being basically well-bred. Or maybe it's her serious commitment to Christianity that makes her gracious. Anyway, she didn't say anything particularly smart or worth hearing, but she wasn't embarrassing. 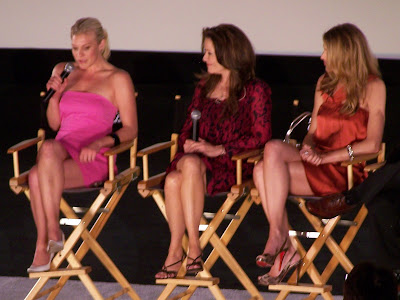 If there is any righteousness in Hollywood, Mary McDonnell will get an Emmy nom for her work on Battlestar Galactica especially this season. She made a lovely point about the way that her character's slow death from cancer during this season, has been accompanied by her spirit/inner person being slowly saved. I agree. Thematically, Season 4 has mainly been about Laura Roslin's movement into grace. It's been wonderful. 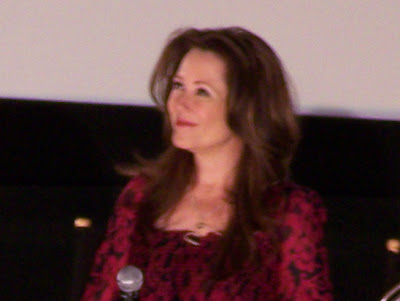 (I lifted the first three pictures from here.