Shalom from the Sea of Galilee! 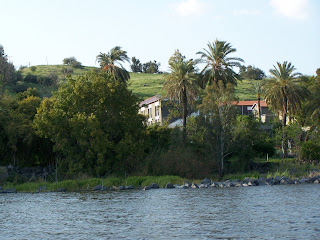 Here is a shot of where I'm posting from on the shores of the Sea of Galilee. We're staying in a lovely German Catholic guesthouse - called Pilgerhaus, or something like that - just beneath the Mount of the Beatitudes, and a short walk to the Chapel of Peter's Primacy - "Simon, Son of John, do you love me more than these?...Feed my lambs.") I took this shot from a fishing boat on the Sea looking towards the shore during a boat ride we had yesterday.

I've been in Israel since last Thursday and have had a lifetime's full of new adventures since then. Been to Jerusalem and many of the holy sites there. Been to Qumran and Masada and En Gedi and Jericho and the Dead Sea. Been to the Negev desert on a camel named Jafar. Been to Capernaum and Tiberias and drove by Migdal (Magdala - but they say there isn't much there to see) and walked a bit through the Wadi that leads from Nazareth to the Sea of Galilee. And we have met and had great conversations with many of the people of this land - Biblical Archeologists, US ex-pats who have made Israel their home, Armenian Catholics, a French Canadian White Father stationed in Jerusalem, Arab Christians, Messianic Jews, a member of the Knesset, and more. The rest of my small group went up to the Golan Heights today and to Nimrod and Ceserea Philippi, but I opted out. I'm totally on overdrive and need to download some thoughts. I'll try and post some of what I write here. Stay tuned.

Meanwhile, here's a nice shot of the Mount of the Beatitudes from the Sea. 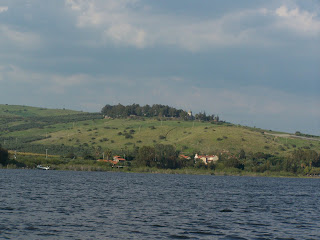