The first day we were in Jerusalem, we had a long tour of the Temple Mount with one of the leading Christian Biblical archeologist professors in the city. He was amazing and had that "rendered gentle by the Gospel" quality that you find in people who have taken the Jesus thing really seriously for decades. At lunch I asked him, "So, what is it going to take to bring peace to Jerusalem? What needs to happen to change the tension here?" And he said, "Well, I think the only thing that can happen to fix this place will be in the Second Coming of Christ."

I laughed, "Well, that's kind of a tall order. Not a lot of urban strategizing emerges from that."

A week later, it seems to me that he was so right. This place is really, really complicated. (And I can't believe I just said that. More about why further on.)

I love Galilee. I really, really get why Jesus picked this place. And we'll get back to Galilee.

And I feel guilty to ask the question, but, am I allowed to not like Jerusalem? Because I really didn't like it. I was angry a lot there. And definitely a bit revolted. My Christian friends there keep telling me that the city grows on you and that you begin to love it. But that would be a big stretch for me where I'm sitting now beside the lovely, restful waters of the Sea of Galilee.

What about Jerusalem made me angry? Well, you have to be there to really understand. Because no matter how artful my language, nothing will convey to you the gross incivility, inappropriateness, and intrusiveness of what seems like a gazillion Arab mosques all projecting their whining call to "prayer" on loudspeakers every few hours. It is jolting and HORRIFIC. Like cats screaming in alleys in stereophonic sound. It's the kind of thing I'm sure they do with sound in concentration camps to break the will of the prisoners. And it made me mad.

The minarets screaming everywhere discordantly in Jerusalem are way more than Moslem acts of loving devotion to God. They are clearly provocation in a city which is already tense as the center of focus for several major religions. It is the Muslim version of "We're here and we're queer!"

My first view of Jerusalem was on Thursday night, from the Mount of Olives. I was trying to block out the squalor of the Muslim houses on the mount overlooking the Old City and the scariness of the dirty Muslim children relentlessly harrassing us for money. (Gotta say, there are lots of poor Jewish families in Jerusalem, buit their kids are always well cared for, and mannerly, and they don't beg.) Looking over the Kidron valley to the Old City, at night, one is immediately struck by the "what's wrong with this pictureness" of the Muslim towers with their garrish neon green lights scattered all over the landscape. We've been up and down Israel this week, and nowhere have I seen as many of these things as in the Old City. Even in Jericho, which is entirely Muslim, we only saw one minaret. And we never heard the screaming on loud speakers there.

(Here's a shot of the Mount of Olives during the day looking across the Kidron Valley from the City of David. I think the point of this photo was to show how the Muslims built their houses over old tombs. See the holes in the hills under the houses?) 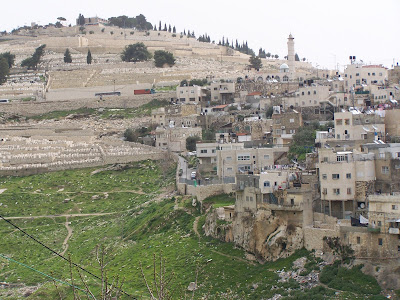 Some of the Christians in Jerusalem told me they don't even hear the minarets anymore. I suppose you can get used to anything. But I found it teeth-on-edge jarring.

At dinner one night, I asked our guest, a politician from the Knesset, "Look, why don't you sit down the Islamic leaders of the mosques and ask them to please respect the other people in the city? They don't live here alone, and it is completely uncivil for them to dominate this whole environment with their screaming over loudspeakers. They can certainly have their call to prayer in normal voices, but doing over electronic loudspeakers is intrusive for the rest of us who aren't Muslim."

The Knesset guy responded, "It is complicated."

Now, since coming to Israel last week, this is definitely the most oft-repeated line that I have heard from everybody. From the grand to the humble. From scholars to handy men. From folks of every faith. Eventually, in every conversation, someone shrugs with pain and emits, "It is complicated."

I said to Knesset guy, "It isn't complicated at all. Why should one group be allowed to dominate the city with their noise?"

He replied, "You cannot sit the Muslims down and deliberate with them. They only know how to dominate. They don't compromise. We have elected to give in to them, over and over, to appease them, because there is no other way."

I continued, "If they won't be reasonable, then why don't you tell them, "Look, if you don't turn off the electronic screaming, then we are going to mike up all the Jewish folks who are praying by the wailing wall. And we are going to mike up every Greek Orthodox, Armenian, Catholic and Christian service in the whole city and play all their services loudly around the clock. Every damn prayer that goes up from Jerusalem will be broadcast in one devout sonic boom."

Him: "We back down...and I suppose we hope eventually something will happen to change the dynamic."

Ah, the geopolitics of audacious hope. Good luck with that.

And why was I revolted?

Well, until you have seen the Via Dolorosa you can't understand. Christianity in Jerusalem is really mostly irrelevant from the standpoint of the Jews and Muslims who run the joint. With the notable exception of the Garden of Gethsemane, the sites where the redemption of the world was accomplished are obscured and underemphasized. The Orthodox Jews who run the city consider Jesus anathema. He is a scandal and a horror to them. So, on the main Biblical sites - like the Temple Mount or the Pool of Siloam or the various city gates mentioned in the New Testment - there is no mention of the fact that Jesus Christ walked or stood there. The place where the Son of Man shed his blood on the Via Dolorosa is completely overrun with lines of garrish shops selling every kind of kitsch. The place where Jesus carried his cross is the main shopping alley in the Old City, jammed with hawking and pushy vendors. It's fetid and dirty and beyond weird to see a dirty plaque on the wall reading "Eighth Station" in between a t-shirt stall and a smoking gyro grill.

In the end, I started to see a spiritual significance to the horrible banality of the Via Dolorosa. God walked by and did the incredible, and most of the folks then missed it. And we today still miss it. But I can't believe that 2000 years of Christians haven't managed to turn the whole passage into a quarter of a mile long meditation garden. Or paved it in gold or something. Honestly, it has all the holiness feeling of some filthy side street off Times Square.

So, I really didn't like Jerusalem. But we are going back for four days next week, so maybe I'll see it with different eyes. (Or maybe my ears will become accustomed to the minarets?)


Here's a shot of the Old City wall which is just over the City of David (site of David's Palace). You can see a corner of the mosque built on the Temple mount and one of the ubiquitous minarets in the center.) 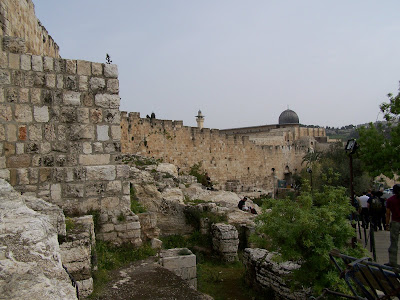 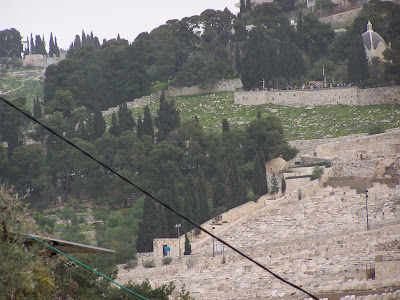 I think Barb's comments on the situation in Jerusalem are especially important in light of the parallel between the hegemony of the Muslim population and their view towards women (in light of Jerusalem = motherhood/women/temple, etc.) On bad days, I think this is uniquely dire; on good days I imagine that it's always been thus in David's city -- it will be chaotic unto the consummation of the world.

Awesome blog! It was very descriptive. I saw some mosques on the discovery channel and agree with you about their atmosphere. They seem noisy and chaotic, and the people seem to submitting to an oppressive and unloving god. Jerusalem is more chaotic then what I imagined, thanks for the warning. I hope to visit next summer, if it is safe.

Watch this Matisyahu videos, they might change your mind.

Barbara, this post deeply saddens me. At first read I was angry at your anger but now I am left with sorrow for all that you missed. Your perceptions are colored by your American Christian eyes. Mine too, but you sound like the typical rude American. Your comments concerning the Arabic children are uncharitable. There are Christian Arabs there as well as Muslim and they are struggling. Some of these children may be Christians. Your comments concerning the Muslim "whining call to 'prayer'" were themselves whiney. As for the shops along the Via Dolorosa, as you say, it is a shopping area and tourism is a huge part of the economy.

What you missed is the holiness, history and wonder of the place. Our Lord walked there, preached there, died there. Yes it is loud, discordant, dirty, multicutural now. It was then too. You are not on main st USA for goodness sake. You are in the cradle of faith. It is ancient and amazing.

If you listen for God you will hear Him and feel Him strongly there. Don't be sidetracked by the flesh, the world and the devil. Reach for the holiness. Just as we must focus on our Lord in worship and not be thrown off by the crying baby, coughing parishioner or off-key singing behind us, you must focus in Jerusalem. He is powerfully present in that place. I pray you feel this as strongly as I did there last year.

If it is not too late, I recommend that you visit with Rabbi Moshe in the Old City. He spoke to our group of Christians at the shop last year and he is breathtaking. Please try to get past your first reaction and delve deeper.