Not Much to Wine About 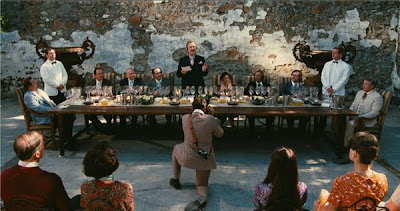 Bottle Shock, could do for Chardonnay what Sideways did for Pinot Noir. At least it will send wine Neanderthals like me surging out of the theater desperate to slake a strange new thirst for the Napa Valley golden wine that is the heart of this quirky little movie.

Bottle Shock won't get the attention that Sideways did, because it is not as outrageously crass as that prior movie, but it actually has a better and bigger story. I'm not sure that the film makers were completely aware of this fact, however, because they spend an awful lot of screen time diddling around with mostly draggy and often irrelevant character moments. But the movie for me was ultimately saved by the charming and "triumphy of the human spirit" story elements which are based on real events.

The movie relates the story of how the Napa Valley wine industry was born, taking the Valley's vineyards from the expensive hobby - almost fetish - of some California farmers and idealists to the triumphat introduction to the global wine stage that occurred when Nappa vineyards defeated the dominant French wine industry at a 1973 blind wine tasting held outside of Paris. There is a lot of time wasted in the film in broken family-father/son angst and interracial romance, and in scratching heads over the weirdness of the 1970's, but the movie manages to ascend these sidetracks to make for an enjoyable piece of entertainment that has something for the mind, something for the heart, and the sparkle of deep reds, golden whites and purple grape laden vineyards.

As with Sideways, I enjoyed everything in the movie about wine and winemaking. The whole wine thing in movies, seems to me to be a metaphor for the human nature thing. Our love and appreciation of something like wine demonstrates powerfully that men are not beasts, and that there is something called the beautiful that exerts a powerful draw on us. 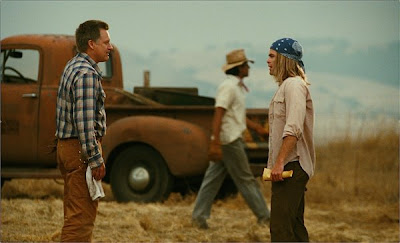 Similar to a movie like The Perfect Storm, Bottle Shock is almost entirely about an arena and the people who inhabit it. Who are these people who slog away in the hot sun of Nappa, mortgaging everything they have to buy one more set of barrels all to get the most perfectly clear Chardonnay? The character stories the film makers manufactured here to satisfy the Hollywood formula of small world foreground story aren't particularly profound, but they work as part of the backdrop of the whole Valley life and culture.

Alan Rickman is perfect as the British wine snob who loves French wines, but loves wine itself more - which allows him to get past his disdain of the roughshod California ranchers to really experience the beauty and wonder of what they are bottling in Nappa. The other main draw of the film is the look and sweep of Nappa itself - the vines wrapping around gentle hillsides, the sun's rays finding a ripe purple clump of grapes, the lush perfection of a deep red vintage being poured into a glass. It's nice.

The theme of the movie is expressed by Bill Pullman who plays a struggling Nappa rancher, obsessed with developing the perfect Chardonnay. He says to his young intern (slight paraphrase) "We don't water the vineyards too much, because it makes the vines have to struggle. Vines that struggle produce a tough grape and then a full-bodied, complex wine." Very cool.

There is really nothing here people need to be afraid of - a quick out of wedlock tryst, and maybe one or two curse words - but both are appropriate in context.

Bottle Shock has a gentle, quirky aura. It's texture is alternately light and then surprisingly affecting. The aftertaste is pleasant and satisfying. You'll want to stock this one in your cellar.