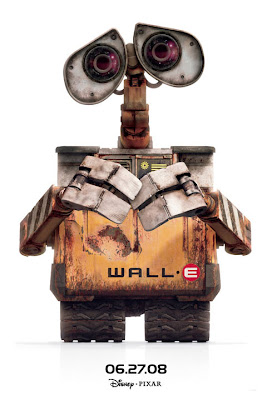 I know it's brilliant. I just don't know exactly what it is.

I know what it isn't: a kids movie. It's too cynical. And too foreboding. I say this as someone who thinks Bambi/Lion King style tragedies are good for kids. Wall-E is different than these in that it is on many levels like a bedtime story based on Al Gore's Power Point movie. And I admit that made me uncomfortable for part of the film. I remember feeling waves of disappointment that Pixar was going to become one of those companies that just couldn't resist the lure of using their power to politicize instead of entertain. Because the movie maybe does just spend a few minutes too long showing us the remains of our planet a few years from now, after we bad ol' humans have wrecked it through an orgy of consumerism.

With an agenda to try and make people think about where we are headed as a society. it probably would have worked much better if the movie were set on some far away planet, like say the way Battlestar Galactica (2003) works. That show feels safe for the audience - not like politicizing - because the issues it raises are safely distanced from the corner voting booth by thousands of years and strange planets far, far away. But in the end, I am giving WallE a thumbs up because I think it was much less about environmental wacko-ness ("HUMANS ARE EVIL AND BAD FOR THE PLANET WHICH IS GOD!") than it is about greed and materialism. And I am always all for another explication of one of the seven deadly sins.

The humor in Wall-E seems to me to be mostly inaccessible to small children. Even the older kids at the screening we attended (I'm talking the eight to ten year olds) sat there almost politely, waiting for the rush and delight of Finding Nemo and The Incredibles. It only came briefly in the one sequence in which Wall-E is floating through the solar system, a sequence which had all the wonder of the undersea vistas that made Nemo so lovely to watch. Several of the younger ones were actually taken out by their parents. There was one little boy in our audience who kept asking every thirty seconds, "What does that mean? What is happening?" The humor here also wasn't the witty jabs of the Shrek movies. Wall-E's images of obese humans being moved around in digitally created fantasies was much more wry than wit. Again, it felt like the filmmakers had a bit of an axe to grind. All about how materialistic we folks out in the audience all are.

Which is rather cheeky coming from Pixar, whom I don't see returning any of the 8 billion dollars they have made on their movies, and ancillary deals to put Nemo on Whopper wrappers, and Incredibles action figures and games and costumes and books and lunch boxes and Halloween costumes and....well, you get the point. I thought while I was watching Wall-E clean up all the trash left behind by the humans that the Pixar I know and love would have had at least one of those monumental trash compacted structures be made up entirely of scuffed up Pixar generated ancillary products....But they were being just a bit too earnest here for that kind of self-deprecating humor. Too bad. It would have worked and hence helped them in their thematic goal.

WallE is in in many ways a charming old style love-story - like um, Hello Dolly maybe? There are too many wonderful craft moments to mention - but I want to send a particular shout out for the use of the music from Hello Dolly as a aural contrast (read paradox) to the visuals on the planet. It was really genius and achieves so much for the storytelling that I was in awe.

Also on a narrative method level, it was incredible to me how they took us through nearly an hour of film with almost no dialogue track at all. I felt like I was watching a brilliant throwback to the heyday of silent cinema, before all the chattering heads came in to tell us how to feel. WallE is brilliant visual storytelling. Almost too brilliant, because as the story picks up pace, there are often two or more things going on in a frame and if you aren't watching very carefully, you will miss jokes and beats.

One friend pointed out to me that the movie is unabashedly a vision of heterosexual love. I hadn't thought of that before, but I think it's probably true. You have WallE the male, loving and then risking his life to protect the female robot EVE who is carrying the seed of new life in her "womb." So that's good. Probably too late for our society which is exhaustedly hell bent on trying to pretend that gender is irrelevant. And I do mean hell bent...

I thought the portrayal of the humans on the space ship was somewhat disappointingly over the top for Pixar. It seemed to me to be a lie about human nature - we could never all of us become just fat, lazy blobs with no passions or desires to learn and grow. I get that they needed to go that way for the storytelling, but by the way it made me uncomfortable - not emotionally but as a viewer of the craft - made me conclude it was a narrative misstep.

But do go see the piece with your teenagers and adult friends. It isn't Pixar's best piece of entertainment, but I would say that it is arguably the best piece of pure art they have produced. Enjoy.