The Visitor: A Very Welcome Guest 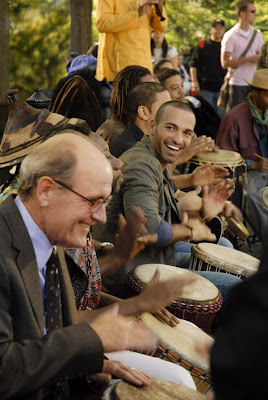 I loved this movie. And, really, how often do I say that? It's the whole package - powerful story, wonderful characters, important theme, great performances, artful direction....and a couple of really lovely haunting moments.

I was excited to see the film as soon as I heard that it was coming from Tom McCarthy, the actor turned writer/director who gave us the happy surprise of The Station Agent a few years back. This new film gives the director a somewhat bigger budget, and a much higher stakes story (U.S. immigration policy post 9/11), and McCarthy is absolutely up to the task.

Character actor Richard Jenkins certainly helps out in skillfully fleshing out the tentative journey of main character, Walter from deadened and isolated by grief to engagement with some people in need, and then to love and full-awakening as a human being. The other three main performances in the film are deliberately understated, but very solid.

The basic story is that Walter is a widowed college professor, who has lost all meaning with the death of his wife. Fate brings him to NYC where he makes a musical connection with a young Syrian man and the man's Senegalese wife. The couple's messed up paperwork eventually puts them at the mercy of the U.S. government's post 9/11 uncompromising immigration bureaucracy. As Walter is drawn more and more to help the young couple, he is surprised by love and then a renewed sense of purpose. It's a great movie.

Very similar to Juno, The Visitor tackles a hot-button political issue in a non-political way. The movie is very wistful about the way the tragedy of 9/11 necessarily destroyed America as an open society. It doesn't condemn or even mention the Bush Administration or the Patriot Act. The movie isn't about that and acknowledges the terrribly complexity of trying to avoid another 9/11. The Towers are in the back of the movie's mind all the way through. The Visitor is just one story of the ironic human reverberations of the tragedy which meant to take down the U.S. government, but in this case, takes down an innocent Syrian man, his mother and his wife.

Lots of beautiful images and frames in the film. My favorites were the night sky over Manhattan with the missing Twin Towers ghosting over the scene, and then at the end, the blurred shot of the American flag as though seen through tears. 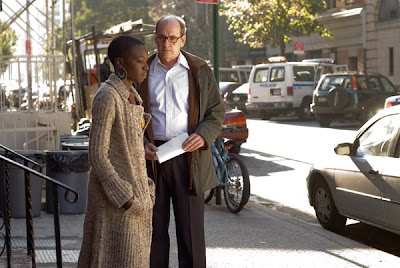 Anybody who has endured the demeaning horrors of being frisked and barked at by a loutish TSA agent at an airport (Where do they get these people? Maybe from the lists of those who failed the exam to work at the post office?) will resonate with the depiction of soulless government bureaucracy that orchestrates the central tragedy in this piece. I felt my heart-rate furiously rise with Walter when he finally is leveled by his impotence to move the monolith of U.S. government policy as articulated flatly by a dull-eyed immigration goon through a glass window. Eeeeew. The memory of the scene still makes me shiver.

But in the end, this film is not a tragedy, but a triumph of grace. It's hard won grace, in that a man's reason to live is purchased at a very high cost. The movie's wonderful closing scene could convince the most brittle, world-weary cynic, "It's better to have loved and lost than never to have loved at all." It's a very humane film that will touch your heart and make you think. It won't make you mad but more compassionate.

Do spend some time with the The Visitor. You'll be better for it.