[Uh, SPOILER ALERT. Stop now if you don't want to know what happens in BSG Episode "Six of One..." You can also forego this post if you think I have completely lost my mind about this show, and aren't watching it. It will make no sense to those languishing in double ignorance of the greatness of BSG]]

Well, boys and girls, we're back in business. The second episode of the season was just wonderful. Super writing. Stellar performances. Several surprises. Including some shocking cylonicide!

The main kudos on the acting side have to go to Katee Sackhoff, who held nothing back in convincingly taking our beloved Starbuck deep into the borderline psychotic end zone, but wondrously never let the character become unsympathetic. That is a trick. Sackhoff not only held her own in her scenes with veterans Eddie Olmos and Mary McDonald, she frakking rendered them invisible. I had the feeling they were just as awed by what she was doing and were thrown a bit off kilter. Sackhoff's range was impressive. Writhing in agony on the floor in one scene and then achingly understated in what is definitely the best Lee and Kara scene we're seen in the series thus far. (The scene was so amazingly written, making subtle references to many of the most angst-ridden Apollo-Starbuck moments in the past three seasons. But it had a great sense of resolution. Like these two folks accidentally have become grown ups, so that even if the show ends up breaking our hearts by keeping them apart at the end, it will be okay. I felt like Lee and Kara had kind of made it as people after that scene. ) If there was any justice with the television overlords, Katee would get an Emmy for her work in this episode.

From a story standpoint, I am taking the official position that Kara died and then was resurrected by God to save the human race. The old Christ-figure in the female body trick.

The whole Cylon Civil War was a blast and finally, shockingly uncivil. I loved what the show is saying here in that the Cylons have now appropriated all the foibles and evils of the human race that they had set out to extinguish. I think it is getting clearer all the time that the skin-jobs are actually human clones. But, you know, with the talent for reincarnation.

My only quibble with the season so far - you know, the first two episodes, is that we haven't gotten to any of the sociological double entendre which defines BSG and makes it so smart and cool. There isn't anything yet that would situate the show in it's uncomfortable comfort zone of dabbling metaphorically on post 9/11 America. But I'll forgive them because they are doing such great things with the characters.

For example, I loved, loved, loved that the atheist Admiral is being drawn out of love to embrace the idea of the miraculous, while President Roslin, the mystic, has become the pragmatic doubter of the same. Flip, flip! 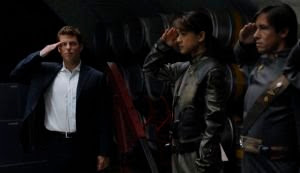 After two episodes, my vote for the last of the Final Five is a sixty-forty tie between Baltar and Lee. I lean a bit more toward Baltar, because Cylonness would be the only satisfying explanation for his, um, inner life. The info that his inner 6 chick has fed him has gone way beyond the ramblings of a vivid imagination. And besides, we see Baltar get killed every week in the opening credits. The reason I am keeping Lee in mind too is that I think it would be the last huge hurdle for Kara to get over if the love of her life turned out to be frakking toaster. And also because Leoben predicted that "Adama is a cylon." And also because I'm still holding out that Lee is going to take a deeper turn on the dark side now that he is going to become the terrorist Zarek's apprentice.

But I will countenance other theories...