[Bleary-eyed, icky feeling greetings from the Charlotte airport, where I have a two hour lay-over on my way to Cleveland after the red-eye from LAX. I fly back to Los Angeles tomorrow early and then to Vegas for a conference Friday. When I get back to L.A. on Sunday morning, it will be the end of my nearly solid month of traveling. I'm behind in every category in which a human being can be behind, so to those of you waiting for me to give notes on a script, or get back to pin down a future speech, or solidify a lunch or just respond to friendly greetings, I'm sorry for being so unresponsive. The situation has been exacerbated by the fact that my poor little tiBook died on day three of my trip back on March 26, and until I bought a new one in Orlando last weekend, I've been unable to do more than log in now and then in a hotel lobby.

Anyway, one of those things I promised to do for some friends was give a "Thunbs Up!" to the new doc Expelled which I saw last month thanks to the machinations of friends Paul and TJ who are working on the promotion for the film. I think it opens this week, so I will hopefully get this enthusiastic heads up in just under the wire.] 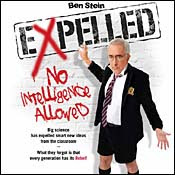 This well-crafted and thought-provoking documentary is not at all what I expected it to be. I should have trusted Ben Stein, as every word he ever says in the public square tends to strike me as thoughtful and balanced. Expelled is all of that as it examines the eye-ball rolling dogmatic materialism that so stiflingly defines the U.S educational establishment. I remember encountering some of this when I was in a Catholic high school, and having witnessed the entrenched Marxism (ie. social Darwinism) jerking everybody around at Northwestern University where I went to grad school, I found Expelled painfully true, and actually understated.

Don't stay away thinking that this project is about a bunch of angry Christians trying to get the Bible creation story taught in high school science classes. The debate over the merits or lack thereof of Darwin's theory is really just the broad canvas for the movie's more basic contention that a society in which open thought is suppressed will devolve into injustice and even brutality.

One of the most resonant aspects of the project for me was watching how little interest the defenders of Darwin against all comers have in being consistent. They oppose one ideological dogma with something that comes down to just another one.

One thing missing from the project was the view from physics. The doc centers mainly on the biological sciences and the evidence there for the presence of an intervening Mind that has particular ways of operating - what my sister used to call "the patterns in nature." My sense is that there is much more evidence in physics for the presence of Mind, but this is outside the scope of Expelled.

The film doesn't deserve the attacks it is getting and deserves to be sen widely and brooded over. It is anything but a right-wing, Christian hit piece, and from a craft standpoint, it is entertaining, funny and very respectful of the audience.

I give it the full, coveted COTM blessing.