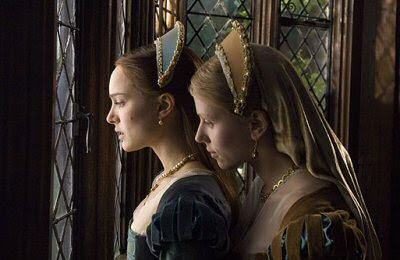 For two hours, The Other Boleyn Girl is about nothing but sex. And I think I am going to recommend it. I found it to be a horrifying (in a good way) morality tale. (Karen - your kind of cinematic romp?) Because of it's subject matter, it's for grownups, although with a PG-13 rating, it doesn't have nudity or graphic sex.

Based on the novel by Philippa Gregory, the movie tells a mostly unknown story of the family of Henry the VIII's infamous second queen, Anne Boleyn, and how her father's ambition, and her mother's paralysis, ends up leading the whole family into every kind of tragedy.

Contrary to the Cate Blanchett Elizabethan movies that demonize the Catholic Church, The Other Boleyn Girl is a scathing indictment of the Tudor court, painting Henry in leotard-wearing Bill Clintonesque - narcissistic, deceitful, and willing to destroy his kingdom to satisfy his sexual appetites. His Queen, Catherine of Aragon, on the other hand, comes across as completely noble and really kind of wonderful - a devout woman trapped in a power-mad, licentious hell. On another level, the movie really, really made me glad that as a female, I was born in the mid-20th Century and not the mid-16th Century. Now, THAT was a damn tough time to be a woman.

I don't know how much of the story here is truly factual, but it is compelling and kept my attention for the full two hours. The movie absolutely knows what it is about - basically a slow spiral into hell and death as the Boleyn family sinks deeper and deeper into insane choices to preserve their status and fortunes. At moments, the movie becomes so horrible that the audience we screened it with kept bursting into laughs that were really groans. People had to laugh because the characters' choices had become so painfully, horribly absurd.

The cinematogroaphy was a bit annoying. Again, my kingdom for some wide shots! Somebody put up a billboard on Sunset somewhere - "To Directors: Just Because You Can Doesn't Mean You Must." I'm really tired of the unmotivated tight closeup. It seems to me a disrespectful attempt by the director to control the audience's eye just a bit too much.

The performances here were mostly good. Scarlet Johansson completely steals the movie from Natalie Portman. Portman was badly miscast here as Anne Boleyn. She doesn't have the sexual seductress thing going on, but comes off as more an all-American girl next door. I never bought that Henry would be so besotted with her. Eric Bana as Henry does a very good job, as does Kristin Scott Thomas as the mother of the three ill-fated Boleyn children.

There's no real lyrical imagery or cool cinema grammar, but the movie is basically a well told story that leaves the audience believing profoundly that it is much better to be obscure and middle-class than rich, powerful, and without all honor.