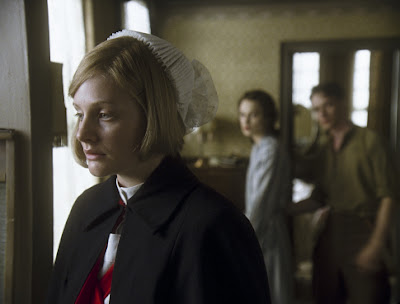 I'm going to recommend Atonement because it is visually stunning and also very respectful of the audience's intelligence. And the story which is the fragile skeleton of all the stunning images is fundamentally true and moral. But I am going to say Atonement is one of those movies in which the real star is the production design, and the story beats, cinematography and performances all serving the visual arena of the piece.

Based on the book by the same name (which I haven't read, but which people are saying makes you care much more about the lovers here than the main character Briney), Atonement the movie is much more about a crime and its consequences in the lives of three little people, than it is about atonement. The "atonement" in the movie is strictly literary, which is desperately unsatisfying to everyone in the movie and in the theater, but it is plausible, so we all suffered the disappointment. In relating the tragic details of an immoral act and a repentance that is just a bit too late, Atonement is fundamentally moral because it makes you regret these things. Nobody gets away with anything in this movie and it is all played as tragedy. Catholic brain had me thinking that even the two lovers who are wronged, set up their own tragedy by committing a series of mortal sins.

I appreciated very much how the storytelling unfolds non-traditionally, in flashbacks, through differing points of view and in the character's own retrospect. The movie dares to not lay all the back story and motivations up front, but to reveal them throughout -- including the main characters principal motivation which comes in a flashback to a moment by a lake that happened years before. It is a relief to see a film that allows me to do my job as someone inspecting and searching into a work of art.

And while appreciating the subtle storytelling, I am sure that for a lot of viewers it will be too subtle and they'll be wanting some more of the dots connected. To those I would say, the motivations you want are mostly all there, or else are in reach of your imagination. But the look of the story, and the recreation of the historical moments - an ideallic British manor in the mid 1930's, and the war-ravaged French countryside and beachhead at Dunkirk - kept my attention through all the moments of ambiguity. 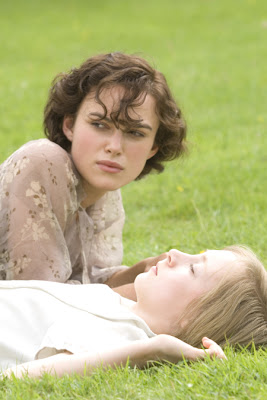 I had some quibbles... Keira Knightly, the most lovely we have seen her rather flat face, is still way, way too thin here. In a bathing suit scene, she reveals all the curves of a twelve year old boy, and in other moments her shape seemed quite concave. Give that girl some bread.... The Dunkirk sequence went on too long and started to annoy me. Narratively, there wasn't much that needed to happen there, so I felt like they had ordered all this production design stuff and costumed throngs of extras, and so were trying to get the most use of them.... We needed way more of Briney in the last half of the film. The sources of her repentance are never explored except to say "I grew up." Yeah, not enough in a movie with the title Atonement.

There is some sexuality in Atonement but the R rating comes more for the startling images of the violence of war. I think those images were all to show effects of violence that are all interior in the life of the main characters so they are not gratuitous. I recommend this film for grown-ups who really like movies as art. (Which is to say that if "Bella" is your idea of fabulous, this one will be over your head. Go buy a Thomas Kinkaid calendar.)