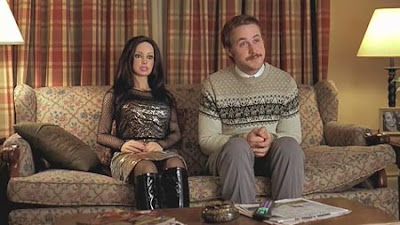 I can't believe how humane the movies are lately. Completely rejecting the selfishness and narcissism of the last forty years, several of this year's best films call for quiet, heroic virtue, that is all about doing your duty and putting other people first. And cynicism seems to have become an anti-trend, in stories in which simple faith and the unconditional love of friends and family are all indisputable goods. Considering Waitress, Juno, August Rush, Dan in Real Life and Lars and the Real Girl there are a whole slew of movies out there right now that are much more throwbacks to Marty than Pulp Fiction. (And granted, there is still lots of bloody cynicism to be had at the cineplex, but there is definitely a contrary trend showing up that would point our society in a whole other direction.)

Lars and the Real Girl was written by Nancy Oliver whose writing credits include Six Feet Under. That should tell you a lot about the well-drawn flesh and blood characters that drive the story here. In addition, there are several super performances here. Most notably Lars, played by the uber-talented Ryan Gosling (who just picked up a Golden Globe for his work in this movie), Patricia Clarkson, as the therapist everybody needs, and Emily Mortimer, who has, in spades, those damn amazing Brit acting instincts, as Lars' compassionate, pregnant sister-in-law.

Lars is a gentle, quirky little movie. You have be patient with it, as the story, like the tiny mid-Western town in which it unfolds, definitely takes its time. But it takes its time in that good, gradual, cumulative way in which life lessons are learned. Notwithstanding its measured pace, Lars is still a smart film, without being the least bit arch. You walk away thinking,, among other things, don't let the accents fool you, those small town folks have wisdom, which is a better thing than hip wit.

For reasons that are revealed throughout the course of the film, a young man, Lars, has been slowly withdrawing emotionally from his friends and family. One day, he surprises his brother, Gus and his sister-in-law, by introducing his new girlfriend, Bianca, whom he has met on the Internet. Bianca, from Brazil, speaks little English, and is wheelchair bound. She has long brunette hair, favors red lipstick and lots of blue eye-shadow, and has the sexiest figure of any woman in the town.

And, oh, Bianca, is a life-sized plastic doll.

After getting over the shock of realizing that Lars is suffering from a mental illness, Lars' circle brood over the best way to respond to Bianca. In a loving tribute to the best thing that small towns can be, the whole community of neighbors and friends around Lars, decides to patiently support him in his delusion, "as long as he needs it," as expressed by Clarkson's wise doctor. 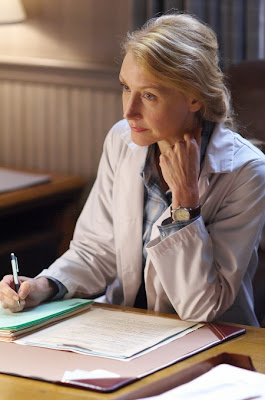 As humble people, the folks in the town are willing to humbly look like fools by welcoming Bianca into their homes, church and even the school board, out of love for one of their own sons.

Larsis a satisfying, charming and compassionate movie that handles its central improbable plot-point with the patient sigh in which so much of the freakishness of modern life has been met in the unweird, measured life of a small town. These people have given up trying to understand the mystery of the human person, especially in the modern age. They have elected to accept people in a kind of "he's not heavy, he's my brother" kind of way. Beautiful script, beautiful story, beautiful direction, performances and complementary production design and cinematography.

I recommend Lars and the Real Girl very highly. Rated PG-13 for a few references to sex toys and Internet creepiness, there really isn't anything else problematic in the film. Sadly, it will probably only make it to major cities, so do watch for it on DVD next year.