A REAL Culture of Life Movie 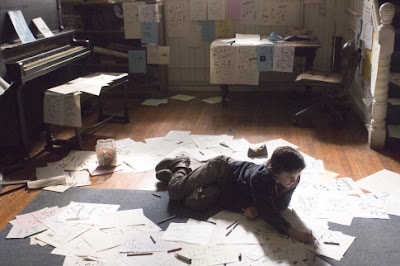 The dialogue is a little lame at points, and the voice-over is over the top, and they have some draggy second act problems, but the story is so good, that you forgive them all of that. August Rush is a fresh, inspiring and spiritual story that leaves you believing that God is in the universe, that people are all basically searching for love, and that the best thing is to be a profound and kind person.

And it makes a compelling, powerful case for the personhood of the unborn child. In a flash, but it's there. And then, there is the whole point of the film which is that parents and children are connected in a mysterious and spiritual way.

And there are wonderful performances here by Freddie Hightower and Keri Russell. And there are at least two absolutely great visual and paradoxical haunting moments!

This movie deserves the support and attentions of all the folks who have been falling at the feet of Bella as a "great pro-life film." Too bad that latter mediocre film sucked all the oxygen out of the cultural room for Catholic, pro-life movies. Too bad August Rush doesn't have the money-grubbing, brainwashed Church of Regnum Christology virally shoving it at everybody in the Church.

But really when you have a good film, you don't need to deceive and blackmail people to get them into the theaters. August Rush has already lapped "THE #1 GREATEST FILM OF ALL TIME!!!!" at the box-office twice over and is holding fourth place. In the end, the truth will out.

Go see August Rush! It will make you glad. And maybe more.