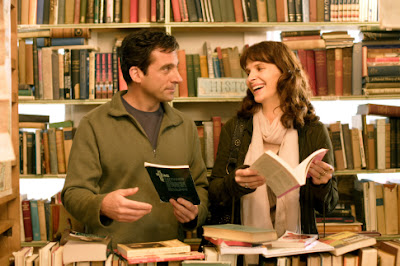 I can't decide if Dan in Real Life is a chick film, or if the Cyrano de Bergerac-style suffering of the male protagonist will translate well for male viewers as well. I'm thinking it will, because for anybody with normal levels of humanity, there is a lot to like in this movie.

But, I have to get one thing out of the way. Even though the movie exteriors are all in the unbelievably gorgeous and cinematic state of Rhode Island (and Providence Plantations), the truth is, there is no family in my home state that would not choke to death amidst the unrelenting progression of clever group activities and quaint games that background the main story here. The big island in Rhode Island has the Indian name Aquidneck, meaning "land of the tight-lipped, narrow-eyed people."

But, anyway, back to the movie... I can't say a whole lot about the story because it has a great first act reversal. I mean, it plays really great because of the gentle way the story has unfolded up to that point. And then, there is very little story after that, so if I told you the set-up, I'd be giving away the main plot point.

But suffice it to say, this is a nice vision of the community that family and extended family can be. Unlike the recent movie The Family Stone, this movie has no political agenda and has almost no cynicism. There are some genuinely funny moments in the film, and while the awkward pain of the main character perhaps dwindles too long in the second act, the family arena here is enjoyable enough to keep the audience connected.

The competent group of actors, led by Steve Carrell, do a very solid job. I was glad to see Carrell in a piece like this, as it shows that he isn't going to take his career exclusively in the wide and easy comedy path trod by comics like Will Ferrell. Carrell is actually quite a good actor, I think, and really makes the audience feel his restrained agony here, without any over the top antics.

The sub-plot of the three daughters starts great but ends up a bit too emotionally manipulative. Still, it is refreshing to see a basically functional parent actually parenting a teenager on the big screen. Again, I think this is all evidence that the Gen Xers as they continue to assume the reins of power, are going to be reshaping a lot of the paradigms of the Sexual Revolution.

There isn't any deeper level to this movie. There isn't any lyrical imagery or cleverness in its structure. But those things would certainly detract from the "Real Life" quality that is in the film's title and reflects its tone. The emotional power of this piece comes from the psychological insight of the main character's dilemma, and how life holds surprises for all of us.

I recommend Dan in Real Life. It's very sweet.