Some friends of mine on the East coast have made an indie and will be screening it around in the next few weeks. It has done very well at film festivals around the world. 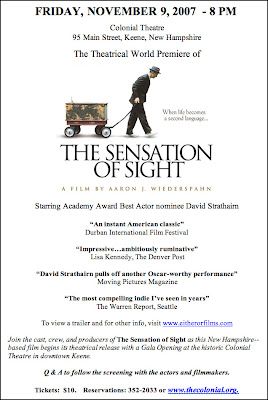 I haven't seen it yet, but the folks behind the project are kindred spirits on the importance of craft and excellence in cinema, so I look forward to seeing it soon.

Here are some of the review blurbs:


“The movie is hauntingly real in its portrayal of the human condition in all its depressed yet redeemable glory. David Strathairn pulls off another Oscar-worthy performance and the film’s ensemble stays with you long after the closing credits…this film is truly an eye-opener.”


“The Sensation of Sight is brutally hypnotic.”


“Completely different from what we see in current American movies…A modern Jim Jarmusch.”


“A very beautiful film…informed by a transcendent sensibility.”


For more information on The Sensation of Sight, go here.