Back to Natural Law School for Michael Clayton 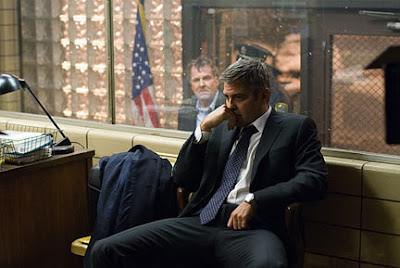 Movie theme: It is possible to be slimy and unprincipled in many little things, and still make a courageous stand for principle when your big moment comes.

This is a stylish, studio star-vehicle of the same nature of most of the projects on which (the beginning to seem really overpaid) George Clooney is building his career. It's well-acted (except for Clooney who never manages to transcend himself) with Tilda Swanson and Tom Wilinson turning in notable efforts. It's well shot and edited and has some pithy dialogue, but in the end, as my director friend noted as we tossed our empty popcorn box into the trash, "What was the point of that? What is the story that they wanted to tell?"

I think it didn't make sense to my friend, because the meaning of the character's choices in the story comes out to the theme I wrote above. And that theme is untrue. So, what was going on in my friend was a search for the movie's choices to add up to something else that would be true. And she couldn't think of anything, because she can add and the character's choices added together, only sensibly end up leading in one direction. Not heroism.

The basic story here is that a slimy lawyer who is a fixer for a huge slimy corporate law firm, gets the task of covering for one of the partners who has flipped his lid while closing a billion dollar lawsuit for a slimy chemical company. While the slimy chemical company sends its head of legal affairs (Swanson) to silence and kill anyone who is trying to blow the whistle on their poisoning of innocent mid-westerners, the lead character, Clayton, is forced to face the truth that he collaborates with people in large corporate law firms and agricultural conglomerates who are slimy. In the end, Clayton violates his attorney-client privilege for a higher good, and completely walks away from his own life and self-interest to do a heroic thing.

I wasn't sure if the subtext of the movie was to say that slimy agricultural companies shouldn't be allowed to employ defense attorneys? Or maybe it was that the attorneys of large conglomerates should just agree to be less clever and vigorous in defending said clients?

But honestly, I think this would have been a moral movie if Clooney had just shaken down the evil conglomerate, and left on a plane for the Bahamas with ten million dollars. See, then, that theme would be that "You are the sum of your choices." Spoken to me years ago by a weathered pagan entertainment attorney, "People who will screw anyone will screw everyone." She followed it up with, "Some people are cheaters. They cheat. Others aren't. They don't." I thought that was a great practical addendum to the Sermon on the Mount.

I don't think the filmmakers here were trying to spread perncious moral lies. (Except in the sense that a whole stratum of society has been forced for ten years or so argue that personal and public morality are unrelated...) I think they were just trying to be all clever and surprising. But making a silk's purse choice out of a life of sow's ear choices isn't surprising. It's impossible. Or in the Aristotelian narrative-need sense, a story in which a slimy character makes a heroic choice is not only not better than real life, it's not even as good as real life. It's less than the real.

And it is true that people can be scared straight. But, Michael Clayton never made me feel like anything that was happening to the main character was really getting to him that much. If his son had been caught in the cross-fire, I maybe would have bought his redemption. But losing his Mercedes just wasn't big enough. 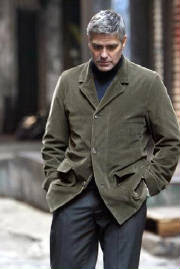 There were several small missteps in the story-telling, but nothing hugely distracting. One grave narrative misstep was expecting that the lead character being gorgeous George Clooney would be enough to establish sympathy with the audience. Uh, no.

There's no point in dwelling too much on this as the audience has already passed the project by. The Academy might keep it alive for Oscar time, but while it is an anti-corporate film, I don't think it is shrill enough to make a big deal about on Oscar night in an election year. There will be much bigger anti-war fish to fry.

On the matter of the audience versus Michael Clayton I find the verdict to be, pass.