As with all the historical sites maintained by the State of Israel, Qumran is clean, well-run and very instructional. If archeology is your thing, you really can't miss the extensive Essene community remains that they have excavated here. 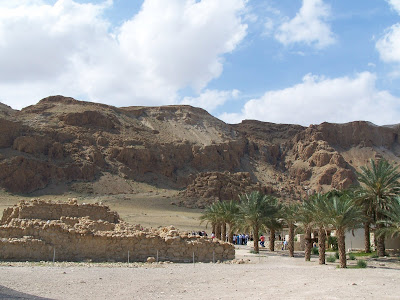 Here is one of the caves in which the shepherd children in the 1950's made one of the greatest finds in modern Biblical archeology. Along with lots of scrolls about "Rules for Living as a Good Essene," the Dead Sea Scrolls contained a copy of every book in the Hebrew Scriptures...except for Esther. 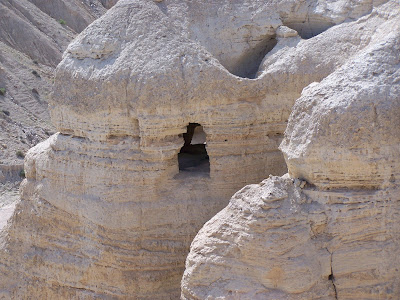 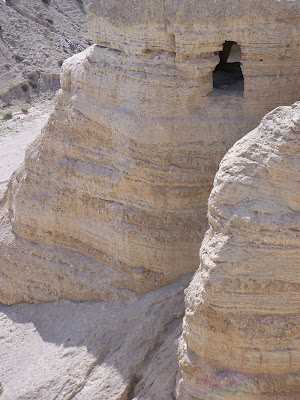 I learned that in one of the caves they found something like 40,000 fragments of parchment. It seemed like an impossible task to try and put them together until some bright soul figured out that that because parchment is animal skin, it would have DNA. So, they used DNA testing to isolate fragments from common parchments and then were able to put the pieces all together.

I also learned that the Essenes would wash seven times a day. But I never was able to learn where they got all the water to do that. There are cisterns and pools everywhere, but it just doesn't rain enough to suppport that many mikvahs. The Dead Sea is too far away to cart that much water. And you wouldn't want to wash in all that greasy salt anyway.

Here are my friends, and our hosts for The Writers Gathering, Gary and Cindy Bayer posing at Qumran. You can see the Dead Sea in the background. 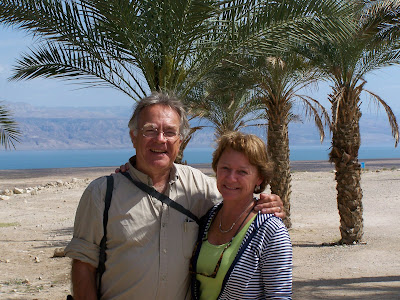