An Oasis in Nazareth 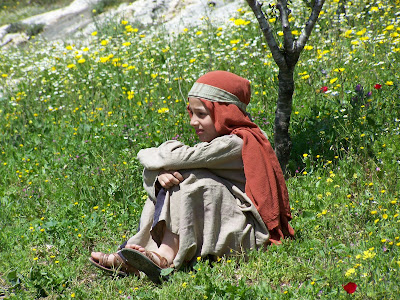 No, that's not who it looks like. Some kind of "the ghost of little boy Jesus past." But it sure looks like it could be an image of the little Son of Man sitting on a hillside in Nazareth, doesn't it? Thank God for Nazareth Village. It was the only spot I saw in Nazareth that is proclaiming despite the oppressively encroaching Muslim presence, "Uh, guys, Jesus Christ lived here!" (We didn't make it to the Church of the Annunciation because it is right downtown and we literally gave up because of the horrible traffic and the fact that there is no parking around the Church.)

Two of the most disappointing daytrips we took during our Holy Land pilgrimage were to Bethlehem and Nazareth. Both of these places - which because of the events that occurred there should be walled off and turned into the most holy of holy places - have actually grown into teeming, ugly urban centers largely populated by indifferent and even hostile to the Gospel non-Christian Arabs. Here is a nicer shot of the center of Nazareth. The environs are really much, much uglier than this photo indicates. 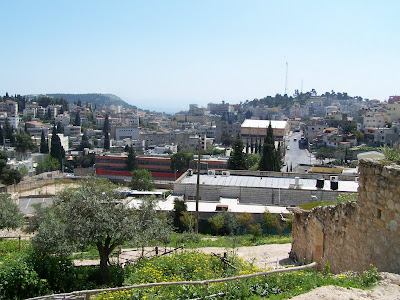 If I was really trying to make a photo journal of the area, it would have a lot more images like this one I snapped of a poster that had been stuck onto the door of a Christian church. 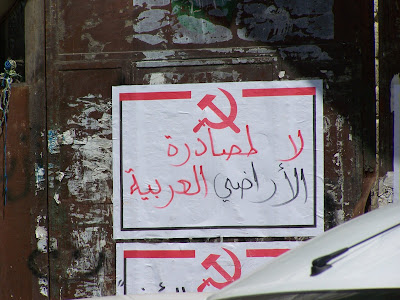 Nazareth, particularly is notorious for its terrible traffic and interfaith tension. We had a long conversation with a Christian Arab from the city who begged us to please write about the sufferings of the Christian Arabs in the Holy Land. He wanted us to tell people about the intimidation and discrimination that his family has gone through from both the Muslims and Orthodox Jews. He was very vehement that we let people know that there are such things as Christian Arabs: "I am not a terrorist! I don't want to kill anybody! This is my home too!" He noted that most of the Christian Arabs are fleeing Nazareth for Canada, Australia and the States. Apparently, Nazareth, has grown from being a tiny town of about 400 people in Jesus' day, to having 80,000 residents today, 80% of whom are Muslims. It's a filthy city with garbage in the streets and lots of shuttered business, with graffiti everywhere and with three of every four structures being half finished cement blocks.

I asked one of our Christian Arab friends there, "Why don't the Muslims finish their houses?"

You really have to see it to understand what I am talking about. Everywhere you go in Israel, you know you are in a Muslim neighborhood when you see that the top floor or floors of houses and businesses are unpainted and windowless - it's ghoulish, like every house has a dead place with hollowed out eyes staring at nothing.

I was told, "If you finish your house here, you have to pay taxes on it. And the Muslims don't want to pay taxes to Israel. So they leave their houses like that." I don't know if this is true or not. But that's what I was told.

Several of the Christians I met in the Holy Land noted that "civic pride" and "respect for the community" are not Muslim virtues. One friend told me, "I've been in lots of Muslim homes where you could eat off the floor. What else do the women have to do most of the day but be in the house which is considered the husband's castle. And most of them live in fear that iof anything is out of place in the house, they will be beaten. So the house better be clean. But the Muslims have no interest in the fact that on the outside their homes look like slum dwellings."

I think the lack of attention to the exterior environment of the homes is just more proof of the flawed theology of Islam. Why do Christian men take pride in their yards? Because they want to make a beautiful environment for their families whom they value and respect. I have noted since I was a child how you could tell the families in our neighborhood who were going through divorces, by the untidiness of the yards. Men who hate their wives often take it out passive aggressively by letting the yard go.

So, in Islam, men are raised to believe that their wives and children are inferior beings. So, why should they plant flowers and mow the lawn and make a nice place for them? It's all about the men in Islam, what they want and what they need. And how many men, really care that much about having a tidy, pretty personal environment? Islamic men are removed from the civilizing effect of women, whom they fear and disdain. (Which is why it is a demonic way of life and not a religion of "peace" in any civilized understanding.) So, the outside of Muslim homes in the Middle East seem to me to be just a broader expression of what we see here in unmarried guys drinking beer on sofas in filthy bachelorpads. Christian guys often get it together when they get married because their wives won't tolerate them being pigs. Muslim guys celebrate their pigginess as being a male perogative.

There is one lovely spot we visited in Nazareth, which is an effort by a group of Christians to create some kind of memorial to the fact that this little town is where the Son of God spent several decades. Called "Nazareth Village," the place is on some land owned by a Catholic hospital in the center of Nazareth. Several years ago, some Christian scholars found on the site a large, first century community wine press and remains of first century terraces for growing grapes. Which means that it was very likely that the Holy Family used this wine press with the other families in the village to store their grapes and make their wine. Here was our guide for the day, standing over the wine press: 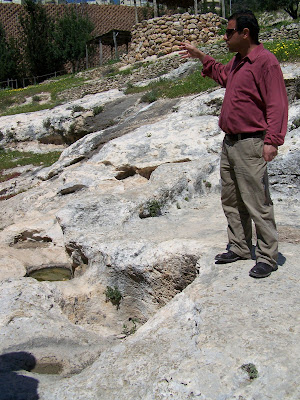 They have a group of very prominent archeologists and scholars involved in the project, and they have endeavored to make it as authentic as possible to the way the village would have looked inthe time of Jesus. Similar to Plymouth Village here in the U.S., Nazareth Village makes use of lots of volunteers all dressed in period clothing and performing first century tasks. Here are some images... 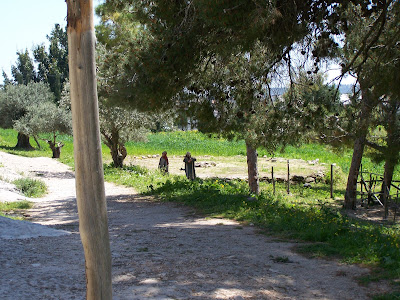 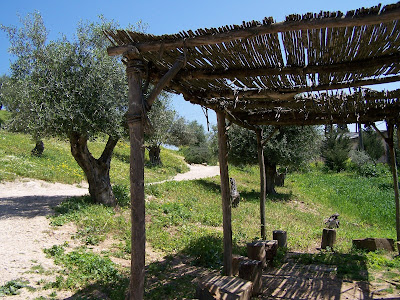 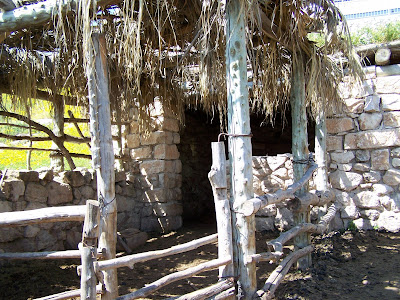 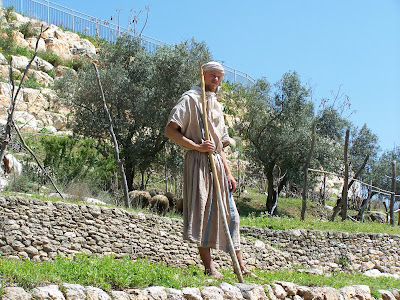 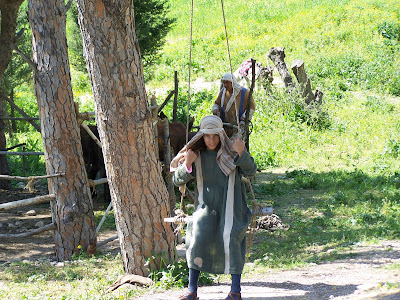 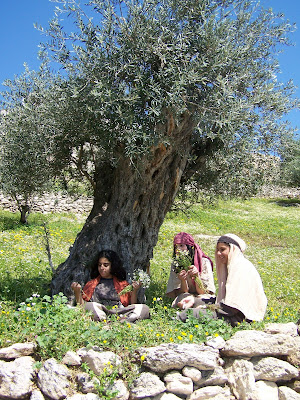 Here is a shot of the vineyard terraces. 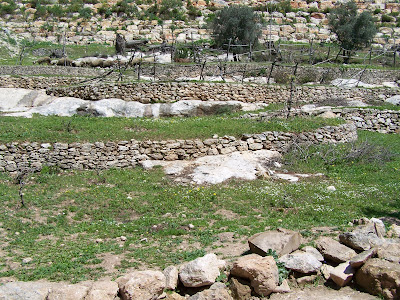 These are pictures of a first century olive press for making olive oil. I learned that virgin olive oil is the first and best oil that comes to the top when you press olives. The people of Jesus time used the virgin oil for eating, and the last skimmings to trim their lamps. 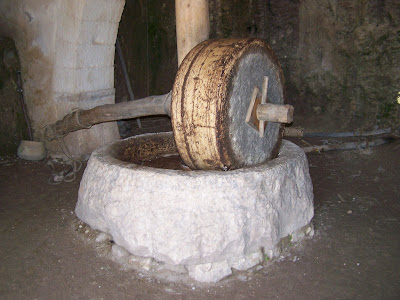 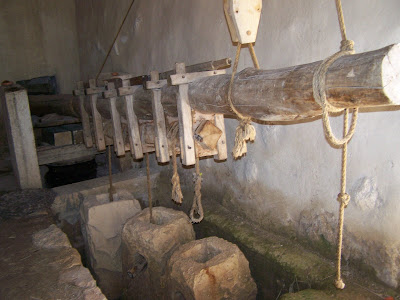 Here's our host, Cindy, sitting in the recreated village synagogue. 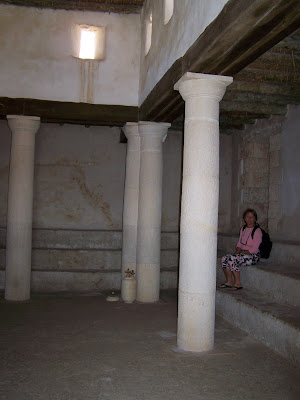 We got to watch a Blessed Mother "stand-in" weaving together thread from lambs wool... 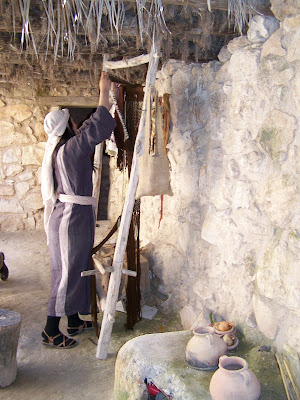 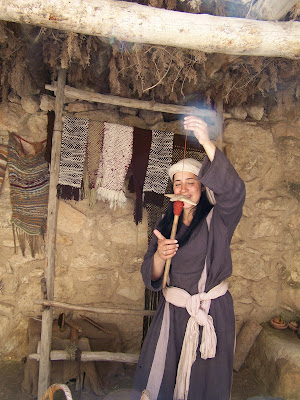 And we saw a St. Joseph wannabe drill a nail using a first century rope drill. 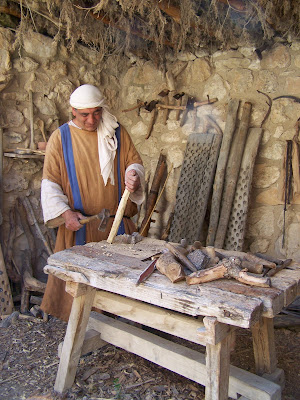 And then they fed us a huge spread with lots of pita bread and bowl and bowls of stuff for dipping. And lamb. But I couldn't eat it because it was a Friday in Lent. Gotto go back some day for that lamb...
It was a cool day.

Interesting site. Thanks for the information on how the Muslims are ruining the Holy Land.