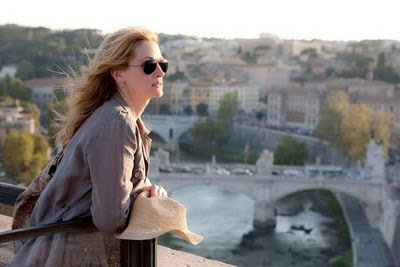 It seems hugely anti-climactic to end my two year movie review silence for the likes of the new Julia Robert's soft-focus orgy Eat, Pray, Love. (Hmmmm... I'm a bit out of practice. Have I just tipped my hand a bit here as to how I felt about the film?)
The main flaw of the piece may proceed from the nature of the source material itself. The movie was preposterously, stylishly, Hollywood big-budgety, and insultingly banal. And while a scriptwriter always has the duty of making the source material better, still, sometimes, that is an impossible task. I mean, this is a book with a title that could be found scrawled as a caveman grunt on a Stone Age wall: "Me man thing. Me eat, do rain dance, have sex." (Call me judgmental, but I'm taking the tack that the "love" and "pray" presented in the movie are largely not. They're kind of pagan perversions of these activities. They did get the "eat" right, though, which has everything to do with the fact that that part of the film was in Italy, where they truly are geniuses with food. All the evidence is to the contrary that India and Bali are geniuses with the Deity and self-donation respectively. )
And, I'm not just complaining that the resolution (I can't bring myself to write "answers") that the movie offers is lame. The very questions that the film proposes to be asking are banal.
Eat, Pray, Love is not a journey of a woman in search of her soul. It's really the travelogue of tax deductions of a New York writer in search of a book.
So, granting that the "big questions" weren't really the preoccupation of anybody making this movie, it remains to ask, "Why?" Hummmmmmmm... What was really driving the making of Eat, Pray, Love? Let me meditate for a minute. Hummmmmmmmmmm.... 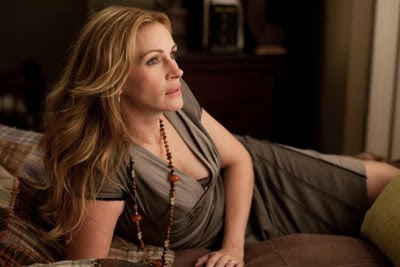 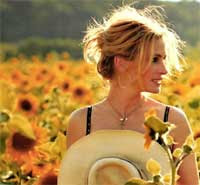 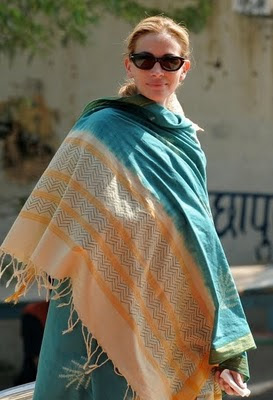 Still thinking here. What were they thinking? Hummmmm...... 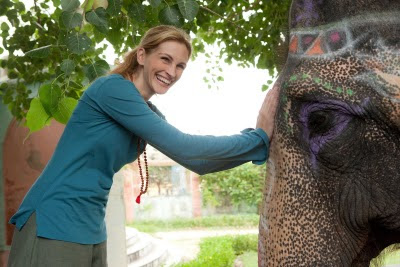 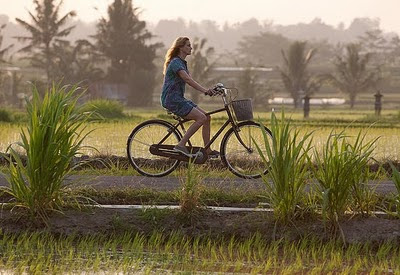 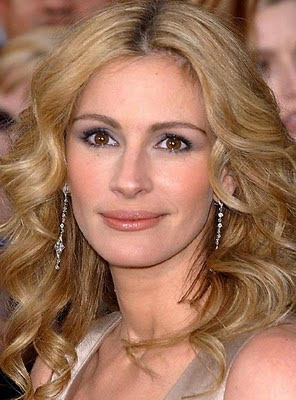 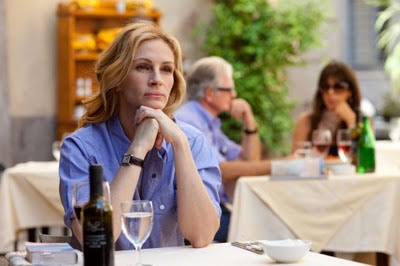 Are you tracking with me?

This movie is possibly the most shameless star vehicle since Julia's self-aggrandizing stint in Ocean's 12 in which she played her goddessness self. She pulled a similar thing in Notting Hill, "I'm just a girl. Standing in front of a boy. Asking for him to love her." waves of intense nausea) but that movie had enough other stengths to salvage the project as a whole. (Please Julia, go to healthy irony school. Or, in other words, the anti-Iraq war crowd called. They want their earnestness back.) It was embarrassing to watch so much Hollywood talent go through this ultimately masturbatory exercise in celebration of the god Celebrity. Particularly painful because of the lack of irony that took in a movie purporting to be about a spiritual quest.

Thoughts that ran through my head while viewing.... "Her poor husband!"......"We have seen this scene already. Three times."....."When people reject the good God, they always make themselves a bad one."....."I never thought of chanting loudly as a way of drowning out the voice of your conscience.".... "She's a succubus."......"Did she just say that awful bad dialogue or was I dozing?"......"Need pasta."....."Something is wrong with a religion that leaves you toothless and unable to use a copy machine."...."Getting your friends to write checks is not a selfless act."....."Her husband should be glad he is rid of her."....

Should I talk about the false religion exemplified in the line from the film, "God is in me AS ME." No, God is in you to draw you to Him. We are not the Godhead. We aren't even headed for losing our identity in the Godhead because he loves us as individuals. When Oprah interviewed Julia for the movie she asked her, "So, what's your favorite food? What's your favorite pray?" as though every kind of prayer is fine as long as it makes you feel, what? Heard? Validated? Sated - the way the movie characters sate themselves with food and sex? My dark side had me imagining Julia answering, "Oh, well, I like to torture little animals while playing the soundtrack to Tommy." And Oprah would surely have responded with her wide eyes, "And does that work for you?"

See, your "favorite pray" is not neutral. It is good if it leads you to lay down your life for your friends. It is bad if it leads you to "forgive yourself" for abandoning your son, or your husband, or if it leads you to justify fornicating with a virtual stranger, or into concluding that basically you can do whatever you need to do as long as it floats your boat. God, please tell me I will live to see this Boomer lie scorned in the popular culture!

This movie is plodding, repetitive, and anti-climactic. There is an artificial inciting incident - the main character's festering narcissism erupts and makes her regurgitate her marriage vows - there is no character establishment - they seemd to think we woud be on the character's side because she is Julia...note to producers: ref. Mary Riley - there are no sub plots - there is no imagery - there is no suspense - there is nothing surprising - there is no ending, the audience torture just stops. Thank God, but really, inexcusable.