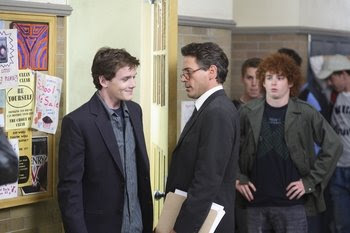 Okay, Baby Boomers, this is the moment when you should reach for a barf bag. Or just skip this review and the movie it's about.

I seem to recall predicting about five years ago, that as soon as Gen Xers came of age, they were going to start telling one basic story. Their story: Dysfunctional parent-child relationships. And they will be filled with confusion about everything that matters except for a scathing indictment of Baby Boomer materialism and narcissism. The younger generation is not confused about those latter things being bad.

We've already logged a few of these movies like Garden State, Pieces of April, The Nanny Diaries and Devil Wears Prada (both based on Gen X novels). Those of us who watch student films have seen scores more than our share. Even the last Die Hard had a sub plot in which McClane's teen-aged daughter was filled with resentment towards her mostly AWOL dad.

And we are nowhere near the end of these. Figure even just half of Gen Xers are nursing this kind of resentment. And every one of them who ends up in Hollywood is going to be attracted to stories that serve as a kind of "hurts-so-good" scratching at an itch that will never quite heal in them. As an old nun told me once, "There are certain things that little kids need from Mommy and Daddy. When they don't get them, they spend the rest of their lives searching for them.

Okay, so Charlie Bartlett now in theaters is a not quite coming of age story about a young man with great intelligence, potential and empathy, who has had the misfortune to be born to two selfish narcissistic Baby Boomers. His father is in prison for embezzlement or some other such greedy materialistic crime. His mother is a loopy, immature alcoholic who loves her son in her own way - unfortunately a way that means she has turned over the role of parenting to him, while she enjoys her toys and games. In a real caustic slam at the Baby Boomer's drug as remedy culture, Charlie is put on a pharmacy's worth of behavior altering drugs from Ritalin to Vicodin and back. Charlie ends up compassionately setting himself up as a therapist to the other kids at high school, and dealing out to them the pharmaceuticals his various uncaring therapists have prescribed for him.

I actually enjoyed a lot of this movie principally because the guy who plays the lead, Anton Yelchin, was just a delight to watch. He plays Charlie as accepting his tragic lot in life without resentment and with a boatload of disarming good-heartedness. He loves his ridiculous mother, even as he can't deny that she has really screwed him up.

I find this quality very typical of a lot of the younger generation. I once attended a pro-life event at UCLA hosted by Feminists for Life. Patricia Heaton was there and started off the evening by asking the crowd of mostly young women how many of them considered themselves pro-life. Fully two thirds of the packed auditorium raised their hands. When Patty asked them why they are pro-life, one raised her hand and responded in very Juno-speak, "Well, I don't want to judge my mother, because she made the choice that she felt she had to. But, my Mom aborted two of my siblings, and I've spent my whole life growing up, wondering if she was glad she kept me, and whether I was worth being the one who got to live. I just don't want those kind of thoughts for my kids." I sat in the back and watched two-thirds of the two-thirds nodding their heads in assent.

So, the most functional of the younger Generation have a definite resoluteness rather than simmering resentment. They don't want to be their parents, because they have grown up having to often parent their parents and they instinctively know it wasn't right - even as they feel compassion for the tragedy of their parents' lives. And the Boomers thought it was hard growing up with Vietnam and disco music!

There are some great lines in Charlie Bartlett, and a lot of really cliched ones. The other performances are solid, with Hope Davis doing a great turn as Charlie's pathetic mother. The actress actually makes the character sympathetic, which is incredible considering the fact that she is a mostly drunk selfish person. Robert Downey, Jr. doesn't have a whole lot to do here, and it is kind of funny seeing him in a role in which he is having to be stern and unforgiving of a kid who is dealing out drugs. Cause, you know...

The story here doesn't quite pay off. As I said, it isn't really a true coming of age story in the way that Gen X stories of their lives - like Garden State and Pieces of April never quite make it to grown-upness. The younger folks among us are pretty cynical about ever overcoming the wounds of their childhood. This is mainly derived not from the fact that their wounds are so deep - because in the span of human existence, people have endured much worse childhood conditions - but rather because Gen Xers have little or no self-discipline, and they don't have the confidence that they will ever really be able to rouse themselves past their strong inclinations. Gen X stories get to a place of "I can cope" as opposed to "I can be healed" or even the "I can be anything I want" which was the subtext resolution of coming of age stories in past generations.

Some critics are waxing horrified that the movie would make a comedy of teenagers dealing prescription drugs to other kids. But I thought that the Ritalin generation has a right to suck some caustic irony out of the fact that they were put on drugs so that their normal childhood flailing around would not be annoying to their Boomer parents. Come on, 60's Generation, did you really think you were going to get away with putting your kids on drugs?

The movie is rated R for some non-graphic violence and sexuality, and some crassness and language that is consistent with its urban public high school backdrop. I found it entertaining and actually charming - especially the scenes in which Charlie is playing therapists to his fellow teenagers who are all starving for adult attention. The movie is a bit smug and nasty to older people, but, like I said, we're going to see a lot more of that at the theaters in coming years. So we might as well just go with it and find a way to enjoy it. I'm going to recommend Charlie Bartlett.