A New Renaissance One Church at a Time 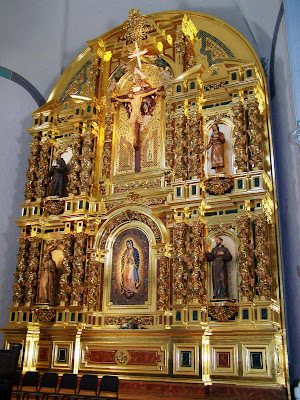 I spent yesterday making a mini-pilgrimage to the Mission at San Juan Capistrano which is about an hour's drive south of Los Angeles. I talked my friend Karen of television writing into coming, and my friend Bernadette of Magis into hanging out with us for the afternoon. I wanted Karen to see the new altarpiece that they have recently installed into the Basilica church. (Karen also has come pictures up at her blog.)

The altarpiece was created in Madrid, by one of the only companies that can still do this kind of artwork. (Apparently they have been passing down the skills in one family for 450 years.) The altarpiece, a bargain at $3 million, is forty feet high and 25 feet wide. It is part of a comprehensive beauty facelift in which the pastor has replaced the altar, pulpit, altarpiece and next week, the tabernacle. I love that this is happening somewhere in Christendom. Somebody is actually spending money to make a place of worship beautiful - you know, as opposed to "inclusive", "functional", "simplified" or "IMPORTANT" (ie. political as in lame acrhitectural statements that everybody hates).

The altarpiece in Capistrano gets its unearthly gleam from the fact that it is plated with 24.5 carat gold. We saw a lot of this kind of thing in Spain, but they were all covered with 500 years of soot and darkened candle wax. This thing in Capistrano makes a good case for a nice cleaning of half the churches of Europe. (Somebody, get on that, will you?)

Exquisite in its craft and detail, the altarpiece is the kind of thing I haven't seen commissioned in a Catholic Church for my whole artistically wretched post-Vatican II iconoclasm period life. Kudos go to the pastor of the Mission Basilica, providentially named Fr. Art. Fr. Art told us that the installation of the new altarpiece has transformed the parish. I understand why. You sit there during the liturgy and stare up and something in you moves towards belief. 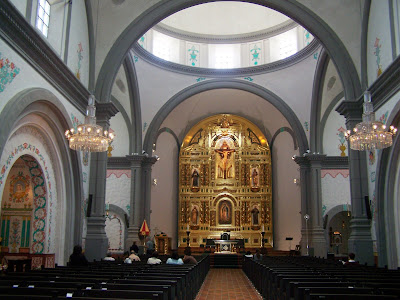 Anybody who lives in So Cal, it's time to make a pilgrimage to the San Juan Capistrano Mission. If you don't live around here, plan on taking your next vacation somewhere close to Orange County. Go here for the Mission's web site and schedule of Masses.

Here are some shots from around the basilica.

The crucifix over the altar. 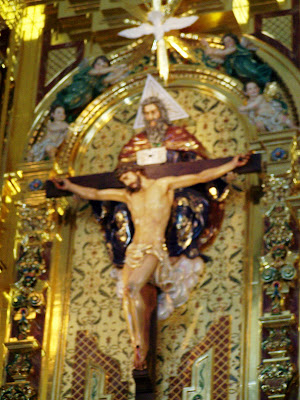 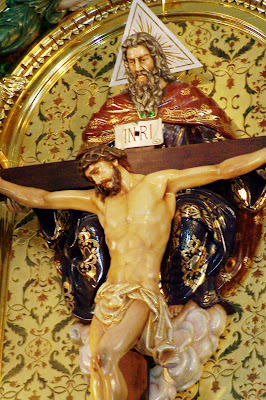 There are four saint statues on the altarpiece, that have significance to the Mission. St. Kateri Tekakwitha, called the Lily of the Mohawks for her works of charity after her conversion to Christianity, is also the first Native American saint. 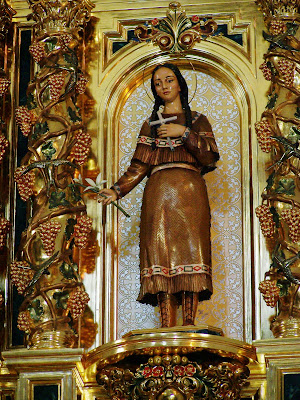 St. Francis is there because all of the California missions - and consequently all the principal cities of the state - were established by Franciscan missionaries. 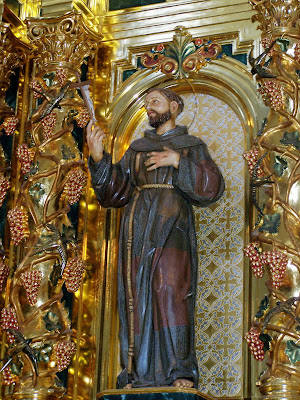 St. Joseph is there because every year, the Mission relives the miracle of the return of the swallows on the Feast of St. Joseph, March 19. 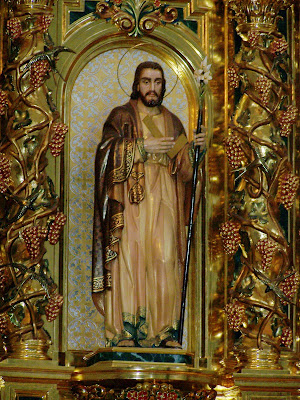 And then there is St. Junipero Serra, the Franciscan who founded the principal missions. He walked more than 35,000 miles in his life up and down the coast and back to Mexico City several times to get the Spanish authorities to do the right thing by way of protecting the native peoples. 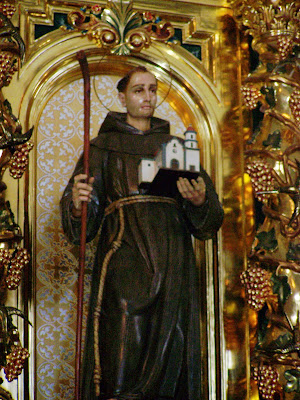 Of course, in the middle of the piece just under the Trinity there is a lovely image of Our Lady of Guadalupe, the Patroness of the Americas. 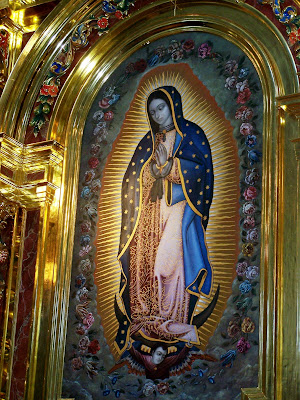 Here's a shot of the detail of the framing that covers the altarpiece. The grape vines are a Eucharistic symbol. The swallows are there because of the annual miracle of the swallows for which the Mission is famous. 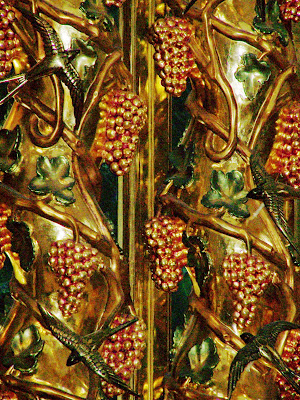 The pulpit and altar. The altar was designed by the pastor, Fr. Art. 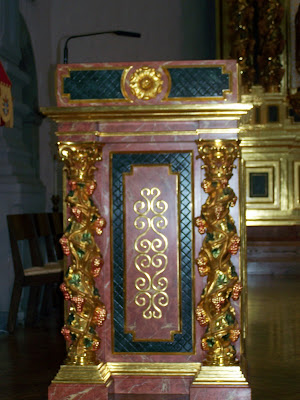 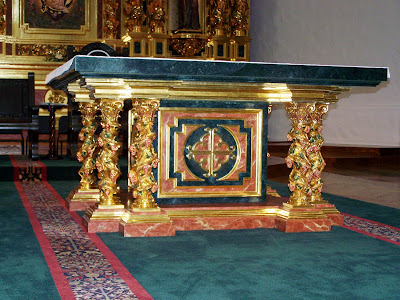 The only thing that seems to me to be a flaw in the Basilica is the brightly colored, but badly executed painted designs on all the walls. They tell me that the art is in the style of the early mission churches. But, it seems to me that the reason they put those ugly things on the walls back in the mission days, was because they didn't have any decent artists around baby California in the 17th century. The designs look weirdly Pennsylvania Dutch to me. 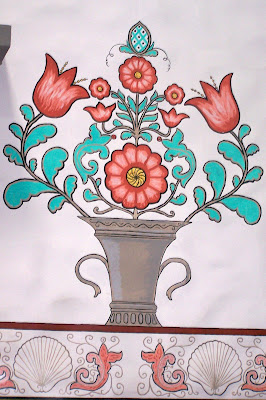 And the portraits are just badly done. They aren't a good match for the splendor of the altar piece, and hopefully, everybody will figure that out eventually. 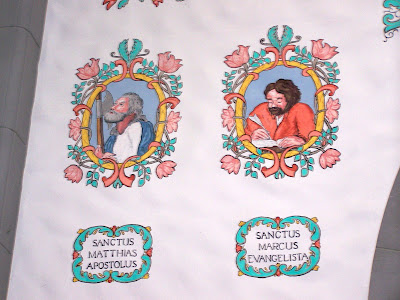 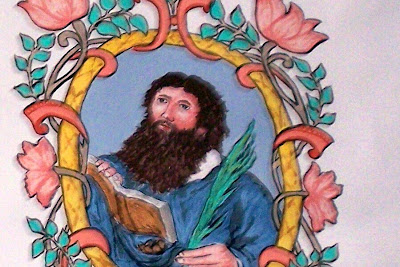 But overall, the Basilica gets four stars. It's worth a pilgrimage.