PICTURES FROM SPAIN...BECAUSE I CAN 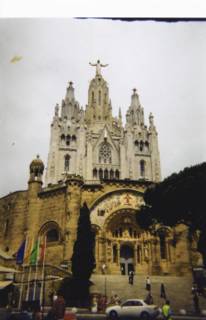 Here's Holy Family Church on a mountain overlooking Barcelona. This church was totally funded by the local people. It's lovely inside. Modern good. 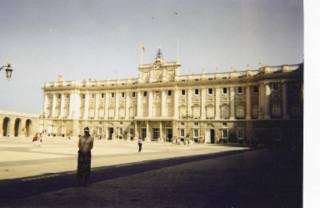 And here's my buddy Laura looking shady in front of the Palace de Real in Madrid. Amazing art all through out. Really drove home the awesome power of Spain in its heyday. The best part of the palace was the 1000 square feet Oriental carpets...I guess if you can't have hard-wood, it's the next best thing. 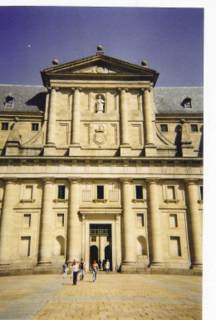 The little white speck is Laura standing in the back door of the monastery, palace, library and crypt called El Escorial. So much I could say about this place. Honestly, one of the most astounding places I have ever been. Just when you thought you had seen the last stunningly amazing room, there was another hallway with five more. (Yes, I know I am over-using adjectives here....But they were made for El Escorial.) In the end, the place was a strong faith affirmation for me. How much more people used to believe, than we do now! Imagine a head of state, building a monastery just to make sure that his family would get prayers.... This place is halfway between Avila and Madrid. If you get to Spain it's a must see. Heck, it's a must see even if you aren't going to Spain. Go, just to see this place. 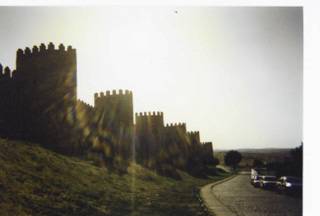 A shot of the wall that circles the old city of Avila. Laura and I spent a half a day trudging around every corner of the old city, in the heat, trying to find the Monastery of St. Teresa. I think it is called "Incarnacion." Well, we would trudge for about twenty minutes, and then stop and gasp to some friendly Spaniard, "Incarnacion?" They would shake their heads, point, and rattle off directions in speed-of-light Spanish. We would say "Gracias," and then trudge off again futilely. One detour did take us to the crumbling little church in which the saint, I will always think of as "Big T", was baptized. Finally, we figured out that the monastry is OUTSIDE the walls. We got there just as they were closing for the night, but we did get to step inside the confessional in which John of the Cross used to hear the nuns confessions. It was an odd end to an odd day. Good, but undeniably odd. 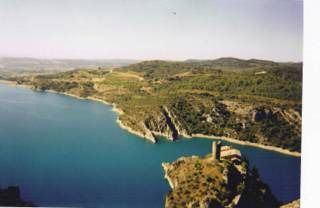 Gorgeous Torreciudad, a Marian shrine somewhere between Madrid and Barcelona. This shot is actually taken from the cool new shrine and conference center on the over-looking hill. The tower and building in the bottom right are the original Medieval tower and Church. It was originally some kind of miracle about Mary interceding to hold back the Religion of Peace from annilhating all the infidels in the region. Hmmm...We'll take one of those, please... 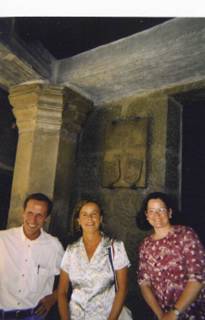 Our kind guides, Alvaro and Cristina, with friend Pat, standing by a rare plaque on a saint's house in Barbastro. The Spanish don't seem to get the idea of plaques. As Cristina noted to me with a shrug, "We would have to have a plaque on every building on every corner. (Damn Europeans with their smug overload of historical significance.)

I was searching for Elvis and somehow ended up in your blog, but you know I'm sure I saw Elvis in the supermarket yesterday.

No honest really, he was right there in front of me, next to the steaks singing "Love me Tender".

He said to me (his lip was only slightly curled) "Boy, you need to get yourself a shiny, new plasmatv to go with that blue suede sofa of yours.

But Elvis said I, In the Ghetto nobody has a plasma tv .

Dude I'm All Shook Up said Elvis. I think I'll have me another cheeseburger then I'm gonna go home and ask Michael Jackson to come round and watch that waaaay cool surfing scene in Apocalypse Now on my new plasma tv .

And then he just walked out of the supermarket singing. . .

"You give me love and consolation,
You give me strength to carry on "

I'm new to blogging and I like you're one

Come and check it out if you get time :-)

This is an interesting blog ! I'm bookmarkarkimg you and will re-visit :o)

Come and check it out if you get time :-)

I noticed you have adsense ads on your page, Would you like to increase your earnings from them, Free and Legitimate way to make your clicks increase.
Come see my Blogger blog and it will tell you more.

Shop at your favorite stores 24 hours a day. Why go to the mall when you can shop online and avoid the traffic

Wow This is Deep..I know all of this sounds good but if you really want to change yourself or someone important to you. If you need ideas in your life. If You can say no to all this ideas...

I am changing the way I live today ..Think it and believe it.. You can Change Your Life and Start Living Your Dreams Today..http://www.spiritualideas.com

This new, Internet Shopping Mall has the hottest . Well over ONE MILLION products in all.

Think about it. An electric bicycle will add sparkle and zest to your day. Just get out and enjoy...zest

What in the world is the world...Some people believe that to create is great but build is like changing the past forever... If you want to create a beautiful home Visit contractors and you can see what a little change can create..

Hi, As part of a sports related degree, I'm doing some research into some Cycling related search 'keywords' e.g. 'bicycle'. I've used bicycle to contact people but I need more input. Any suggestions on where to look?
Thnx