Next Friday marks the beginning of the end of the great and wondrous Battlestar Galactica (2003). It's really all I can think about! (You know, in between working on a script about Fatima, and teaching cinema to undergrads, and watching award screeners, and buying a car, and....well, you get it.) I'm actually kind of weirdly dreading the last twelve or so hours of the series. I really thought half of season three was kind of a let down (in terms of depth of insight), and I found the first half of season four to be full of sound and fury, but not signifying very much. There seemed to be alot of running around yelling and crying and firing weapons, but not a lot of real delving into the many questions that the series has raised in its chronologically meandering run. They've kept us waiting a year to finish the story. That will be judged a really nasty thing to have done if the show doesn't pay off.

I'm not sure the writers haven't dug themselves into a pit too deep to be filled in in only twelve more hours. For the record, I was thinking to write down the questions that I would need to see answered to feel satisfied. Any of you other BSG enlightened feel free to chime in in the comments any others. The rest of you, go rent the mini-series.

1) Is there anything sacred about human life? One day during the WGA strike last winter, I found myself walking next to one of the BSG writers. I started talking to her about the show and at one point she stopped me and said, "So, you are assuming that there is something sacred about human life?" To which I said, "Uh, well, yeah." She laughed and said, "The show doesn't have any such presumption." Or words to that effect.

Now, for me, Battlestar Galactica would be ultimately kind of, you know, disgusting, if having been so insightful and provocative about some things (like suicide bombing, and the case for stealing elections in some situations, and the need sometimes to suppress civil liberties in the name of a greater good) could get the big, huge question of the sanctity of human life wrong. If the show shrugs off that human beings are just another kind of machine/material being, then it seems to me the whole journey of the show will be wrecked and it will not then be something that I would ever want to return to as a viewer. Because who will ever want to revisit the toils of a bunch of things who weren't really "alive" but were rather delusional piles of matter?

The only way I think such a conclusion to the show would be moral - because it is, after all, a lie, would be if the show was meant to shock us into horror at the imaginary idea of a human world in which all of the humans were actually just material beings without any innate dignity which comes from their spiritual potential. But I think an ending like that would be a cop-out and very disagreeable to the audience. It would be bad storytelling, I think, for reasons that have to do with what the needs of the audience are in the area of story endings.

The last thing the show might do is not attempt to answer the question at all, but leave it out there. That too would be a bad storytelling choice. A storyteller needs to have a point of view, and when you are talking this, the central issue of the whole drama for four years, the storytellers just can't back away and say, "Gotcha! Who's to say?" That would be really annoying to the audience. In a bad way.

2) "We only asked how to survive, but never if we deserved to survive." This was the heart of Bill Adama's speech in the opening minutes of the mini-series, and more and more, I think it too is one of the points of the show. Why are we all fighting so hard to stay on the world stage - 'lighting fools the way to dusty death, a tale told too often by idiots...'? Oughtn't we have to do something as a people to justify our survival?

Of course, from the Creator's standpoint, all we have to do is fulfill our nature. We don't need to do or make something as though God needed it. But from our standpoint we should be moving collectively towards becoming a kind of being that makes the cosmos more beautiful. More intelligent/profound/thoughtful. More loving/self-sacrificing/life-giving. More grateful. More open. Which are all the opposite of a planet of warring, self-indulgent, narcissists.

I would be okay if the show didn't really venture a thorough opinion on this one, because it's too big for a TV show, but I'd like to see the last half a season raise it again as kind of the point of the whole series.

Then, along with the revelation of the last cylon, and what happened to earth, and where they should all go now, and where is the cylon home world, and who is running the show there, there are the more mundane story problems that need to be resolved...

3) How did Baltar survive the original nuclear attack, when at the start of every episode we see the windows of his house getting exploded in on him?

4) What the heck was Head 6 for Baltar? Was he insane the whole time she was appearing to him, or what force was generating her in his brain?

5) Why isn't Nicky as special as Hera if he was the product of a cylon and a human too? 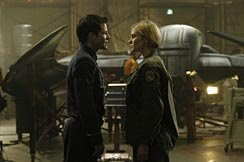 6) What is Kara Thrace now? (And all the million Kara questions - why her? how did she get her destiny? where was she when she thought she went to earth? )

7) How could Sam be one of the Final Five - because he had no possibility of surviving on Caprica? It was just a fluke Kara met him and fell for him and then went back to get him. (This one really bothers me inordinately as a story problem. I hate hate hate flukes as key story beats.)

8) Where the heck do the cylon hybrids come from?

9) How could Tigh and Caprica have a baby? And if they can, then how come all the cylons aren't just having babies with each other?

10) What made the music flow through Galactica that only the final four could hear? (Maybe Galactica is the Final Cylon? That would be a terrible thing to do...)

11) Who built/programmed the skin job cylons? It seems like the Centurion models just aren't bright enough.

That's twelve questions for about twelve hours of television. They have a lot to do. They also better give us satisfaction in several of the relationships in the show - most notably between Kara and Lee. Enough with all the angst.

Anything else I'm missing?

P.S. I just found an interview with Katee Sackhoff ("Starbuck") from the Wall Street Journal on-line which has some fodder for us about the substance of the final episodes. Katee generally says things that are worth reading into. (There's also something oddly refreshing about an actress who can acknowledge without fanfare that she's 29.) I'm glad to see the part about the point of the show being about "the human condition." That's always been the main draw for me, and that's why I guess I found so much of Season 3 such a let down. It was as if they forgot what the show was about.

The thing about the ending being sad doesn't do a lot for me. As a fan of the show's intelligence, I want the resolution to be smart, not emotionally manipulative.


WSJ: Your co-star James Callis said of the show's finale: "I think if Adolf Hitler were back, he'd be crying in his handkerchief." How would you describe it?

Ms. Sackhoff: It's sad. It's extremely emotional. A lot of the tears you'll see are real. I'll leave it at that.

WSJ: You can't give away anything more than that?

Ms. Sackhoff: The remaining episodes are wrapping up every single thing that has ever happened on "Battlestar." Because the show is considered science fiction, we have been able to talk about issues in a post-9/11 world that other shows have had to tiptoe around. We could really play out the reality of those emotions and circumstances. It will break your heart.

WSJ: The most recent episode of "Battlestar" (which aired in June) ended with a cliffhanger -- the crew discovered that the planet they had spent three and a half seasons trying to find, Earth, was a nuclear wasteland. Since, there has been a speculative frenzy among fans.

Ms. Sackhoff: ...What's interesting about the show, and what it's always tried to convey, is that the literal issues and questions that motivate the story -- who is the final cylon? will we get to Earth? -- is not what the show was ever really about. [Creator] Ron Moore had this much more profound global concept. You find out really early [in the final episodes] what everyone is. In my opinion, Ron and the writers really just want you to focus on what the show's really about, which is the human condition.