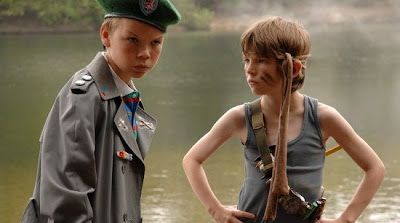 I went to see this film through a sly diversionary tactic with my movie-buddy Sean, who really thought we were going to see Speed Racer. Somewhere between the parking garage and the theater lobby, I took an intractable stance that could be sumarised as, (sing it with me...) "No, Speed Racer. No Speed Racer. No Speed Racer, no!" I'm just not the right audience for movies that want to be pre-teen video games.

Anyway, Son of Rambow has several charms and the consensus of our group of friends was that it was two hours of enjoyable family entertainment with some genuinely funny moments and a good humane tone and worldview. The two boys who play the leads are more than competent (although the one who plays Will is the much stronger actor) and the script gives them both clear arcs that are played out in mostly motivated, intelligible, visual and believable choices. All good.

The basic story here revolves around a fatherless boy named Will who is being raised in a kind of British Amish community. (...which I suspect they really don't have in Britain, but the filmmakers needed for their story so they invented it.) Will has a vivid imagination although his family's religion has made him a freakish outcast from the other kids at his school. He meets up with the school miscreant, Lee Carter, who is also fatherless - and motherless - and being raised by his uncaring older brother. Lee recruits Will to be the stunt man in a movie he's making for one of those talent search TV shows, and the project bonds the two boys, and then the movie is off into a nice coming of age comedy.

With a teeny-tiny budget, the film also reveals scores of flaws in the writing and story area. (It has serious second act problems that I think come down to the fact that the story is missing an antagonist...hearest thou me O screenwriting students of mine?...) The movie is at its weakest in its caricature of the religious sect of which Will's family is a part. But, because the film is so caricaturish with pretty much every group in the movie, I found the "religious people are mean and clueless" theme pretty harmless. All the supporting players are also weakly drawn, but it is acceptable because the story really accepts the POV of the two boys.

But in the end, Son of Rambow has a lot of heart, and there are some genuine laughs that come out of the escalation of the movie project as the whole school of British kids gets involved. On some level this movie is about the magic of movies and the thrill of movie-making, it is about abandoned children and their longing for family, it is about the friendship between young boys, and it is about imagination and delight in childhood.


I basically enjoyed Son of Rambow and I am going to recommend it for pre-teens and above.