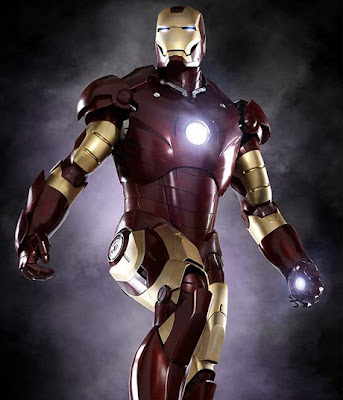 I really didn't want to review the number one movie in America, Iron Man because it isn't exactly COTM's kind of thing. That is, while it is slightly more intelligent than the Fantastic Four series, it still doesn't have much about it by way of benchmark cultural signifiers. Or, as all the kids are saying these days, "This chicken is no Battlestar Galactica."

But, then I found the above cool picture out there in cyberspace, and decided I wanted it on my blog.

And, indeed, the coolest things about Iron Man are the look of the suit, and how it comes together using all the futuristic computer devices, robots and holograms. The CGI here is 90% of the fun, and that's okay, because a whole lot of Hollywood history can be summed up in the phrase, "Ooooh, gobal audience, lookee what we can do?!" When I was in film school, one of my professors had actually named this constituent part of Hollywood's offerings, "the cinema of attractions."

So, Iron man is a fun film to watch. The only un-fun part of the film was the ideological contortions of the filmmakers trying to make a statement in an election year about evil weapons coming from greedy corporations and how it would be better if nobody made any weapons at all ever. (To which I reply by throwing my voice out to Osama Bin Laden wherever he is, "Fine. You put your AK-47 down first.") But the film really doesn't seem to know what they wanted to say about big gun control, so the message is fortunately impotently incoherent.

I absolutely enjoyed seeing the Islamo-fascists in Afghanistan portrayed as themselves - bloodthirsty, cave-dwelling filthy, but not real bright, kidnappers and killers who here are working in an unprincipled way in league with greedy corporate Western arms producers. I loved seeing these same evil followers of Islam attacking and murdering their own people. I found these portrayals fresh and heart-warming. 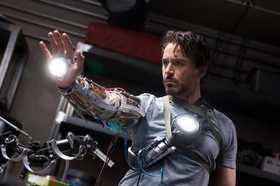 Robert Downey, Jr. is clearly back and does a good job in fleshing out an internal arc for the hero, billionaire genius Tony Stark, despite the fact that he doesn't get very much help in this from the screenplay. With way too much innate movie star glamor, Gweneth Paltrow was miscast in the role of Stark's personal assistant, but fortunately, she really has very little to do in the movie so she doesn't distract much.

It seemed to me that Iron Man is very much a superhero for a materialistic age. He hasn't any magic about him. All just machinery and computer gimmicks. But whatever.

The overlords here at COTM hereby proclaim Iron Man a fun diversion and harmlessly nonsubstantial for those who like that sort of thing.