"O BSG, where is thy victory?" 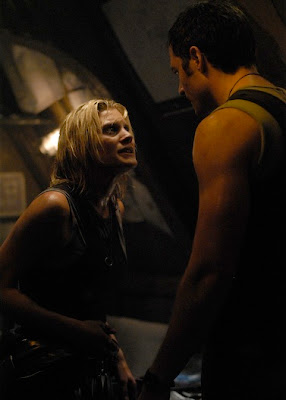 I'm getting a bit concerned about my beloved Battlestar Galactica. I'm finding Season 4 so dark, that I'm thinking it is going to be hard for there to be an ending that would leave the audience with a sense of hope and victory. It would be a hubristic dramatic blunder to lead the audience through four seasons of wandering in the extra-terrestial desert, only to have none of our beloved characters survive to see the promised land, earth, or to have the human race be so scarred and debased in their journey that they aren't worth saving at the end for the audience, anyway.

(It has occurred to me at several points in the show's progress that the whole series is trying to answer the musing posed by Commander Adama in the opening mini-series, "We only ever asked how to survive, but not if we had a right to survive." Maybe the show is going to conclude that human beings don't have any special right to survive? That would be a REAL dramatic blunder because it is a lie that the audience will reject. And it would be a shame if the wonder of BSG came down at the end to a well-crafted lie.)

I keep reading interviews with the show's writers in which they seem very gleeful about how dark and twisted the show is going to go in this last season. Well, that's fine, as long as there is a victory at the end...and the victory has to be greater than all the suffering that has purchased it. That's what makes a good, and moral, story. (At least the kind of story that the series has been seeming to be telling up to now - a hero's journey story.) It doesn't add anything narratively to be dark just because you can, or to leave the audience feeling nauseas and grief-stricken because their beloved characters have been tortured to no meaningful end. It isn't darkness that makes us love BSG, but rather the characters fundamental heroism in spite of their dark impulses. I'm just afraid that we aren't going to care for these people by the time they ever do dock on earth...and that will mean that no one will want to watch reruns of BSG once they know the end. It will be too much of a depressing let down to go through again. (I mean really, who would watch Star Wars again if the Emporer had succeeded in the end in frying Luke to death and subduing the rebellion?)

Also, I really hate what they've done to Kara in the whole Demetrius sequence. It seems to me to be somewhat bad storytelling because it doesn't seem to fit at all with the peace that the character acquired in facing her past in the climactic episode "Maelstrom." Or what about the quietly resolute Kara who parted with Lee three episodes ago? The show needed to give us a moment in which we saw her revert....but it would still be a misstep dramatically because of how powerful her resolution was in "Maelstrom." Who wants to be saved by a nasty, raving maniac, anyway? This Kara won't be able to enjoy earth when at last she finds it because she has all but lost her humanity. Maybe that's the point, but I don't think it is going to be the stuff of beloved shows that audiences will take to their hearts and watch again and again. You can kill some of the supporting characters some of the time. And some of the main characters some of the time. But you have to be very careful about killing your most beloved character at any time.

And again I am slightly concerned that the show has lost its geopolitical smartness so far in Season 4. There just isn't that larger world metaphor stuff going on that made the show feel so daring. But there is still time.