There Will Be Bigotry 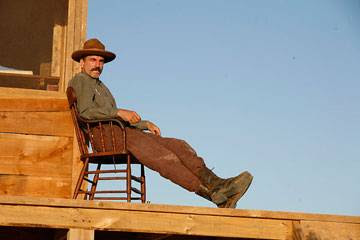 There Will Be The Most Self-Indulgent Film-Making experience of the Year.

There Will Be Caricatures Instead of Characters.

There Will Be Far Too Few Plot Points.

There Will Be Too Many Minutes Repeating the Same Ideas Which Aren't So Profound Anyway.

There Will Be Several Unmotivated Character Choices in Unfortunately Really Big Moments.

There Will be Embarrassingly Bad Dialogue.

There Will Be Headache Inducing Sound Design.

There Will Be a Director Who Totally Lost Control of His Lead Actor and Let Him Act Like a Clown Instead of a Person.

There Will Be A Distorted Agenda About Religion and Capitalism Being the Most Corrupting Influences in Human Life.

There Will Be Religious Bigotry.

[In fact] There Will Be A Blasphemous, Orgiastic, Christian-Hating Scene in Which The Archetypal Believer Is Established as A Greedy Hypocrite, Liar, and Idiot and Then Have His Idiotic, Hypocritcal, Greedy Lying Head Smashed In.

There Will Be The Rolling of the Eyeballs, and a disgusted "Pass!" on This Over-Hyped, Tedious Vision of Nihilistic Puss.