After two days of fighting, the Confederates had been unable to strike a decisive hit on the Union forces. Lee had hit the Union on both flanks and been repulsed at very high cost. On July 3, 1863, Lee made one of the worst strategic calls in the history of warfare. He called for General Longstreet to marshall 15,000 rebels into a direct frontal assault at the center of the Union lines. Known as Picket's Charge (but it really should be known as the Picket-Trimble-Pettigrew Charge because George Pickett was just one of three corps commanders on the field that day), Lee's act of messianic hubris led to over 7000 casualties in less than an hour.

Here is the perspective of the Rebels as they came out of the tree line facing the entrenched Union troops on Cemetery Ridge to the east. Their destination was the copse of trees in the center of the picture. The 15,000 men had to walk over a mile of open field with no cover. Their lines were ripped open by artillery fire from Little Round Top but also all along the heights on Cemetery Ridge. 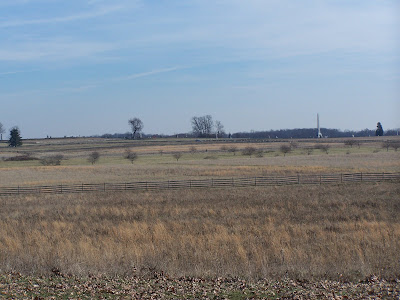 The Confederates had expected that their pre-charge cannonade would take out the fence on the road at the base of Cemetery Ridge. It didn't. Those surviving Confederates who made it as far as the road, found themselves pinned down by the fence. They were then savaged by cannister fire from the Union side. And then the Union infantry stood up in rows and fired round after round into them. 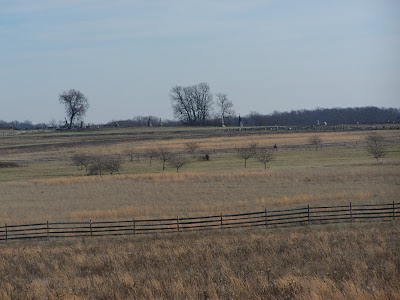 A memorial to the North Carolina troops who were part of the fateful charge. 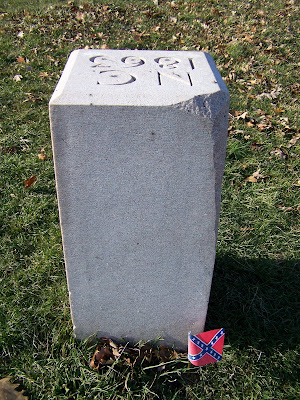 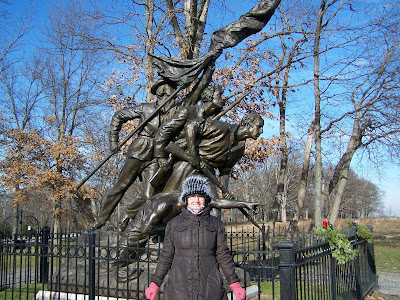 Another Confederate perspective of the field from which one third of the 15,000 men started out. The copse of trees is just to the left of center. Even under intense canon fire, the Rebel troops executed several perfect turns so that they all came together just north of the copse of trees. 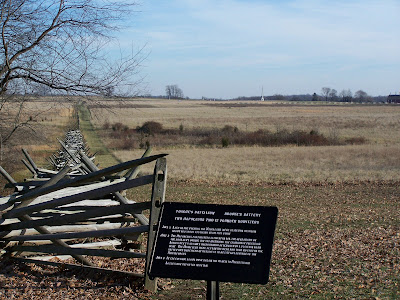 Here is the monument to the evil genius of the slavery forces, Robert E. Lee. (That's all the "malice towards none" I've got for the guy and his damn cause.) 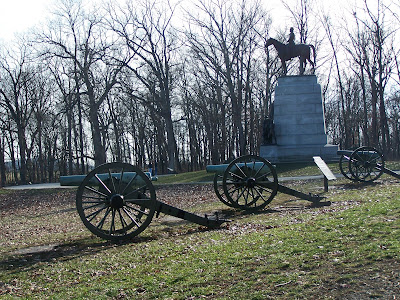 Moving over to the Union side on Cemetery Ridge, here is a monument to an Irish priest whose name I don't remember, but who was chaplain to the great Irish brigades who fought so hard for the Union at Gettysburg. There was some connection to the University of Notre Dame with this priest - maybe he was the Founder? Anyway, this was my favorite monument on the field. There was something very comforting about the hand raised in blessing after all the reminders of death and suffering. This monument said to me that God was here even amidst the carnage and terror of the battle. 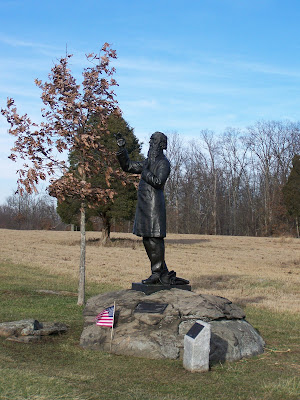 Here is the copse of trees and the monument that represents the "high water mark of the Confederacy." Of the 15,000 who started on the P-T-P charge, only a few hundred made it to the angled stone walls just north of this spot. After this point, the Confederate army was basically playing duck and run the next two years until the end of the war. 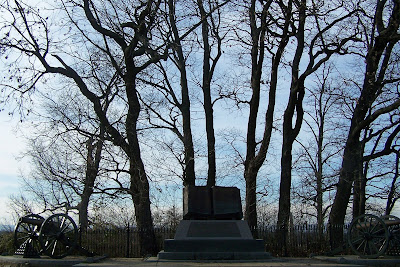 I can't remember what this shot is of, but I think it is probably a diagonal view of "the angle." 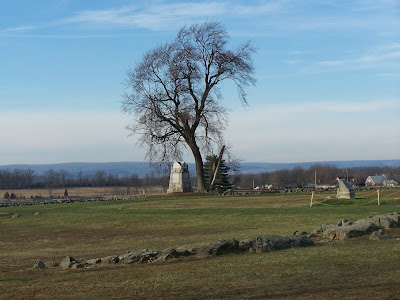 The National Park Service has preserved lots of cannons and cassions left on the field from the battle. 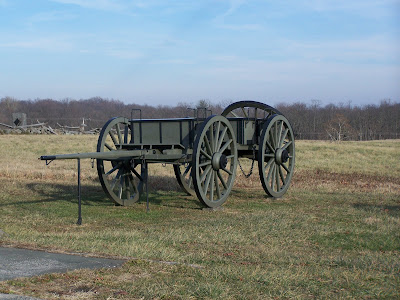 Certainly the most impressive state monument of the hundreds on the field is this one to the men from the State of Pennsylvania who died fighting against the Rebel invasion of their state. 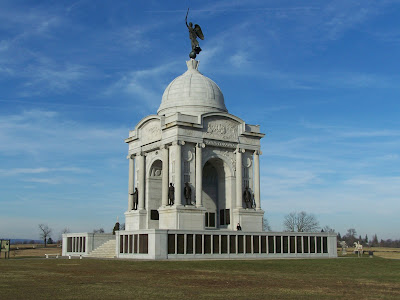 I end with a shot of the monument which tells the story of the American Civil War. It is from the state of Maryland which was divided politically half slave and half free. The monument depicts two brothers who were on opposite sides of the war, and met on the field at Gettysburg. Very moving. 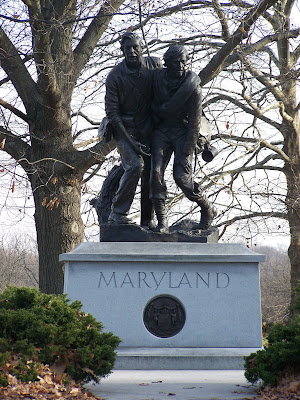