I'm excited. I just got a message from my business partners at Origin that the paperwork has gone through, and we officially have to option on this book: 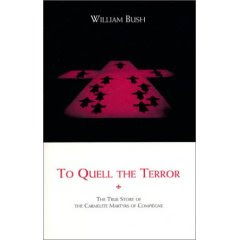 The title there is To Quell the Terror: The Mystery of the Vocation of the Sixteen Carmelites of Compiegne. Set during the darkest days of the French Revolution, this story is about sixteen women ages 27 to 78 who brought about the end of the Great Terror by an offering themselves body and soul to save the people of France. (Go here to buy a copy of the book from Amazon.)

The nuns' story was fictionalized in a book called The Song at the Scaffold, by Gertrud von LeFort, and then turned into a beautiful opera called The Dialogues of the Carmelites. But the real story - which is kind of The Mission meets Amadeus - uh, with women - has never been dramatized.

I will be writing the screenplay while Origin puts the project in development (ie. looks for financing). And we can brood and pull our hair out over the financing tomorrow. Today, I am really, really happy and honored that I have the grace to work on this project.

Last week, I was in a room with six Europeans who have about $30 million euros and are looking to start producing movies. They are mostly new at the whole thing, but somehow they got the cash together. And one of the guys at the meeting asked me, "So, can you tell me, what is the process to get an idea into a story and then into a movie?" He asked me like it was a thirty second sound-bite. It's not.

So, I shrugged and said, "It's too big a question for this moment. It's like asking an architect, "What's the process to get a 30 story sky-scraper together?"

I thought it would be fun to use this blog to share the journey of this project from idea to script which is the first lynchpin part of the process of getting a movie made. I am doing this also because it astounds me how little respect Christians tend to have for the research and writing phase of movie-making. Occasionally exhilerating, writing is mostly grueling. And there are no short-cuts to excellence. And if you want to write something that might really have a radiance about it, you have to dig very deep into your own memory, intellect and psychology to find some treasure to share. As my mother used to say to me very often to me because I was a lazy adolescent, "Things that don't cost you anything are probably not worth anything either."

So, I am going to call these upcoming entries, TQTT: The Story of the Story. Stay tuned.

P.S. And no, because of the strike, I don't have an official deal on this project yet. I've been researching it for about a year, which was enough to develop a pitch to get Origin on board. I am working on spec officially until the strike resolves.