BSG is Great...But is it Good? 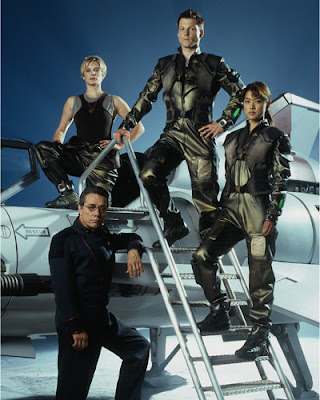 I am already on the record as being a big fan of Battlestar Galactica. (And in keeping with the 32nd Law of the Cosmos, "[Because I gave God ten years of my youth in a convent,] I get everything I want" I did manage to obtain Season 3. So the following probably has spoilers of all three seasons.) I think it is a very successful show on the most important levels that go into a good television series. And even more than just a good show, where most network television shows today have great production design, acting and overall style, Battlestar Galactica brings something else to the table that I would summarize as complexity.

The story and structure are complex – both in each individual episode and in the over-arching four season story. The characters are complex – as in President Roslin who, just when you think she is a classic paralyzed by politically-correctness liberal, bans abortion and summarily sends a Cylon shooting out the airlock. But the thing I love most, as someone who is always drawn to a discussion of ideas, is the complexity with which the series handles social, political, and psychological ideas.

I really appreciate being given the job as an audience member to have to do my share of the thinking. It’s so cool the way the creators let the story unfold as the choices of the characters, but with leaps in time and reasoning, such that I have to stop and put together what must have happened in the life and mind of the character off-screen to get them to that place. (An example is most of the relationship of Kara and Lee, who we follow through the trajectory of their choices without a lot of how they are getting from choice to choice. I find myself asking every few episodes – okay, what did we miss here?)

And the complexity just gets better when it is echoing all the issues of post-9/11 geo-politics. It is very hard to watch BSG and not want to have discussions afterward about politics and war.

I think the net result of the show’s complexity is to move the audience away from self-righteousness and towards compassion. Because these issues are fundamentally complex, despite the highly polarized climate these days in which each side just wants to point at the other and dismiss them as stupid. As in, "The War in Iraq is stupid. We should get out." Or, "It's stupid to think that everybody everywhere doesn't want American style democracy." Both of these are over-simplifications that encourage people to posture about with a sense of superiority. There is something about the way BSG establishes ambiguity in so many of the issues that leaves me really, really glad that I'm not the one who has to make the call that the characters are having to make. There is no possibility of posturing simple and superior. The show makes me want to pray for people with power. And to be clear, it’s not that BSG makes things like torture ambiguous. But it definitely gives you a sense of how and why terror and social disorder drive people to try torture as a solution. Or else stealing elections. Or resorting to martial law. Or trampling on civil liberties. 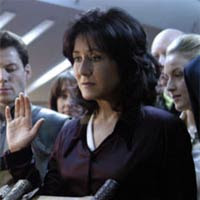 However, in the interests of seeing the forests as well as the trees, I have been brooding over whether the worldview of Battlestar Galactica can ultimately be reckoned moral or immoral. What is the show’s underlying presumption about human life, and can it be said to be true or a lie? And if it is a lie, it is the kind of lie that is appropriate in art – a false vision that would provoke people to seek out the truth?

Right now, I don’t know if Season 4 of Battlestar Galactica can rescue the show from one very deep ethical problem in terms of ultimate worldview. (But I am open to hearing from some of you longer-standing fans as to what I might be missing.) In rendering the Cylon “skin jobs” so indistinguishably similar to human beings, doesn’t the show diminish the sacredness of human life? Particularly with the revelation at the end of Season 3 of the four beloved characters to be Cylons, hasn’t the show now waded into the big lie that human beings are basically material beings without a spiritual dimension? Because clearly, spirit cannot be built. So then, if you can build a robot that is indistinguishable from a human, it is because the human actually has nothing actually spiritual in its definition. And then the meaning of Battlestar Galactica would be a lie (although, as I noted above, not necessarily an illegitimate work of art). 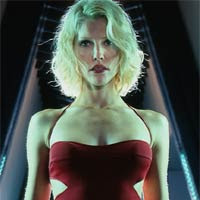 It seems to me that the series needed to plan in from the very beginning some basic quality in the Cylon characters that separates them from humans. It needed to be some kind of default reflex or failure to compute something that proceeds deeply from the human non-material soul. If Baltar was really that smart, he would have approached the problem of distinguishing Cylons from this aspect, looking for a deep spiritual/empathetic/yearning disconnect in the Cylons - as these are the most defining qualities of human life. (And even if this escaped Baltar, it shouldn’t have escaped the series writers, and the audience should have been putting it together.)

Now, until near the end of Season 2, the Cylons seemed to me to differ from the humans on the level in which the machines were perfect pragmatists. The humans are unpredictable in so far as their empathy and narcissism cause them to make un-pragmatic choices. The Cylons are calculating, but in a pragamatic way in which being calculating logically serves their ends. Humans do illogical things that don’t serve an ultimate end. In fact, relentlessly retaining an ultimate end in mind, could also be regarded as a distinction between Cylons and humans. But the pure pragmatic aspect of Cylonness gets completely lost with Boomer’s love of Helo, and Caprica 6’s infatuation with Baltar, and Number 3’s search for transcendant meaning until I don’t see them acting logically even most of the time, nevermind all of the time.

So, there are three ways to engage this ethical problem for the series that I can see:

A) The series creators have put the Missing-link factor in, and I am just not sharp enough to see it. There has been some fundamental disconnect in all the Cylons that has been right up there on the screen for us to see all this time. (Going to be really hard to sell that now if Tigh and Tyrol are really Cylons as we have watched them, among all the characters, struggle with deep existential conflict.)

B) The Cylon “skin-jobs,” in so far as they are a blend of organic and synthetic
material, are actually human clones. That is, in the same way that God infuses a soul in a human that is conceived in a test tube, in using organic parts, the Cylons are actually replicating humans with robotic parts. But they are fundamentally human. (Although they are a kind of human that has the power to “download memories” to other clones.)

I actually love this solution as it means that the “skin jobs” are just another dehumanized group like so many others in history that have been persecuted as being “non-human” (like Jews, women, blacks, etc.).