Too Weird Not to Be God Portent 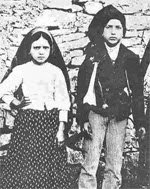 So, I am in the middle of working on writing a mainstream feature-length movie about the apparitions that took place at Fatima, Portugal in 1917. I discovered a few years ago that Bl. Jacinta, one of the two visionaries had died on Feb. 20th, and took that as a kind of cool divine thumbs-up, because February 20th is my birthday.

But just yesterday, I discovered that Feb. 20th has been made the Feast day of both Blessed Jacinta and Blessed Francisco (Jacinta's older brother and one of the other visionaries).

It really hit me. Like one of those moments when you get the sense that somehow you are stumbling blindly into destiny. Or that Somebody really is in control of the whole mess.