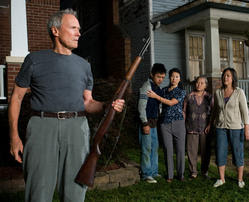 I shocked myself this week by really enjoying Clint Eastwood's latest offering Gran Torino. I thought it was charming in many places and it made me laugh out loud several times. The violence was surprisingly unbrutal for an Eastwood film, and most refreshingly of all, unlike almost all of Eastwood's projects, Gran Torino knows what it is about storywise and thematically and stays on target. The film has none of Eastwood's trademark, "character motivation confusion mistaken for internal conflict" that I usually end up scratching my head at from Clint.

On top of that, the film is unabashedly patriotic and basically hopeful about at least a segment of the generations now coming of age. There is also a very cool and respectful religion sub-plot, in which a priest is actually portrayed as a compassionate, thoughtful and three-dimensional human being.

The main stuff not to like is in the unevenness of many of the supporting performances. There are a lot of cliches riding on the "really bad urban gang members" and the "really ungrateful and worthless adult Boomer children." Clint himself is channeling Dirty harry through much of the film, albeit a 76 year old one, but it is something we haven't seen from him in a while, and it is mostly played for laughs in a way that worked with our audience.

The language is very tough in Gran Torino If you can't stomach the F-word and pretty nearly every racial slur known in sveral languages, you won't be able to enjoy this film. But I did. I recommend Gran Torino as a good and humane story that will get to you in that catharsis of pity and fear of evil way that stories should.