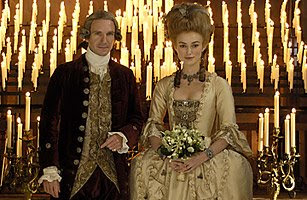 It looks lovely.  So, lovely, you almost forgive the fact that this is a one note tragedy about a lovely, and intelligent young woman who is crushed under the injustice and occasional brutality of unbridled patriarchy.
But the costumes are grrrrrrrrrrrrrrrreat!  And if it doesn't win best costume than whomever spent two years designing and sewing the hundreds of gorgeous dresses and hats on display here will probably jump off the top of the Paramount arches.
It wasn't a mess.  It just didn't go very many places.  It wasn't a story so much as like watching a long drawn out train wreck screeching along the track until you hit the climactic screaming marital rape scene that finally succeeds in breaking the heroine's will to virtue.
The movie seemed to me to be a thinly veiled look at the Princess Di story.  As such, it felt creepily voyeuristic to me.  Ralph Fiennes seemed to have spent hours mastering Prince Charles' strained awkwardness as he selfishly insists that he needs his mistress to live under the same roof as his wife and children.  You could hear Di's soft voice echoing off the theater walls:  "From the beginning there were three of us in this marriage."  There was another line in which a character proclaimed, "Everyone in the world loves the Duchess, except the Duke."
Keira Knightly does well as a manikin for the gorgeous costumes.  Not so well as an actor.  I was never sure what her character was really making of her predicament.  I wasn't sure if she was shrewd or clueless, heroically resolute or coweringly impotent.
In the end, I stood in the parking lot of the Director's Guild and asked my friend, "So, do we recommend this movie?"  She shrugged at me and said, "Well, I wouldn't sit through it again."  I had to agree.  So, it isn't a pass, but it isn't a recommend either.  It's just kind of there.
Posted by WGA Member at 4:49 PM