So Say We All 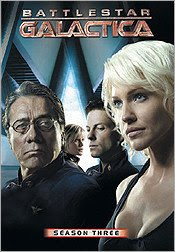 Is there another show on television right now that's remained as consistently good, surprising and relevant as Ron Moore's reimagined Battlestar Galactica? If there is, I haven't seen it. Science fiction though it may be, week after week, Battlestar continues to earn its place among the very best dramatic series TV has ever delivered. Digital Bits

Season 3 is coming on DVD March 18th. There is an hour of deleted scenes on the set including nearly a half hour more of the hurts so good boxing episode "Unfinished Business." While I generally agree that some of the stand-alone style episodes of Season 3 were disappointing ("Hero", "The Woman King," the one about the labor fight with Tyrol, and the flashback one about Adama's marriage failing), the first four episodes of the season were some of the best of the series to date. And then the two episodes on the algae planet were great. And, due to some of the best writing I've ev er seen and amazing work by actress katee Sackhoff (Where did this kid come from and why doesn't she work more?! She's good enough to be a British actress!), Starbuck's climactic episode "Maelstrom" was breathtaking. It was so riveting I felt like it flashed by in just a few minutes.

Any way you slice it up, Battlestar Galactica delivers the goods. This show has NEVER been afraid to take risks and turn everything you think you know on end. It dares to be bold and original, even to the point of changing its tone and characters in absolutely fundamental ways. It's just been a true delight to watch thus far. If you're new to Battlestar, I highly recommend that you go back and start watching from the beginning on DVD - this is not a show you can truly appreciate if you start in the middle. The first half of Season Four (the show's final season) debuts on the Sci-Fi Channel on 4/4/08, with around ten episodes. Because of the recent writer's strike, the remainder of the season (which resumes production next week, as it happens) probably won't air until early 2009. [NOTE FROM BARB: Kill me now.] In any case, you can bet that Ron Moore, David Eick and the writers are cooking up a real rollercoaster finish for this series. I, for one, absolutely can't wait to take the ride. Bring it on! Digital Bits

I don't have much more to add here to what I've already written about this show (I really do, but all of my friends who know about the show are getting really sick of hearing me talk about it, and anybody out there who has never seen it thinks I've lost my mind....the way I did about BSG fans before I became a believer...), but I did want to post the above for any others "of the race of Joseph" who will be pouring over every little extra feature the DVD holds.

Deeply pathetic and proud of it.
Posted by WGA Member at 10:32 AM